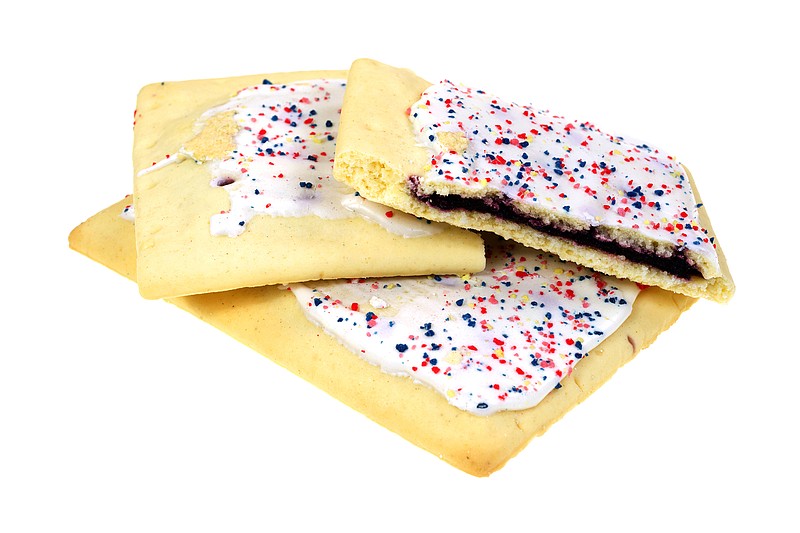 Is a raw Pop-Tart now considered a gourmet treat? (Dreamstime/TNS)

A new ad for Pop-Tarts has revealed the depths to which our once-proud civilization has fallen. It ran on Reddit.

"Split it. Crust first. Straight from the foil. 'The only' civilized way to eat Pop-Tarts."

Raw. In other words, Pop- Tartare.

Sophisticated? Really? It's one thing to say that cold Tarts are for people who've had a long day and don't feel like cooking, but don't pass this off as the equivalent of someone having high tea with a pinky extended.

If eating uncooked, processed-pastry shingles is sophisticated, it suggests there is an element of savagery involved in heating the confection. Imagine the opening sequence to "2001: A Space Odyssey," except the hooting, confused monkeys are capering around a toaster instead of a mute black monolith. One of them sticks his pastry in the slot, and they all stand in amazement as the machine heats up. Finally the Pop-Tart is flung from the slot into the sky, where it turns into a spaceship while "The Blue Danube" plays.

It is not uncivilized to eat your Pop-Tart raw, if you do it properly, with a napkin on the lap to collect the inevitable crumbs. But the idea you go crust first, like it's some sort of delicacy, makes you wonder whether the target market has the palate of an oven mitt. No. You fold it, sundering the tart, and work from the middle to the edges, and then you give the edges to the dog.

It's a matter of taste, I suppose. The "crust" of a Pop-Tart is the least appealing segment, to me; it's like baked newspaper. In 1967, they added frosting because they'd discovered a new process that kept the frosting from melting in the toaster. I believe this process was later used to make the heat shields on the space shuttle.

Little did we know there was an R&D facility where scientists in white coats worked for years with feverish dedication until they came up with the innovation that would upend the Pop-Tart paradigm once more. Sprinkles. That may have been the pinnacle of Pop-Tart innovation.

Truth be told, it's been years since I've had a Pop-Tart. I know actual adults who still love them. I won't judge you if you do -- well, I will, but in that Minnesota way where you nod politely and change the subject and tell your partner all about it later and agree it really does say a lot about you. But other than that, no judging. I don't care if you can't muster the initiative to throw it in the microwave, what with all the work of having to open the door and push the buttons, and then you have to stand there for 30 seconds, looking at your phone.

Just don't tell me eating it raw is sophisticated. If that's the case, then spraying an unwrapped Slim Jim with Pam and sliding it down your throat is fine dining. I think this is Kellogg's' way of admitting its target market doesn't even own toasters, because that's for people who have, like, mortgages.

I would also like to note that none of the above applies in any way to Toaster Strudels, which have a separate frosting packet that lets you drizzle the sugary spackle as you please. I like to make elegant zig-zag patterns.