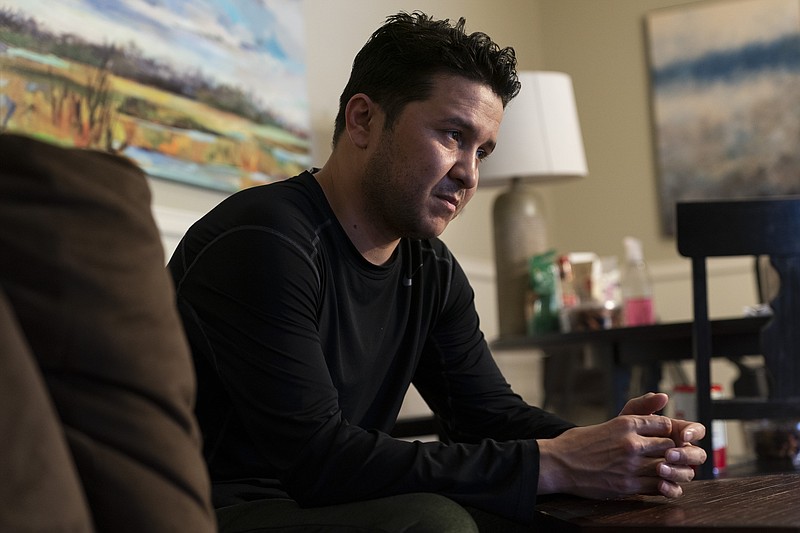 Hasibullah Hasrat, 29, is interviewed at his apartment, in Hyattsville, Md., Wednesday, May 4, 2022. (AP Photo/Jacquelyn Martin)

WASHINGTON (AP) -- Taliban forces had taken the Afghan capital. Crowds of panicked people thronged the airport. And a young man who had worked as a subcontractor for the U.S. military faced a terrible choice.

Hasibullah Hasrat, after having navigated the chaotic streets and Taliban checkpoints to make it inside the airport, could either go back for his wife and two young children or board an evacuation flight and get them later. Not taking the flight likely meant none of them would get out of Afghanistan.

Hasrat's decision haunts him. He is in the U.S., one of more than 78,000 Afghans admitted into the country following the U.S. troop withdrawal in August that ended America's longest war. But his family hasn't been able to join him. They're still in Afghanistan, where an economic crisis has led to widespread hunger and where Taliban repression is on the rise.

"My wife is alone there," he said, his voice breaking as he describes nightly phone calls home. "My son cries, asks where I am, when am I coming. And I don't know what to say."

It's a reminder the journey for many of the Afghans who came to the United States in the historic evacuation remains very much a work in progress, filled with uncertainty and anxiety about the future.

Afghan refugees, some of whom faced possible reprisals for working with their government or American forces during the war with the Taliban, said in interviews they are grateful to the U.S. for rescuing them and family members.

But they are often struggling to gain a foothold in a new land, straining to pay their bills as assistance from the government and resettlement agencies starts to run out, stuck in temporary housing, and trying to figure out how to apply for asylum because most of the Afghans came under a two-year emergency status known as humanitarian parole.

"We are not sure what may happen," said Gulsom Esmaelzade, whose family has been shuttled between hotel rooms in the San Diego area since January, after spending three months at a New Jersey military base. "We don't have anything back at home in Afghanistan and here we also don't have any future."

It's taken a toll. Esmaelzade said her mother has had to be rushed three times to the emergency room when her blood pressure shot up to dangerous levels. The younger woman attributes it to the stress of their lives.

Then there are more mundane challenges that are nonetheless daunting for many Afghans. They include learning English, navigating government bureaucracies and public transportation, and finding a job.

There is also the isolation for those, like Hasrat, who came alone.

"I don't know anyone here," he said in the apartment outside Washington he shares with two other evacuees. "I have no friends, no family, no relatives. I just live with my roommates and my roommates are from other parts of Afghanistan."

Some have managed to get established.

"But there are many more who are not doing fine than are doing well," said Megan Flores, executive director of the Immigrant & Refugee Outreach Center in McLean, Virginia.

The experience of the evacuated Afghans is not unlike what refugees have historically faced in coming to the United States. In some ways it's a preview for the up to 100,000 Ukrainians who President Joe Biden said will be welcomed, also in many cases on two years of humanitarian parole.

Afghans on humanitarian parole must apply for a way to stay in the country such as through asylum. It's a time-consuming process that typically requires finding an immigration attorney, at a cost of thousands of dollars not readily available to most refugees unless they can find someone to do it pro bono.

The Department of Homeland Security said about half of the 78,000 likely will ultimately qualify for the special immigrant visa, or SIV, program. It grants permanent residency to people, along with their immediate family, who worked for the U.S. government. Hasrat hasn't been able to secure an SIV, at least not yet, despite his work as a subcontractor setting up transmission lines for the U.S. Army.

Congress could resolve the situation by passing the Afghan Adjustment Act, which would enable evacuees to apply for permanent residency after a year in the country, similar to relief granted in the past to people from Iraq, Cuba and Vietnam. Biden recently gave the effort a boost when he endorsed the idea of adding it to an upcoming Ukraine aid bill, a move welcomed by a coalition that includes veterans, religious organizations and resettlement agencies.

"They are facing a ticking time bomb of what happens if they don't get SIV or asylum status," said Krish O'Mara Vignarajah, president of Lutheran Immigration and Refugee Service. "Do they get deported back to Afghanistan and into harm's way?"

In the meantime, Afghans are trying to stitch together new lives as public attention has shifted to Ukraine and other matters. At a recent job fair in Alexandria, Virginia, there were hundreds of evacuees, including Arafat Safi, a former senior official in Afghan's foreign affairs ministry who came to the U.S. with his wife, four children and mother.

He's hoping to land a job in project management or international development, to use an education that includes a master's degree from the U.K. So far, he's landed a position as a Pashto-English interpreter and is delivering packages for Amazon on the side while his wife, Madina, works in the bakery section of a supermarket.

Safi said he still hopes to find a better job and is eager to get permanent residency. But he never complained in a lengthy interview at the family's apartment in Alexandria. An intricate and vibrant Afghan rug -- the only possession the family brought from home -- occupies a prominent place in the living room.

"I'm very lucky to be here, to be welcomed by the U.S. society. I met a lot of friends here who are checking on me almost every day," said the 35-year-old Safi. "And it's amazing. But there's a small part of me that misses Afghanistan and that misses my people."

Hasrat said he has little time to think about anything other than his family back home and the danger they face from the Taliban. A 29-year-old former competitive boxer, he rides a bike to his job as an administrative assistant at a medical office. After taxes and the money he sends home, he barely has enough to pay his bills. His roommates, who are still learning English, have even less and have trouble making the rent.

Most nights, Hasrat waits until it's late enough to have a video chat with his family. On one recent call, he tried to join the celebration of his children's birthdays but was sad to realize his daughter doesn't even know him.

"I am telling them that, 'yeah, I am happy,' because if I told them my situation here they will be sad," he said. "But if no one is there to take care of your wife, how can you be happy?" 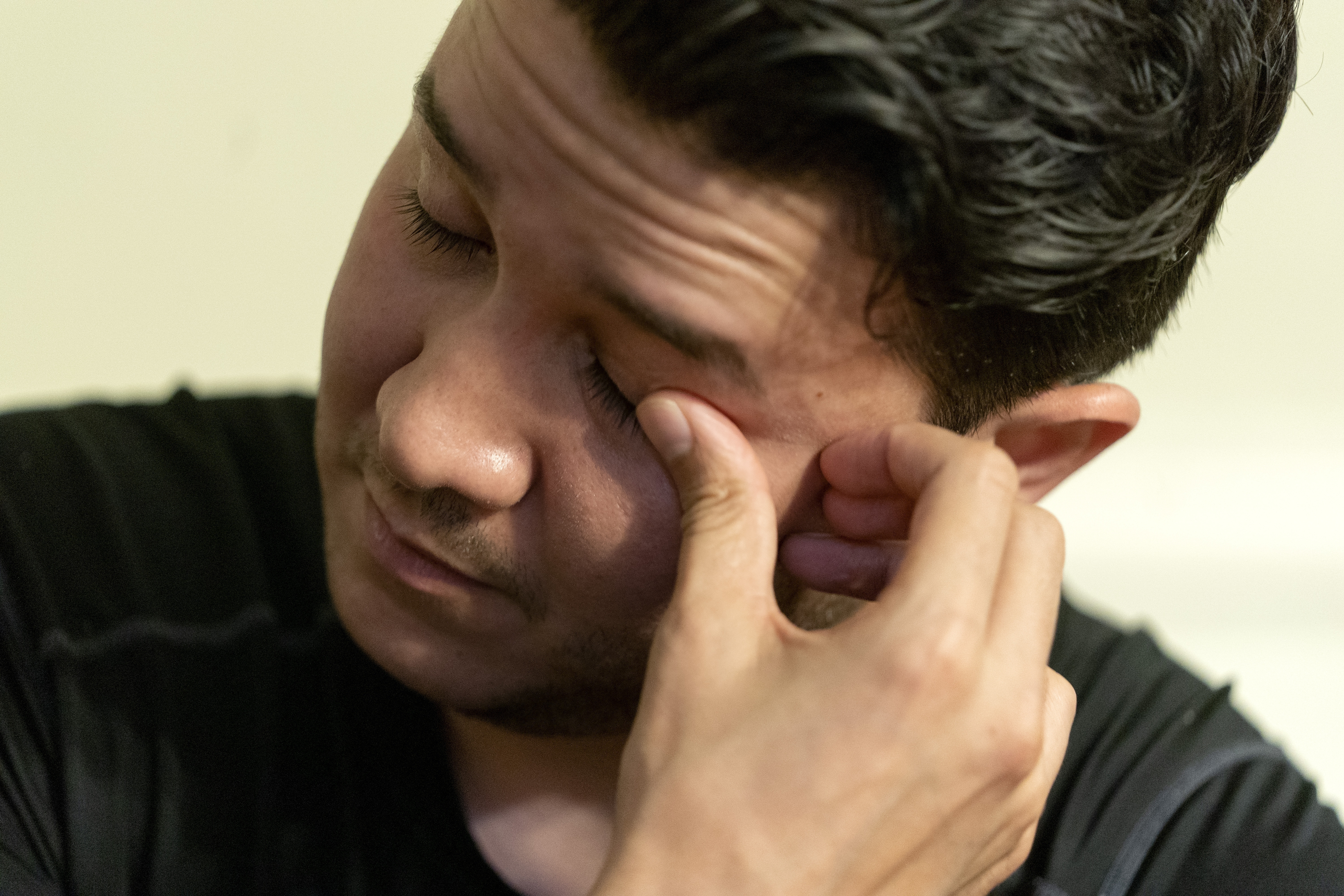 Hasibullah Hasrat, 29, becomes emotional talking about his family, who he has been separated from for a year, at his apartment in Hyattsville, Md., Wednesday, May 4, 2022. (AP Photo/Jacquelyn Martin) 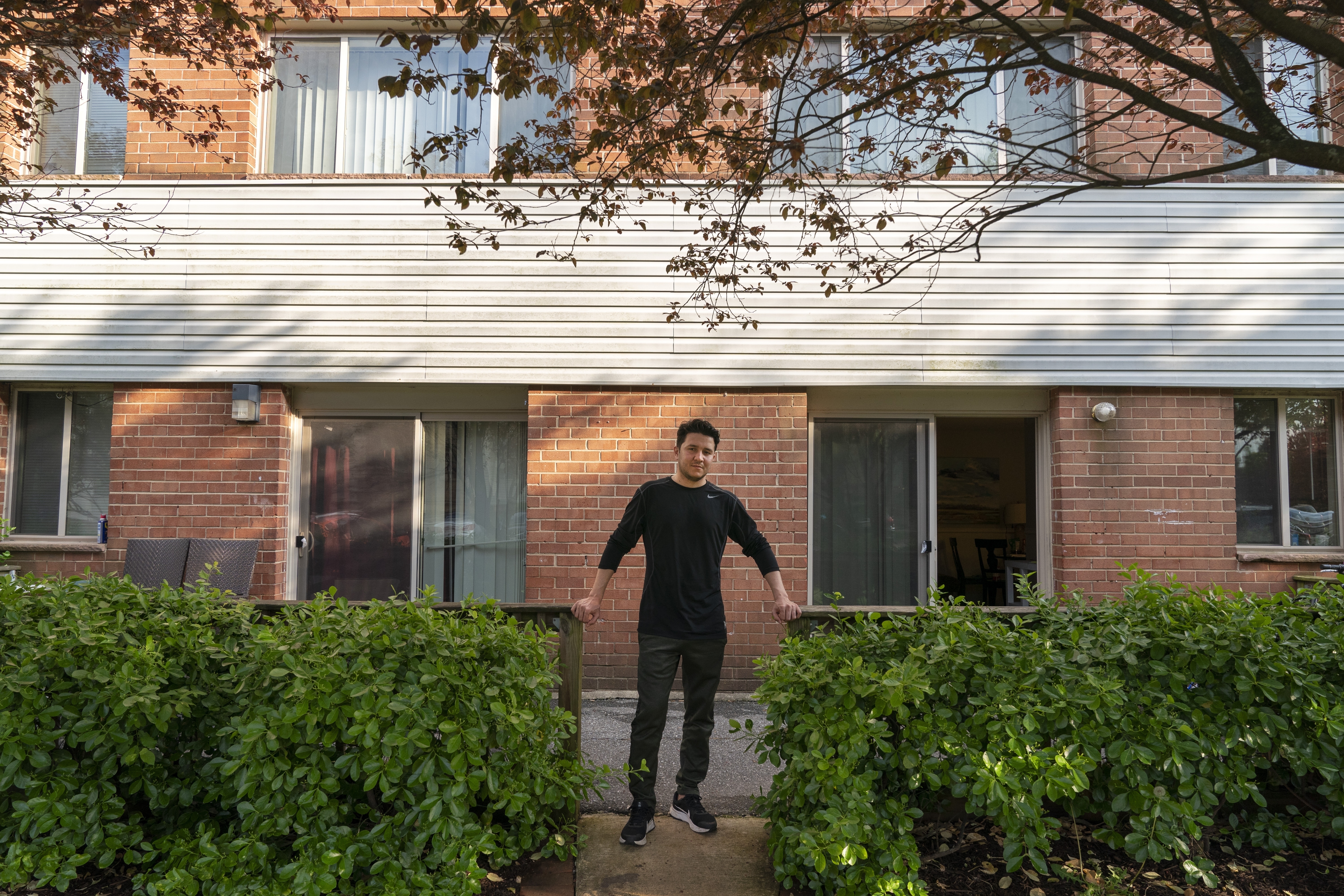 Hasibullah Hasrat, 29, poses for a portrait at his apartment in Hyattsville, Md., Wednesday, May 4, 2022. (AP Photo/Jacquelyn Martin) 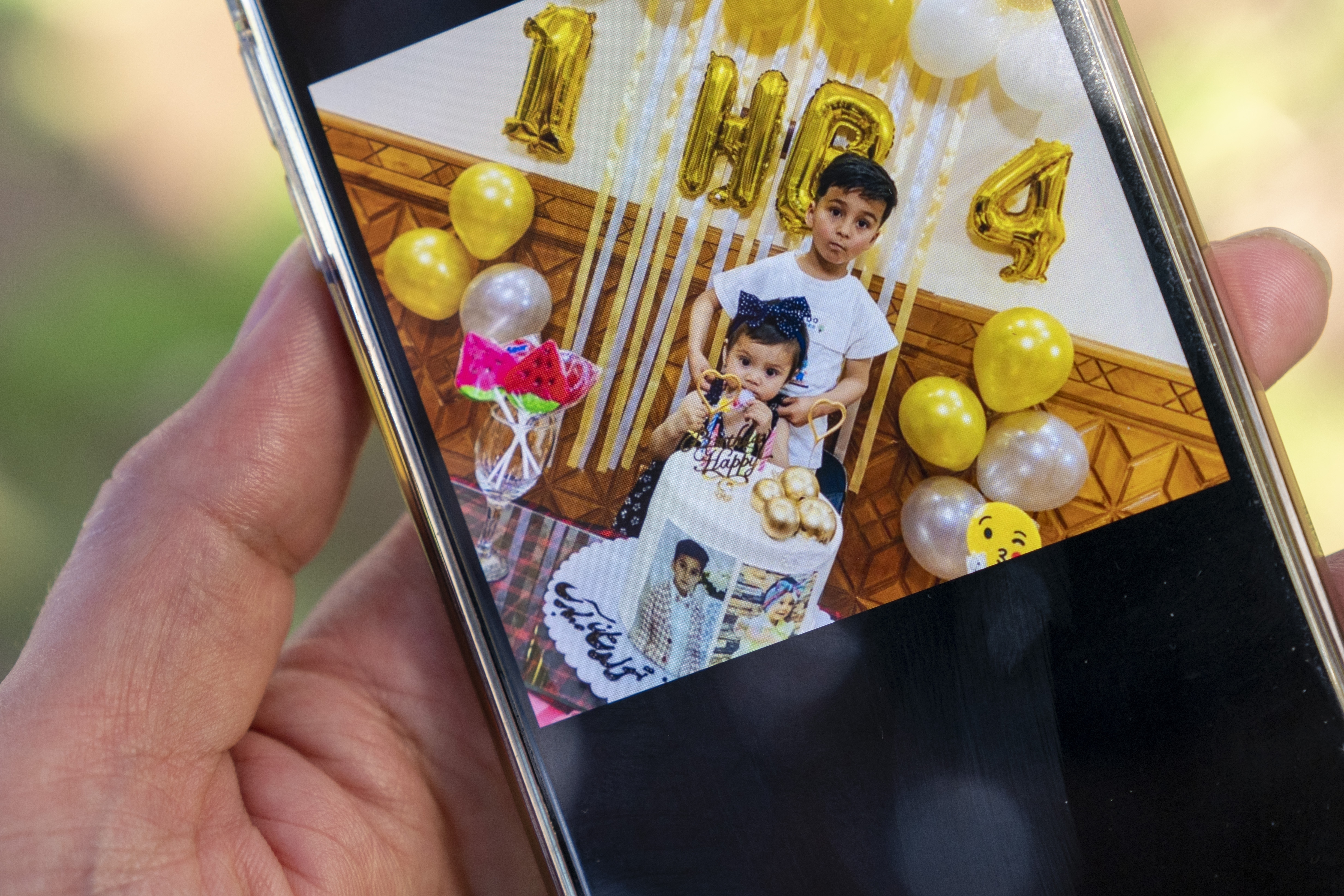 From his apartment in Hyattsville, Md., Hasibullah Hasrat, 29, holds his phone showing a photograph of his children, Jamalnaser, 4, and Elina, 1, Wednesday, May 4, 2022, sent to him by his wife in Afghanistan from the children's joint birthday party this April. Hasrat has been separated from his children for so long that his 1-year-old doesn't recognize him and his 4-year-old asks him each time they talk where he is and why he cannot see him. (AP Photo/Jacquelyn Martin) 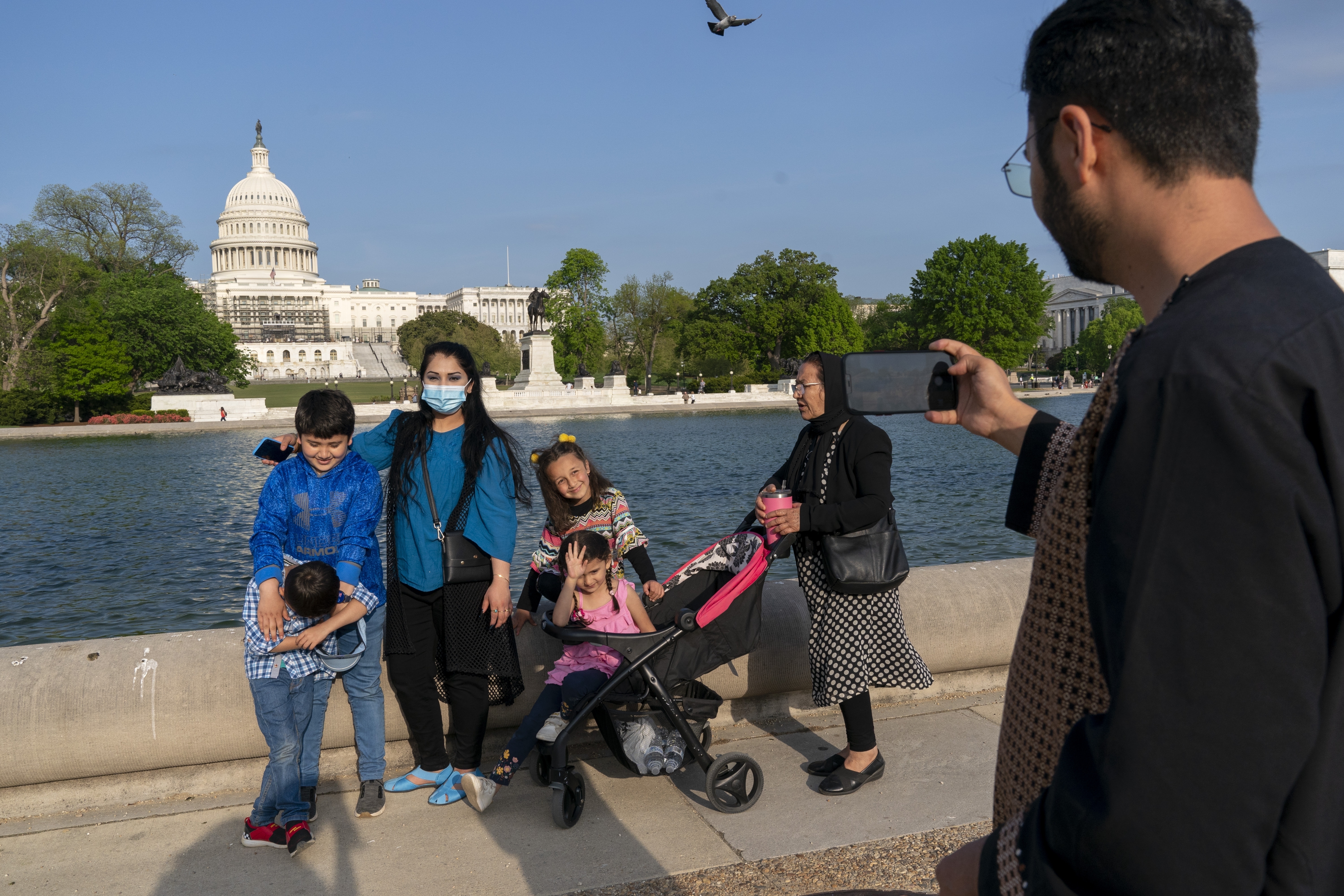 The Safi family celebrates Eid by taking family photographs on the National Mall, Tuesday, May 3, 2022, near the U.S. Capitol in Washington. The family was evacuated from Afghanistan and is trying to make a new life in the U.S., while in immigration limbo. (AP Photo/Jacquelyn Martin) 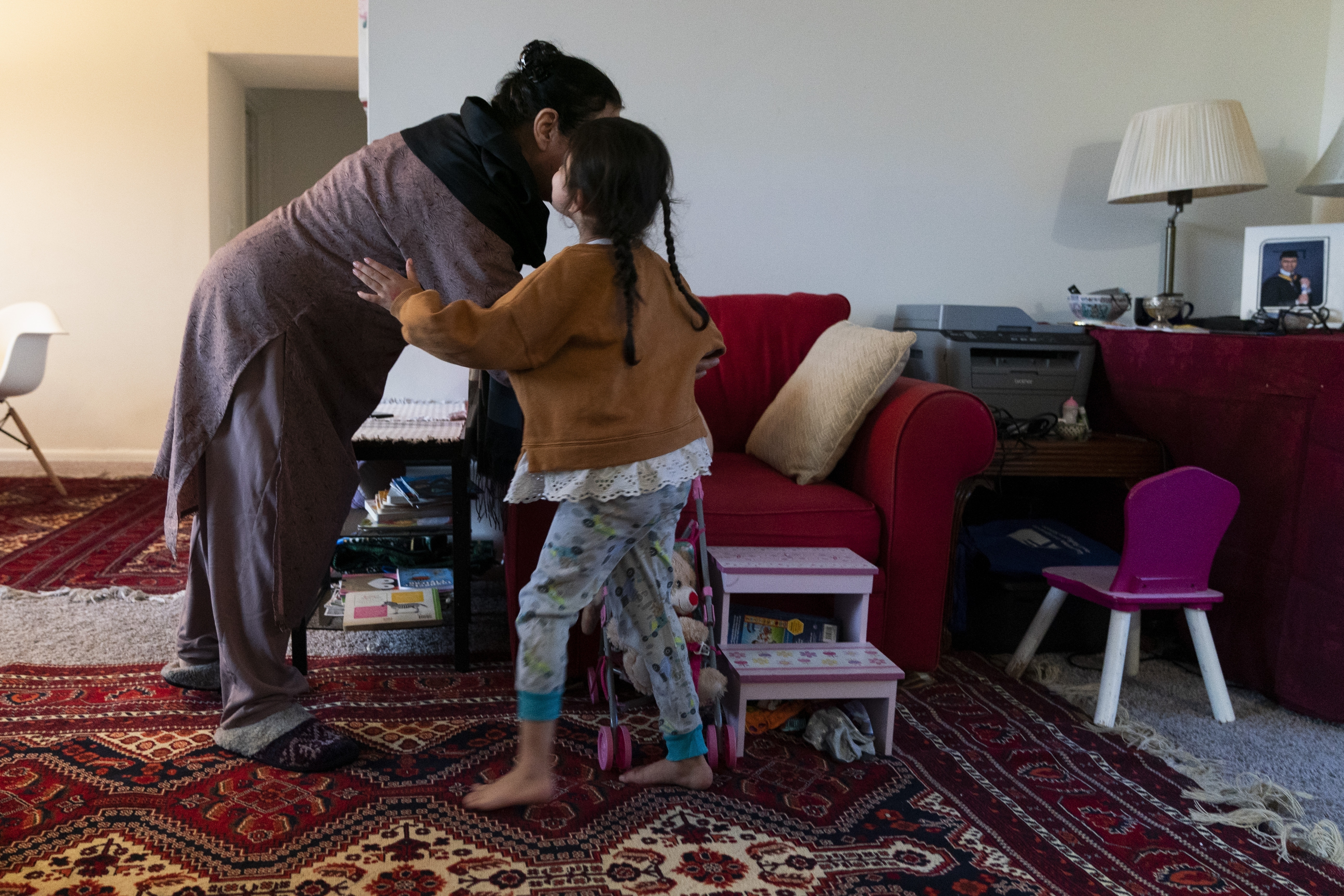 Asenat Safi, 4, kisses her grandmother Fawzi Safi, 71, at the family's apartment in Alexandria, Va., Thursday, April 7, 2022. The family was evacuated from Afghanistan and is trying to make a new life in the U.S., while in immigration limbo. (AP Photo/Jacquelyn Martin) 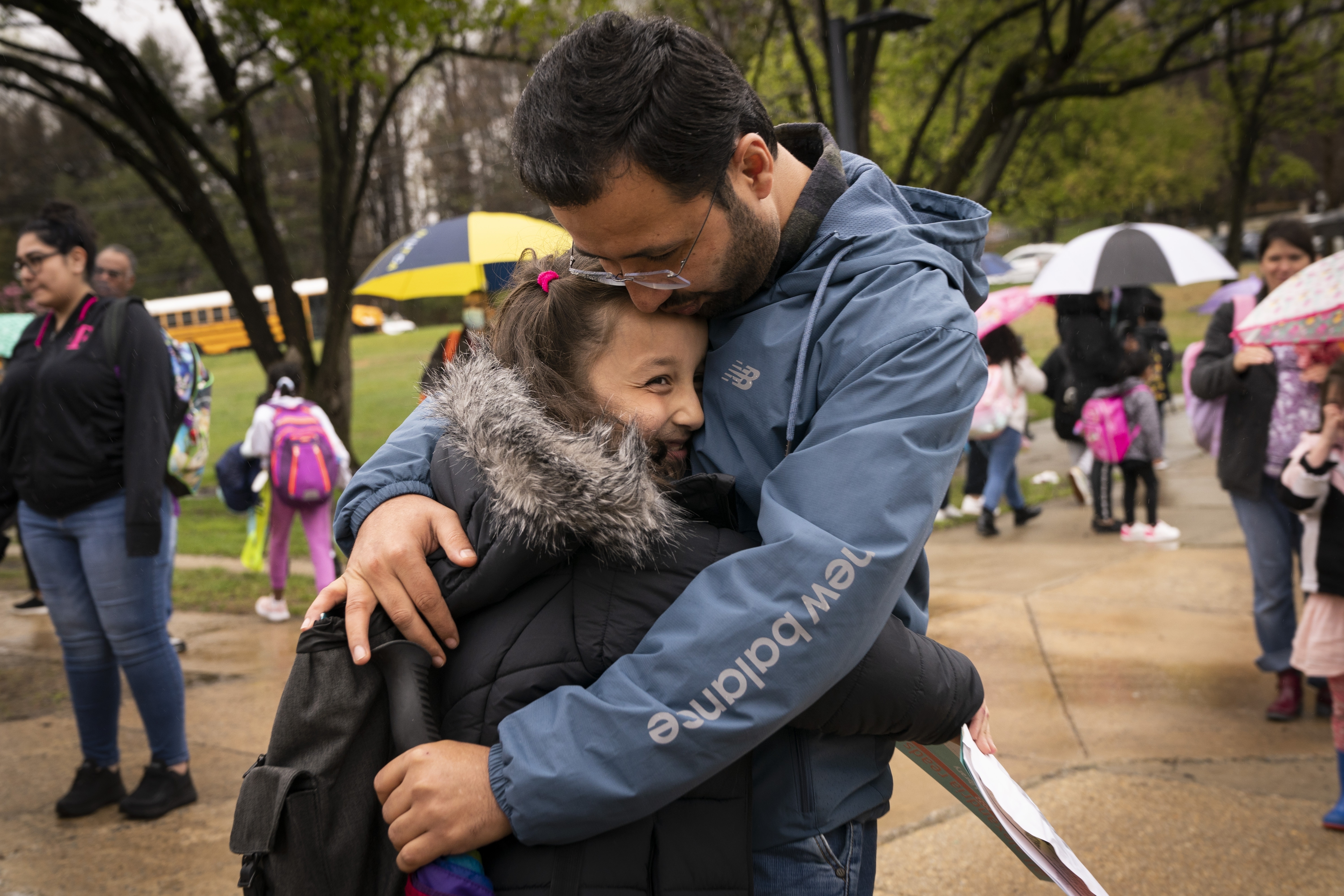 Arafat Safi, is wrapped in a bear hug by his daughter Hanzala Safi, 8, as he picks up his children from school, in Alexandria, Va., Thursday, April 7, 2022. The family was evacuated from Afghanistan and is trying to make a new life in the U.S., while in immigration limbo. (AP Photo/Jacquelyn Martin) 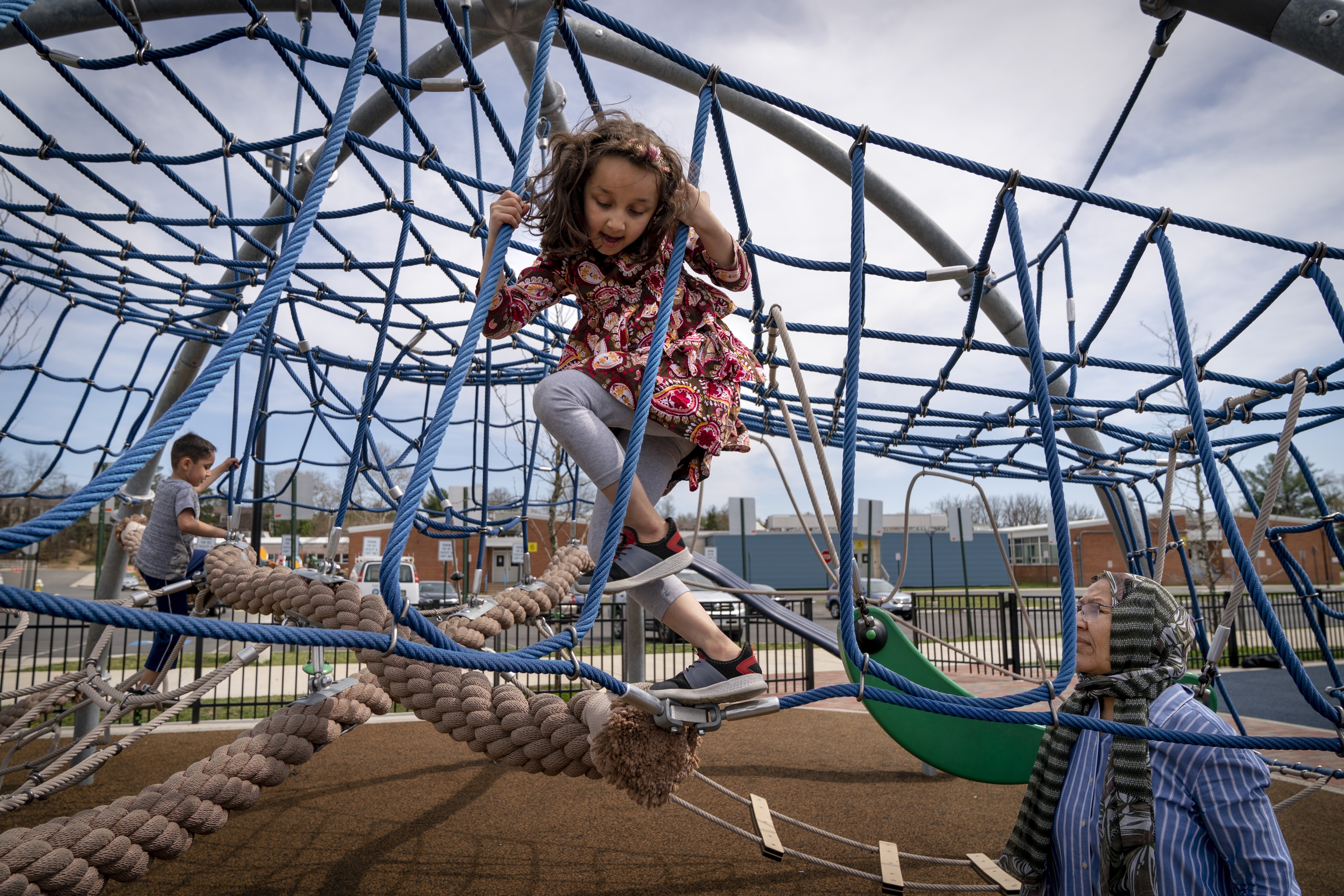 Hanzala Safi, 8, center, and her brother Mohammad Safi, 6, climb a ropes course by their grandmother Fawzi Safi, 71, at a playground in Alexandria, Va., Monday, April 11, 2022. The family was evacuated from Afghanistan and is trying to make a new life in the U.S., while in immigration limbo. (AP Photo/Jacquelyn Martin) 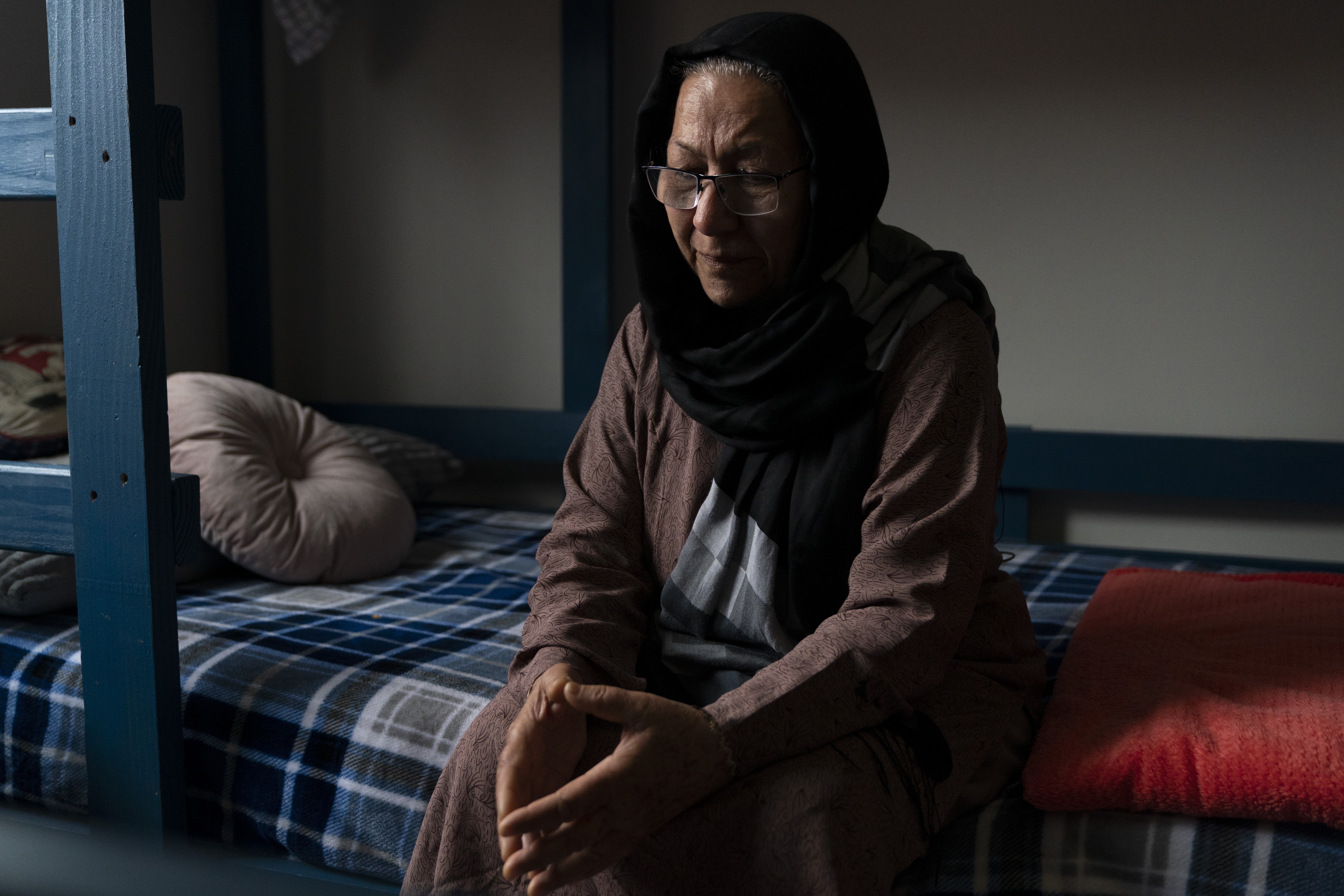 Fawzi Safi, 71, tears up while talking about girls in Afghanistan who are being denied an education, Thursday, April 7, 2022, in Alexandria, Va., where she now lives with her son's family. The family was evacuated from Afghanistan and is trying to make a new life in the U.S., while in immigration limbo. (AP Photo/Jacquelyn Martin) 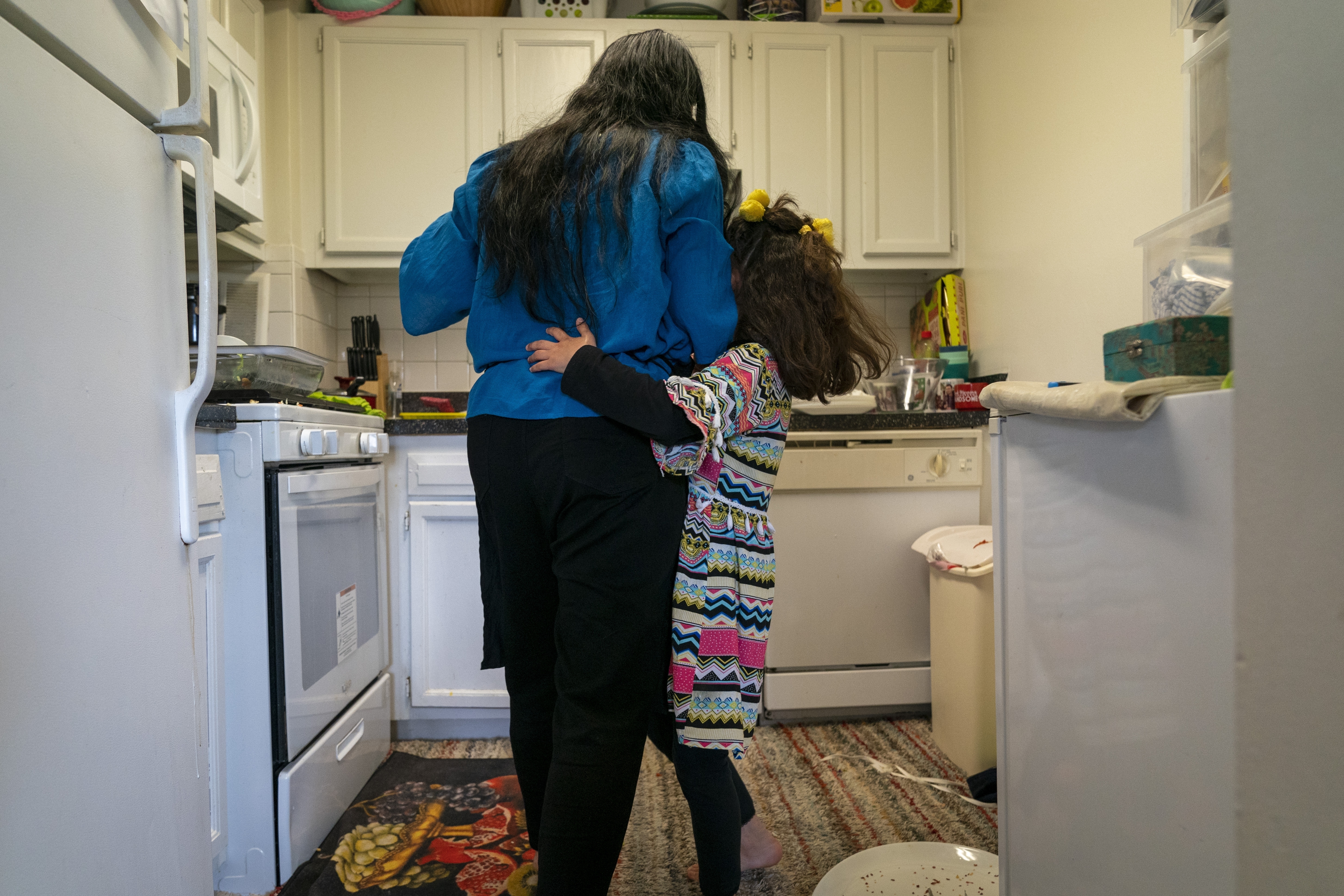