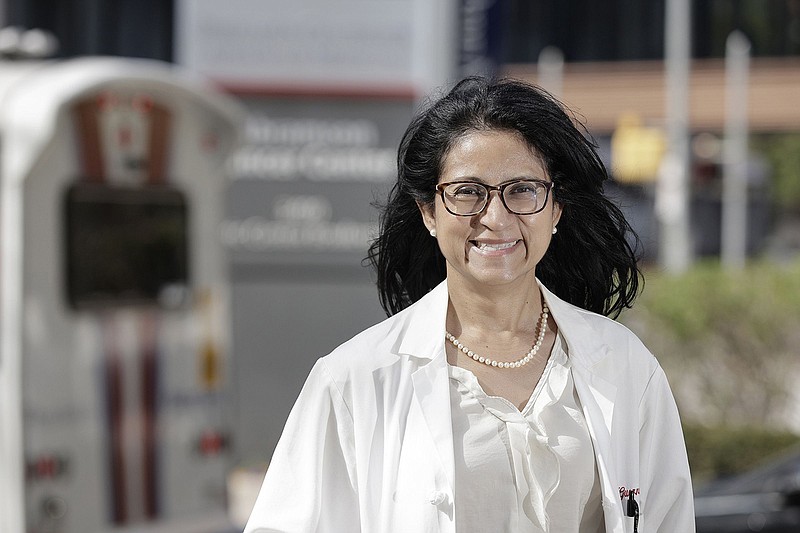 Carmen Guerra, associate director of diversity and outreach at the University of Pennsylvania’s Abramson Cancer Center, is studying how to improve diversity in clinical trials. (Elizabeth Robertson/The Philadelphia Inquirer/TNS)

Clinical trials test the effectiveness and safety of new medications or devices. Yet the vast majority of such studies do not enroll participants that represent America. Black patients account for, on average, just 5 percent of clinical trial participants nationally, according to the American Association of Medical Colleges.

Rutgers' remote experiment with COVID-19 treatments broke down logistical barriers by allowing people to self-monitor symptoms and check in through online portals. Trials typically require participants to make regular trips to medical offices for blood draws and check-ins. These visits can take hours in the middle of a workday, and be inaccessible to people who can't take time off work, or lack transportation or child care.

The pandemic has proven why change is necessary -- Moderna recast its vaccine trials after the initial participant pool was lacking in Black and Latino participants. Philadelphia research hubs now are cutting a path to more equitable clinical trials to address the deep racial disparities in the U.S. health-care system. Rutgers, the University of Pennsylvania, and Fox Chase Cancer Center are among the institutions tackling other entrenched challenges involved, including racism, distrust of medicine, and inadequate community connections.

"The landscape for clinical trials research and participation in clinical trials is dramatically different than it was pre-COVID," said Reynold Panettieri, director of the Rutgers Institute for Translational Medicine and Science.

Research has found social determinants of health, such as racism, stress, food insecurity and neighborhood safety, are the leading reasons why people of color experience more severe illness compared with white people. Genetics also can affect how people respond to certain cancer treatments.

"You can't say you have a new drug and it works on everyone," said Carmen Guerra, associate director of diversity and outreach at the University of Pennsylvania's Abramson Cancer Center. "It leaves primary-care doctors and oncologists in a difficult position when we're trying to treat a cancer patient who is Black or Latino."

For instance, a medication used to treat leukemia can be toxic for patients who have a specific genetic mutation because it slows metabolism and allows dangerous ingredients to linger in the body. The mutation happens to be most common among Black patients, she said. The only way to learn whether patients also respond differently to new therapies is to include a broad range of patients in trials.

The stakes are personal for Anita Conner and her daughter, Kerri Conner Matchett, both certified public accountants diagnosed with breast cancer a decade apart.

When Conner learned she had advanced breast cancer, in 1998, she would have never thought to ask about a clinical trial.

Conner, now 65, of Jenkintown, said she didn't know much about breast cancer and didn't know anyone who had it. She is grateful her doctor suggested a clinical trial.

"We don't talk about it in our community," said Conner, who is Black.

Early in the pandemic, the U.S. Food and Drug Administration gave ongoing trials the green light to allow remote participation when possible -- a protocol change that typically requires extensive review.

Rutgers went a step further by making its new COVID-19 clinical trials entirely remote. The approach drew a more diverse patient population -- 30 percent of participants were people of color -- and enabled researchers to draw from a broader geographic area and fill spots more quickly, because it was so much easier to participate, Panettieri said.

"It's sort of always been done at the convenience of the investigator, rather than the patient," he said of trials.

The decentralized trials developed out of necessity during the pandemic could lead to a new standard for hybrid trials that include in-person and remote participation, Esther Krofah, executive director of the Center for Public Health at the Milken Institute, wrote last summer in Health Affairs.

"This year was a time for reflection on changes made to the clinical trials enterprise in response to the COVID-19 pandemic and for more purposefully considering how the system ought to be redesigned," Krofah wrote in an article coauthored by other former pharmaceutical executives.

Clinical trials often call for participants who do not have other health issues that could influence how well the treatment works, or whose illness has not advanced to a late stage. This can exclude people of color, who are more likely to have multiple chronic conditions.

And doctors are less likely to recommend clinical trials to Black and Latino patients, whom they assume won't be eligible, Guerra found in research to be published in June in the Journal of Clinical Oncology.

"These unconscious biases are really underestimating the fact that individuals would want to participate if they were offered," she said.

She offered a solution: standards for when in the treatment process doctors should talk to patients about trial participation.

There are other ways clinical trials could be made more patient-friendly, especially for people of color, said Elizabeth Plimack, deputy director of Fox Chase Cancer Center.

For instance, cancer trials tend to overuse placebo, which is when some participants receive the new treatment and others receive the current standard of care, she said. This uncertainty can turn off those already wary of feeling like they're part of a medical experiment, she said.

In many cases, placebo isn't necessary to test the effectiveness of cancer treatments. And when it is, the trial protocol could inform patients afterward which group they were in.

"There's a 50/50 chance you'll drive there and get an IV of saline," Plimack said of trials that use placebo. "I think we can make trials better for patients."

Another entrenched barrier to diverse clinical trials is a distrust of medicine rooted in a history of medical experimentation on marginalized communities and racism in health care. People repeatedly tell Guerra they don't want to be "guinea pigs" and "test subjects."

"There's a spectrum of trust and you have to earn it," she said.

That starts with validating the fear and mistrust people may have about clinical trials.

When Guerra speaks to communities about clinical trials, her presentation includes slides about Penn dermatologist Albert Kligman's experiments on inmates at Philadelphia's Holmesburg Prison between 1951 and 1974. She shows pictures of the men with patches of skin missing on their backs. Then she talks about how medical research policies have changed to ensure that unethical experimentation never happens again.

Conner and her daughter are involved in a similar ambassador program at Fox Chase Cancer Center.

They go to churches and share their personal stories through the nonprofit they started, Praise Is the Cure, to help people feel comfortable asking questions they may not want to ask doctors.

Matchett, now 47, had a double mastectomy in 2008 to treat her aggressive form of cancer. At the time, she was 33 with a 2-year-old daughter. Almost a decade later, the cancer resurfaced in her lungs, and in 2020, it spread to her spine.

Matchett's first reaction was tears, then gratitude toward her mother, whose involvement in a clinical trial helped doctors learn more about how to treat the next generation of breast cancer patients.

"There was no way I could go through all the treatment procedures my mom did," Matchett recalled. "And the doctor said, "You won't have to do any of that because of all the advancement."

Matchett now has three children, ages 16, 11, and 10, who she says have never known a mother without cancer.

Matchett and her doctors are exploring clinical trial options in addition to chemotherapy, because she wants her children to see her resilience and her determination to help herself and others -- just as her mother did. 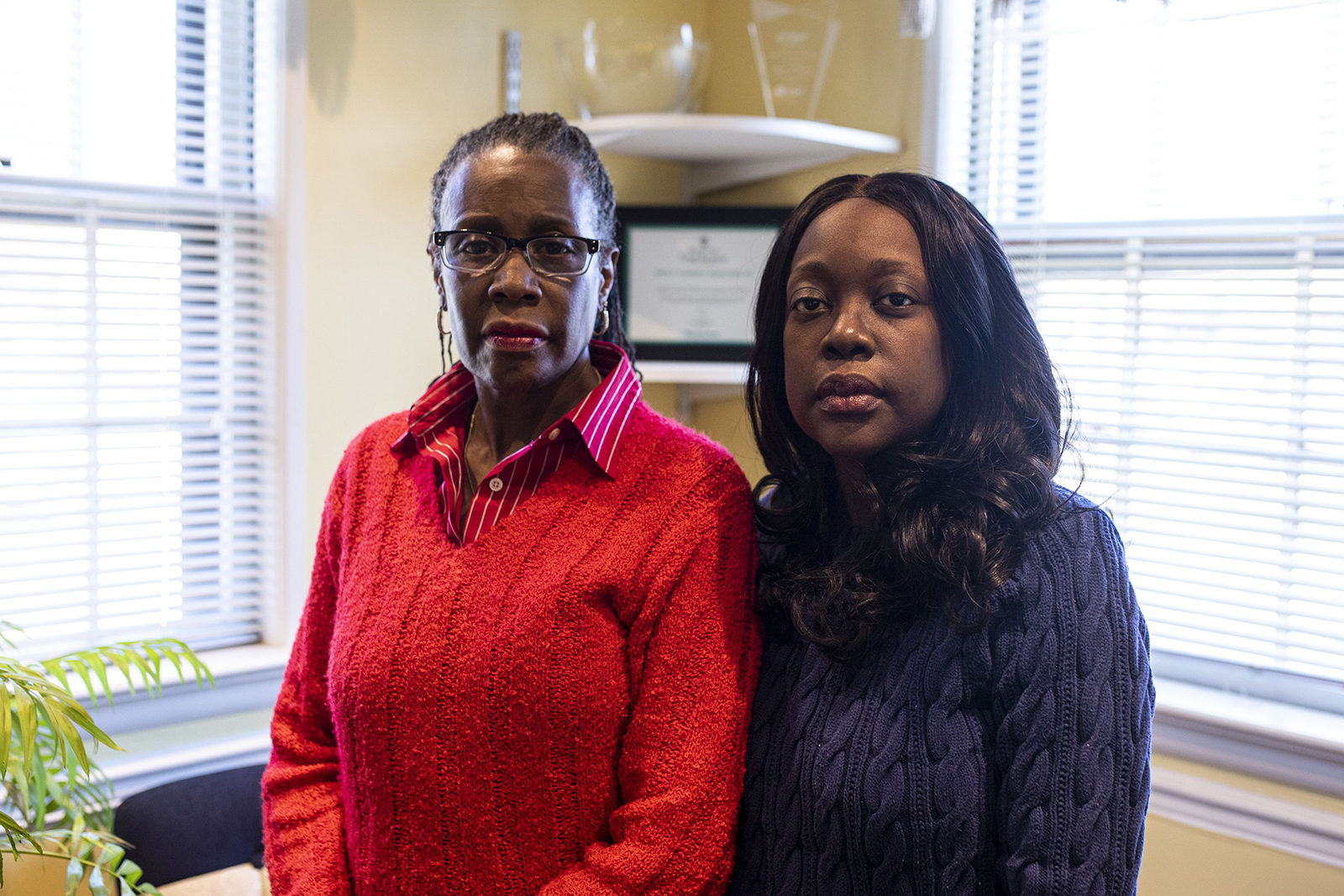 Anita T. Conner, 65, and her daughter, Kerri Conner Matchett, 47, both of Abington, were diagnosed with breast cancer 10 years apart. The mother-daughter team raise awareness about breast cancer and the importance of clinical trials through their nonprofit Praise Is the Cure. (Tyger Williams/The Philadelphia Inquirer/TNS)

Print Headline: How COVID is helping us move away from white-centered clinical trials to reach more patients