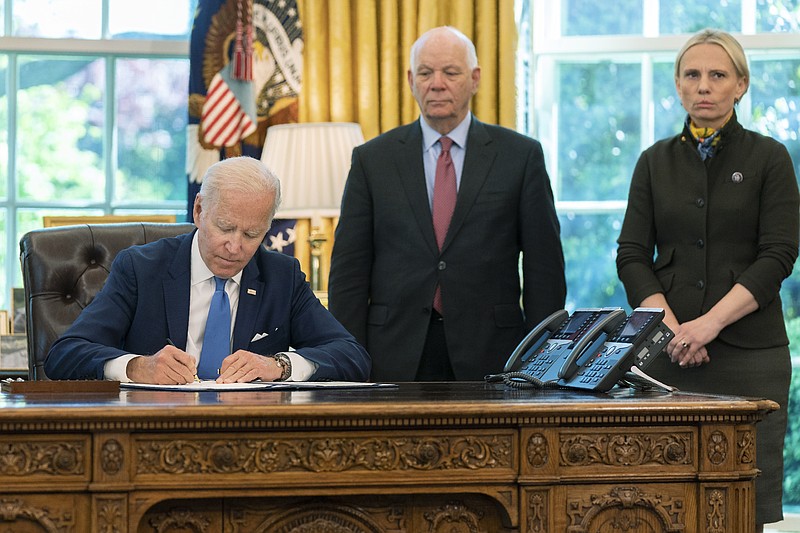 The new legislation is largely symbolic, but comes as Congress is poised to unleash more resources of $33 billion or more to fight the war. It all serves as a rejoinder to Russian President Vladimir Putin, who has seized on V-E day, the anniversary of Germany's unconditional surrender and Russia's biggest patriotic holiday, to rally his people behind the invasion.

Before signing the bill, Biden said "Putin's war" was "once more bringing wanton destruction of Europe," drawing reference to the significance of the day.

Flanked by two Democratic lawmakers and one Republican, Biden signed the bill, which had sailed through the Senate last month with unanimous agreement, not even the need for a formal roll call vote. It passed overwhelmingly in the House, drawing opposition from just 10 Republicans.

"It really matters," Biden said of the bipartisan support for Ukraine. "It matters."

Despite their differences over Biden's approach and perceived missteps in confronting Russia, when it comes to Ukraine the members of the House and Senate have held together in a rare bipartisan fashion. Other measures, including calls to investigate Putin for war crimes, have also gained widespread support.

"While President Putin and the Russian people celebrated Victory Day today, we're seeing Russian forces commit war crimes and atrocities in Ukraine, as they engage in a brutal war that is causing so much suffering and needless destruction," said White House press secretary Jen Psaki. She said Putin was "perverting" history to attempt to "justify his unprovoked and unjustified war."

Biden's latest request for $33 billion more in military and humanitarian aid will pull the U.S. deeper into the conflict, and test the resolve in Congress.

But as the package makes its way through the House and Senate, with votes possible soon, lawmakers are showing no signs of flinching. Countless lawmakers have made weekend excursions to the region to see first-hand the devastation of the war on Ukraine and surrounding countries, as more than 5 million refugees flee the region.

Rather than fight the spending overseas -- as had been an increasingly popular viewpoint during the Trump era -- some lawmakers in both parties want to boost the amount of U.S. aid being sent to Ukraine.

Congressional Democrats are preparing a plan that would boost the Ukraine aid package to nearly $40 billion, and a House vote was possible as soon as Tuesday, two people familiar with lawmakers' thinking said.