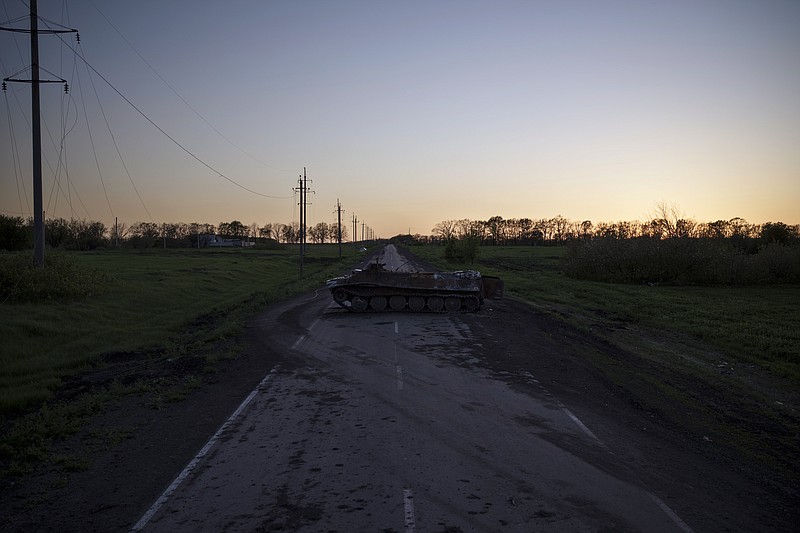 A destroyed Russian tank is seen as the sun sets in the village of Vilkhivka, recently retaken by Ukraininan forces near Kharkiv, Ukraine, Monday, May 9, 2022. (AP Photo/Felipe Dana)

ZAPORIZHZHIA, Ukraine (AP) -- Russian President Vladimir Putin marked his country's biggest patriotic holiday Monday without a major new battlefield success in Ukraine to boast of, as the war ground on through its 11th week with the Kremlin's forces making little or no progress in their offensive.

The Russian leader oversaw a Victory Day parade on Moscow's Red Square, watching as troops marched in formation and military hardware rolled past in a celebration of the Soviet Union's role in the 1945 defeat of Nazi Germany.

While Western analysts in recent weeks had widely expected Putin to use the holiday to trumpet some kind of victory in Ukraine or announce an escalation, he did neither. Instead, he sought to justify the war again as a necessary response to what he portrayed as a hostile Ukraine.

"The danger was rising by the day," Putin said. "Russia has given a preemptive response to aggression. It was forced, timely and the only correct decision."

He steered clear of battlefield specifics, failing to mention the potentially pivotal battle for the vital southern port of Mariupol and not even uttering the word "Ukraine."

On the ground, meanwhile, intense fighting raged in Ukraine's east, the vital Black Sea port of Odesa in the south came under repeated missile attack, and Russian forces sought to finish off the Ukrainian defenders making their last stand at a steel plant in Mariupol.

Putin has long bristled at NATO's creep eastward into former Soviet republics. Ukraine and its Western allies have denied the country posed any threat.

As he has done all along, Putin falsely portrayed the fighting as a battle against Nazism, thereby linking the war to what many Russians consider their finest hour: the triumph over Hitler. The Soviet Union lost 27 million people in what Russia refers to as the Great Patriotic War.

After unexpectedly fierce resistance forced the Kremlin to abandon its effort to storm Kyiv over a month ago, Moscow's forces have concentrated on capturing the Donbas, Ukraine's eastern industrial region.

But the fighting there has been a back-and-forth, village-by-village slog, and many analysts had suggested Putin might use his holiday speech to present the Russian people with a victory amid discontent over the country's heavy casualties and the punishing effects of Western sanctions.

Others suggested he might declare the fighting a war, not just a "special military operation," and order a nationwide mobilization, with a call-up of reserves, to replenish the depleted ranks for an extended conflict.

In the end, he gave no signal as to where the war is headed or how he might intend to salvage it. Specifically, he left unanswered the question of whether or how Russia will marshal more forces for a continuing war.

"Without concrete steps to build a new force, Russia can't fight a long war, and the clock starts ticking on the failure of their army in Ukraine," tweeted Phillips P. O'Brien, professor of strategic studies at the University of St. Andrews in Scotland.

Nigel Gould Davies, former British ambassador to Belarus, said: "Russia has not won this war. It's starting to lose it."

He said unless Russia has a major breakthrough, "the balance of advantages will shift steadily in favor of Ukraine, especially as Ukraine gets access to growing volumes of increasingly sophisticated Western military equipment."

Despite Russia's crackdown on dissent, antiwar sentiment has seeped through. Dozens of protesters were detained around the country on Victory Day, and editors at a pro-Kremlin media outlet revolted by briefly publishing a few dozen stories criticizing Putin and the invasion.

In Warsaw, antiwar protesters splattered Russia's ambassador to Poland with what appeared to be red paint as he arrived at a cemetery to pay respects to Red Army soldiers who died during World War II.

As Putin laid a wreath in Moscow, air raid sirens echoed again in the Ukrainian capital. But Ukrainian President Volodymyr Zelenskyy declared in his own Victory Day address that his country would eventually defeat the Russians.

"Very soon there will be two Victory Days in Ukraine," he said in a video. He added: "We are fighting for freedom, for our children, and therefore we will win."

Russia has about 97 battalion tactical groups in Ukraine, largely in the east and the south, a slight increase over last week, according to a senior U.S. official, speaking on condition of anonymity to discuss the Pentagon's assessment. Each unit has roughly 1,000 troops, according to the Pentagon.

The official said that overall, the Russian effort in the Donbas hasn't achieved any significant progress in recent days and continues to face stiff resistance from Ukrainian forces.

The Ukrainian military warned of a high probability of missile strikes around the holiday, and some cities imposed curfews or warned people not to gather in public places.

More than 60 people were feared dead over the weekend after Russian bombardment flattened a Ukrainian school being used as a shelter in the eastern village of Bilohorivka, Ukrainian officials said.

Russia is perhaps closest to a victory in Mariupol. The U.S. official said roughly 2,000 Russian forces were around Mariupol, and the city was being pounded by airstrikes. As many as 2,000 Ukrainian defenders were believed to be holding out at the steel plant, the city's last stronghold of resistance.

The fall of Mariupol would deprive Ukraine of a vital port, allow Russia to complete a land corridor to the Crimean Peninsula, and free up troops to fight elsewhere in the Donbas. It would also give the Kremlin a badly needed success.

Odesa, too, has increasingly been bombarded in recent days.

Ukrainian officials said it came under repeated fire from missiles Monday. There were no immediate reports of any casualties, and authorities did not say what was struck.

The war in the country long known as the "breadbasket of Europe" has disrupted global food supplies.

"I saw silos full of grain, wheat and corn ready for export," Charles Michel, president of the European Council, lamented in a tweet after a visit to Odesa. "This badly needed food is stranded because of the Russian war and blockade of Black sea ports. Causing dramatic consequences for vulnerable countries."

Gambrell reported from Lviv, Ukraine. Yesica Fisch in Bakhmut, David Keyton in Kyiv, Yuras Karmanau in Lviv, Mstyslav Chernov in Kharkiv, Lolita C. Baldor in Washington, and AP staff around the world contributed to this report.

Follow AP's coverage of the war in Ukraine: https://apnews.com/hub/russia-ukraine

The new legislation is largely symbolic, but comes as Congress is poised to unleash more resources of $33 billion or more to fight the war. It all serves as a rejoinder to Russian President Vladimir Putin, who has seized on V-E day, the anniversary of Germany's unconditional surrender and Russia's biggest patriotic holiday, to rally his people behind the invasion.

Before signing the bill, Biden said that "Putin's war" was "once more bringing wanton destruction of Europe," drawing reference to the significance of the day.

Flanked by two Democratic lawmakers and one Republican, Biden signed the bill, which had sailed through the Senate last month with unanimous agreement, not even the need for a formal roll call vote. It passed overwhelmingly in the House, drawing opposition from just 10 Republicans.

"It really matters," Biden said of the bipartisan support for Ukraine. "It matters."

Despite their differences over Biden's approach and perceived missteps in confronting Russia, when it comes to Ukraine the members of the House and Senate have held together in a rare bipartisan fashion Other measures, including calls to investigate Putin for war crimes, have also gained widespread support.

"While President Putin and the Russian people celebrated Victory Day today, we're seeing Russian forces commit war crimes and atrocities in Ukraine, as they engage in a brutal war that is causing so much suffering and needless destruction," said White House press secretary Jen Psaki. She said Putin was "perverting" history to attempt to "justify his unprovoked and unjustified war."

Biden's latest request for $33 billion more in military and humanitarian aid will pull the U.S. deeper into the conflict, and test the resolve in Congress.

But as the package makes its way through the House and Senate, with votes possible soon, lawmakers are showing no signs of flinching. Countless lawmakers have made weekend excursions to the region to see first-hand the devastation of the war on Ukraine and surrounding countries, as more than 5 million refugees flee the region.

Rather than fight the spending overseas -- as had been an increasingly popular viewpoint during the Trump era -- some lawmakers in both parties want to boost the amount of U.S. aid being sent to Ukraine.

Congressional Democrats are preparing a plan that would boost the Ukraine aid package to nearly $40 billion, and a House vote was possible as soon as Tuesday, two people familiar with lawmakers' thinking said. 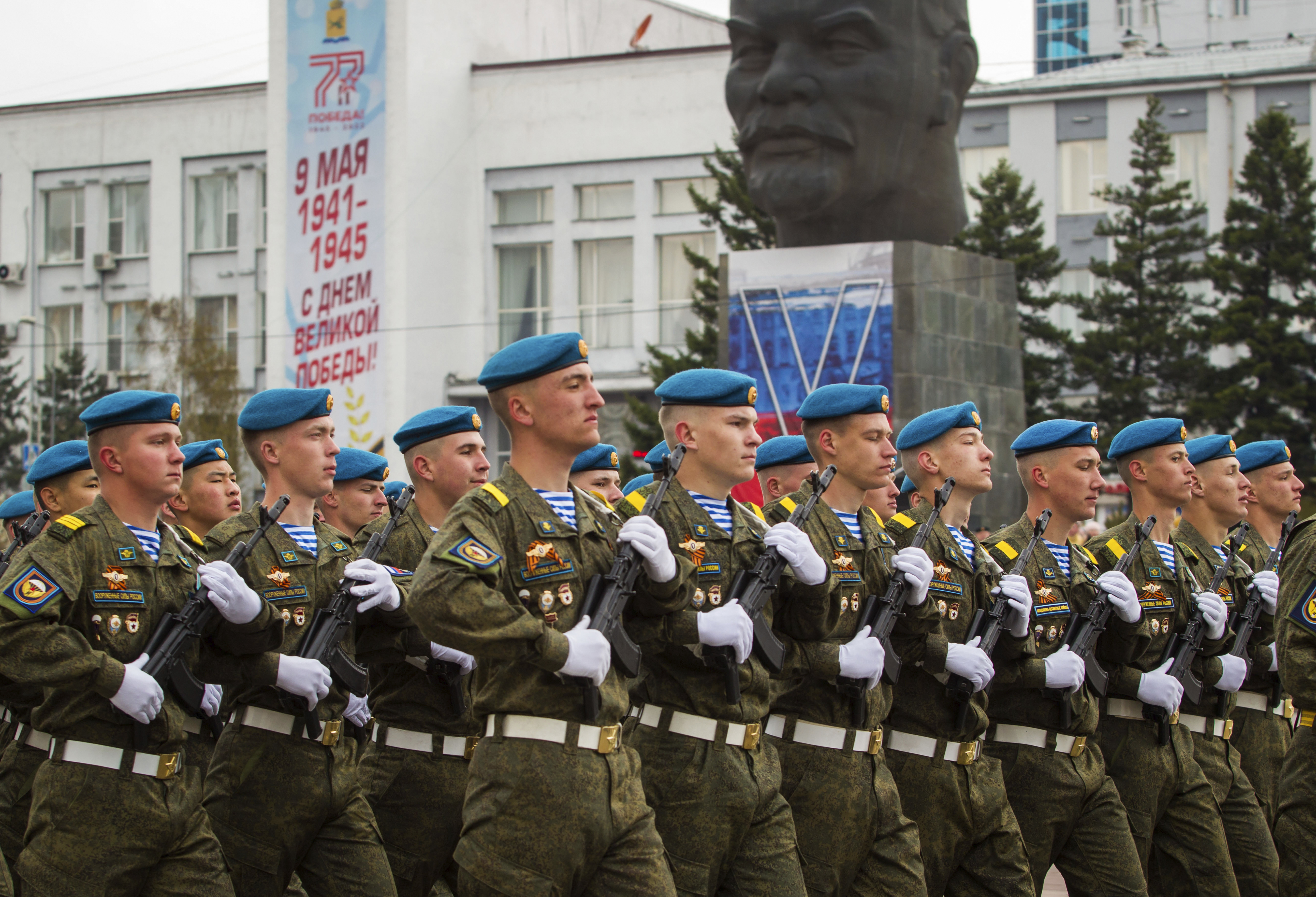 Russian servicemen march during the Victory Day military parade in Ulan-Ude, the regional capital of Buryatia, a region near the Russia-Mongolia border, Russia, Monday, May 9, 2022, marking the 77th anniversary of the end of World War II. (AP Photo) 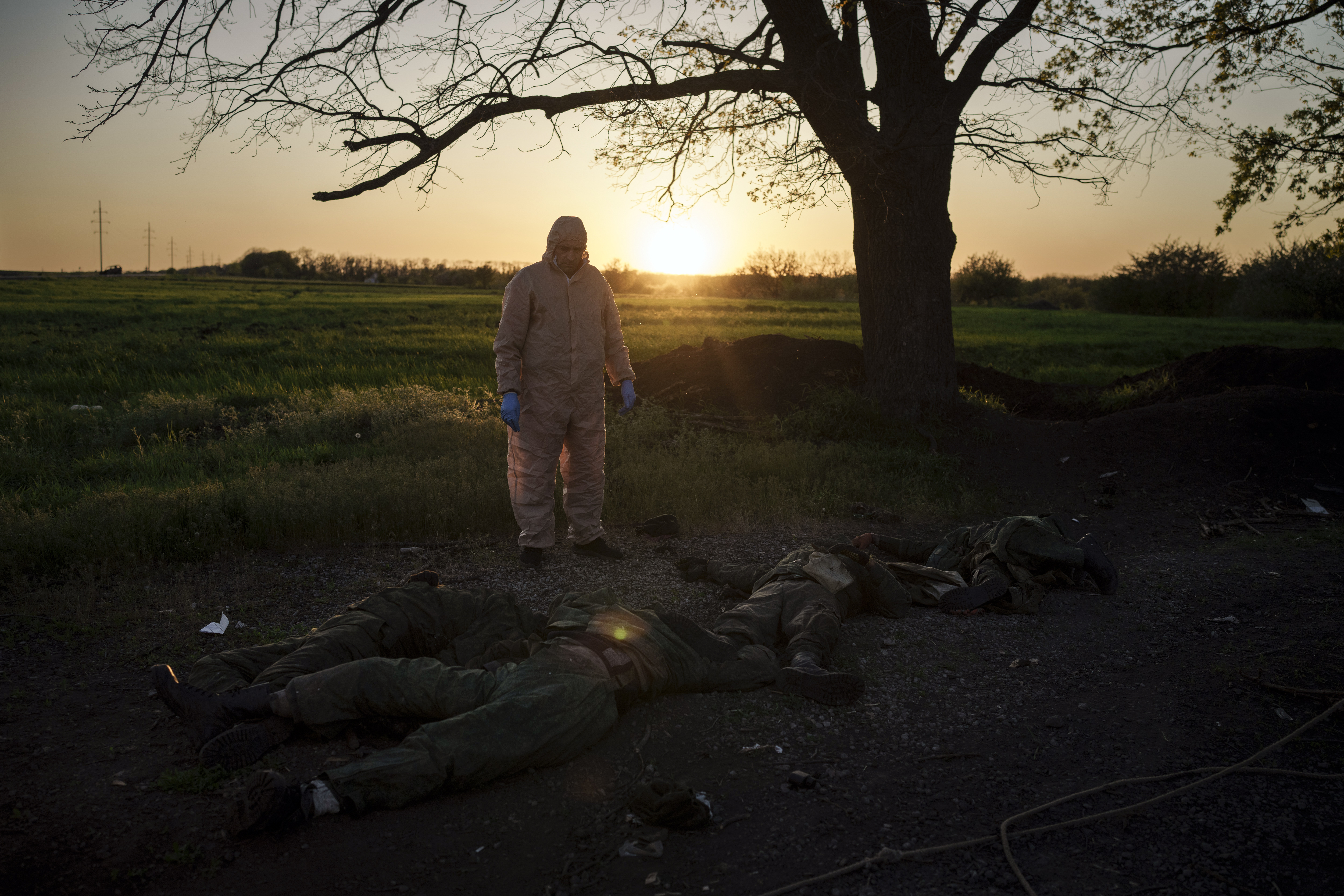 A Ukrainian emergency worker stands next to the bodies of Russian soldiers in the village of Vilkhivka, recently retaken by Ukrainian forces near Kharkiv, Ukraine, Monday, May 9, 2022. (AP Photo/Felipe Dana) 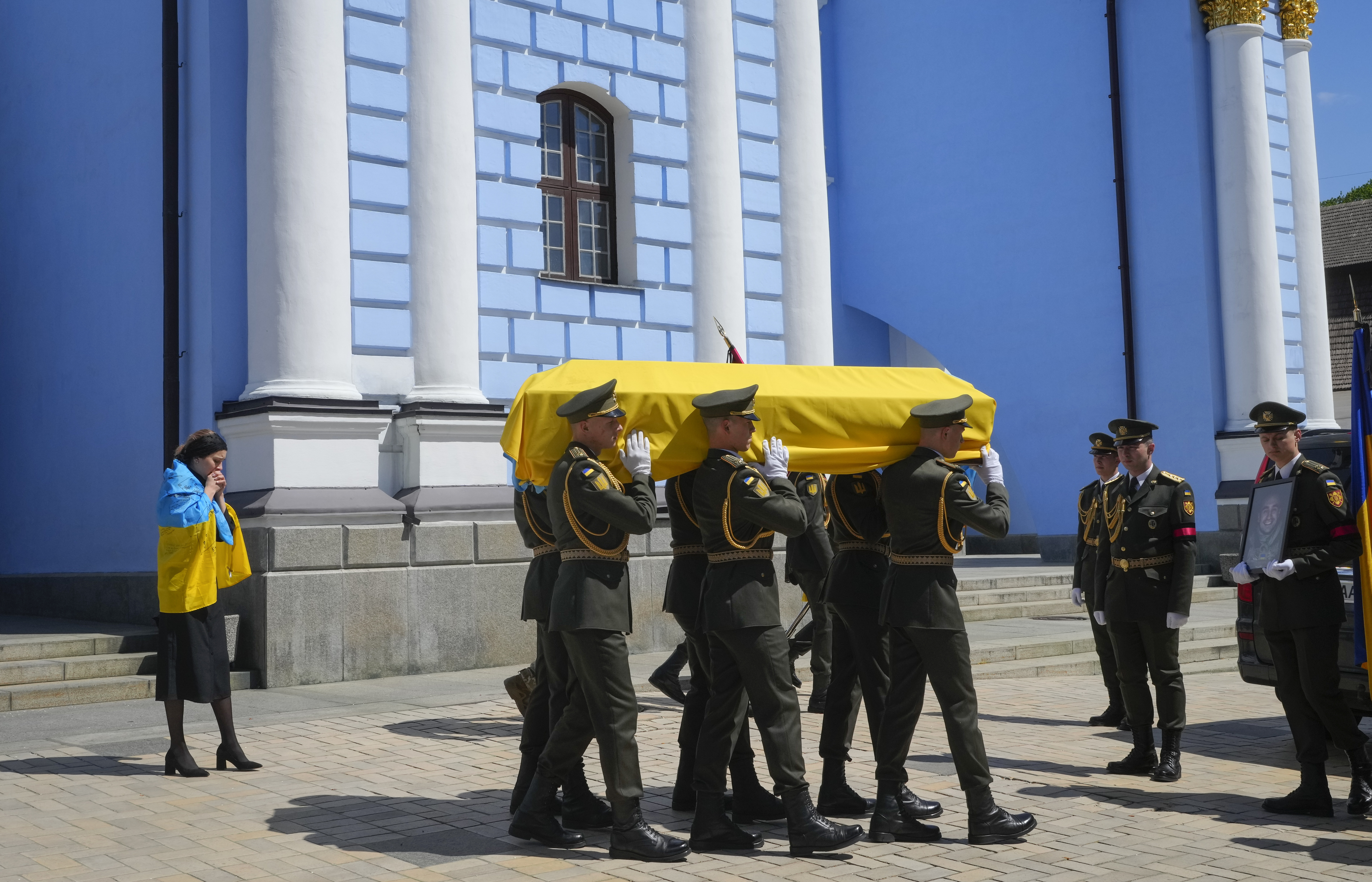 Soldiers carry a coffin with remains of a volunteer soldier Oleksandr Makhov, a well-known Ukrainian journalist, killed by the Russian troops, at St Michael cathedral in Kyiv, Ukraine, Monday, May 9, 2022. The coffin is followed by Makhov's widow.(AP Photo/Efrem Lukatsky) 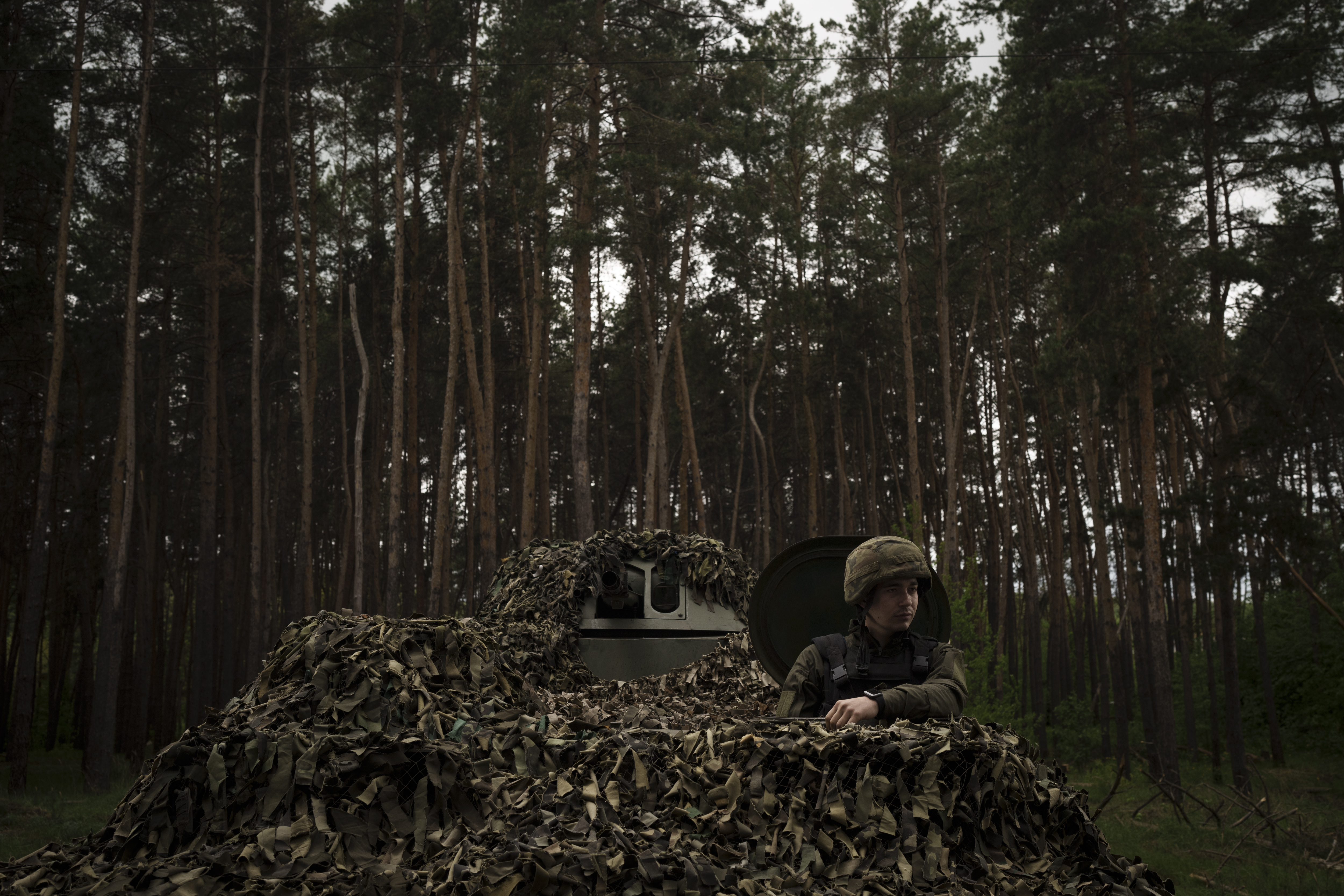 A Ukrainian National Guard soldier sits inside a tank at a position near Kharkiv, Ukraine, Monday, May 9, 2022. (AP Photo/Felipe Dana) 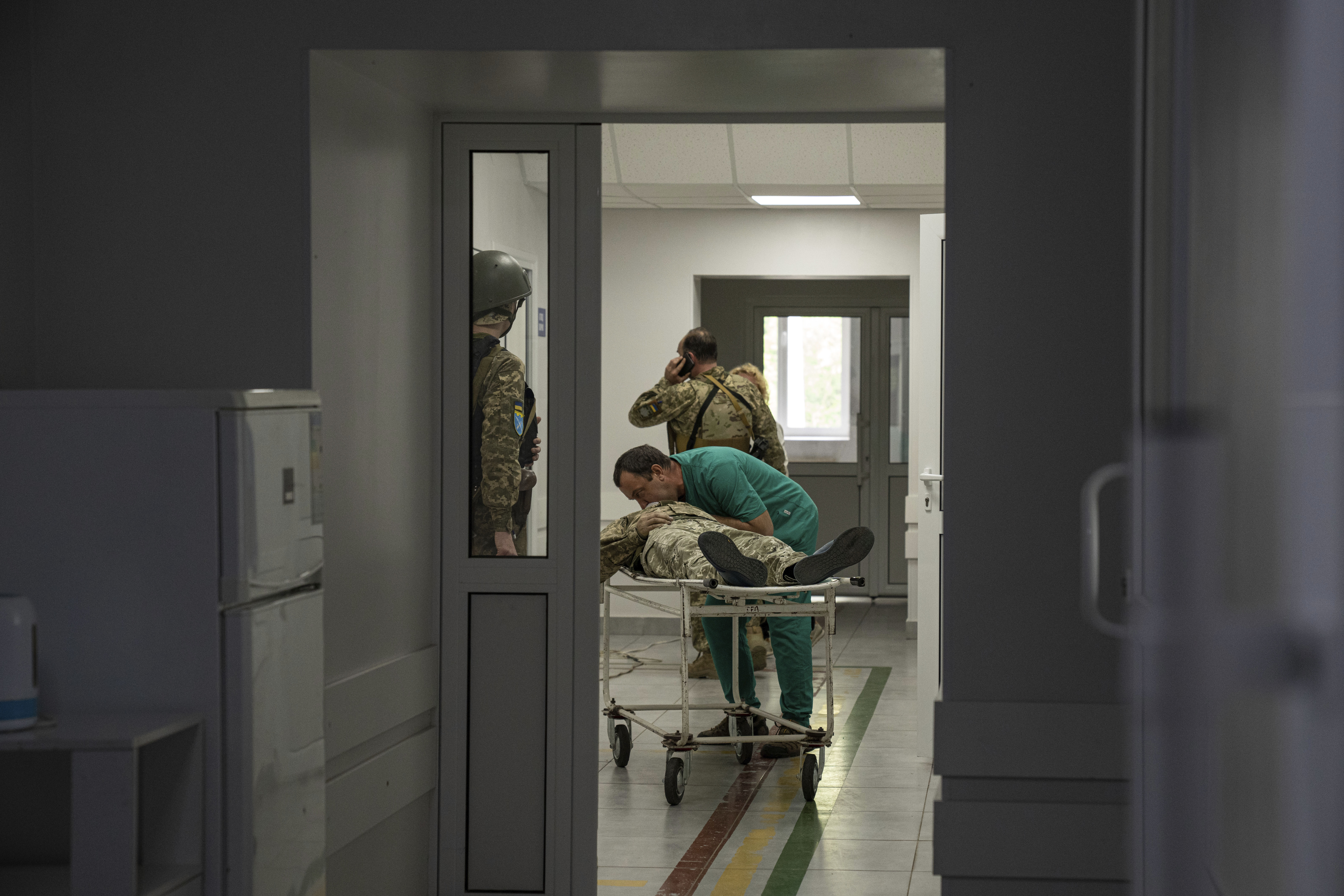 A doctor treats a Ukrainian serviceman injured inside the hospital after an attack by Russian forces in the Donetsk region, Ukraine, on Monday, May 9, 2022.(AP Photo/Evgeniy Maloletka) 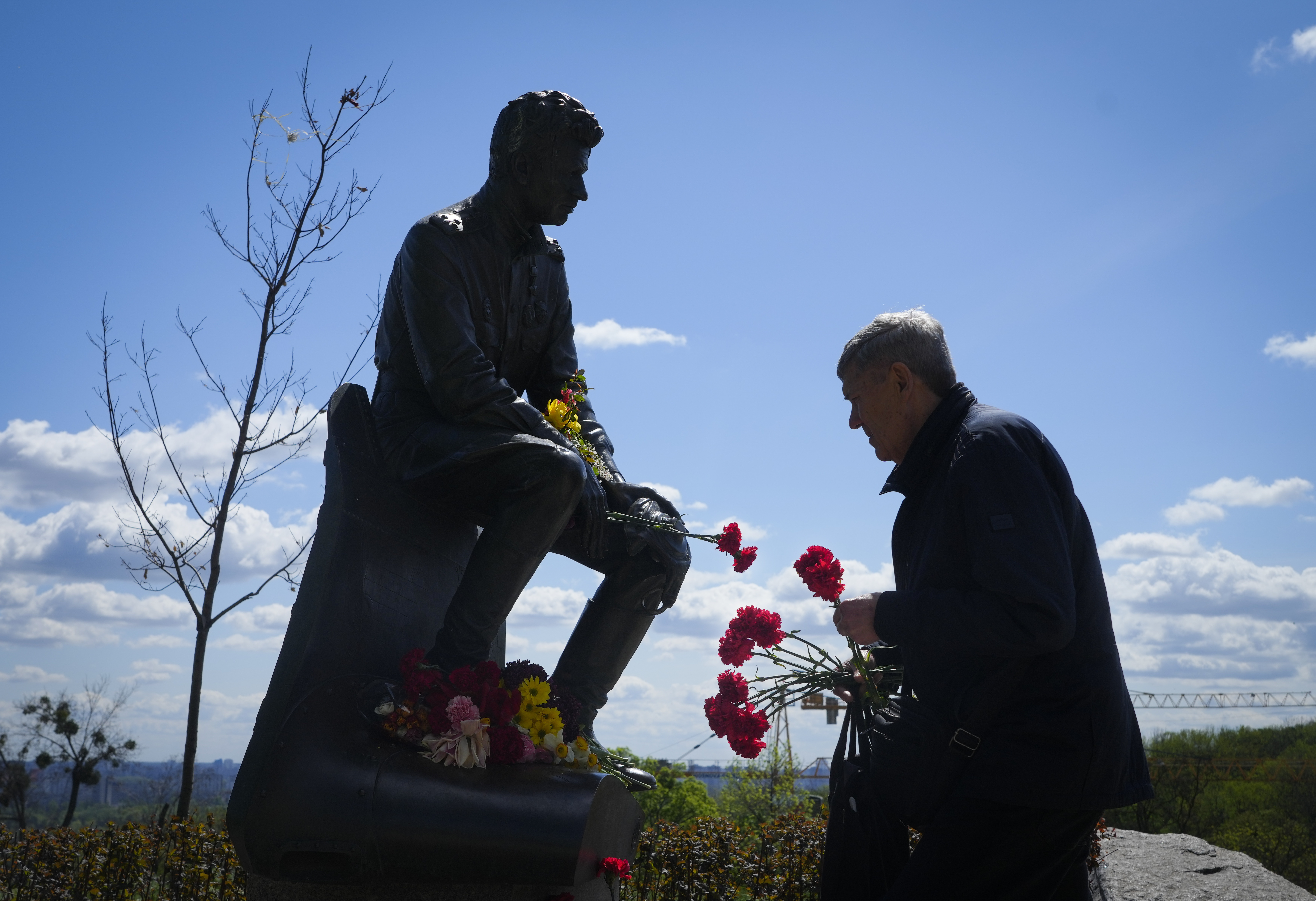 A man lays flowers at an Unknown Soldier Tomb to mark Victory Day in World War II, in Kyiv, Ukraine, Monday, May 9, 2022, as the Russian attack on Ukraine continues. (AP Photo/Efrem Lukatsky) 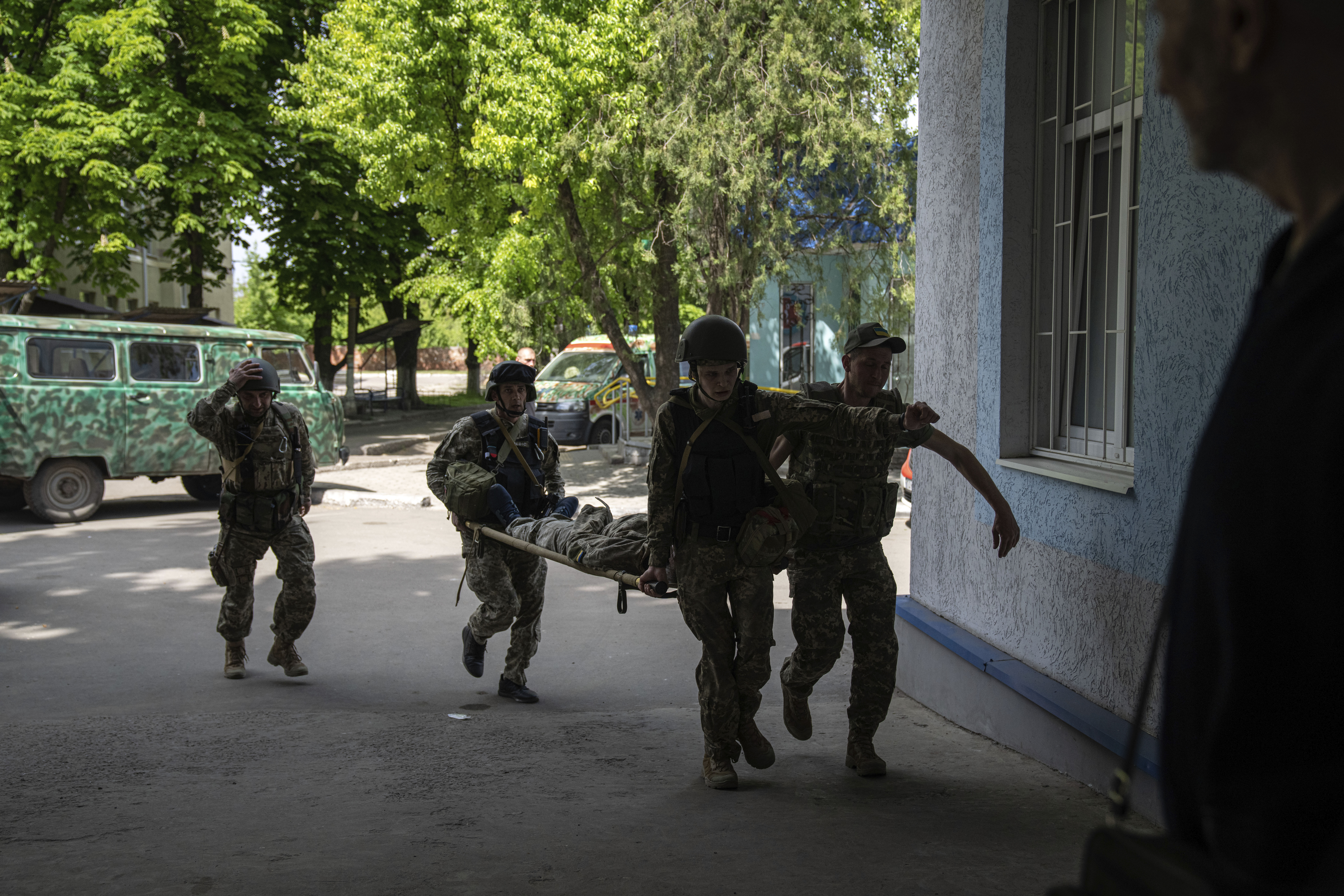 Ukrainian servicemen carry an injured comrade on A stretcher to the hospital after an attack by Russian forces in Donetsk region, Ukraine, on Monday, May 9, 2022.(AP Photo/Evgeniy Maloletka) 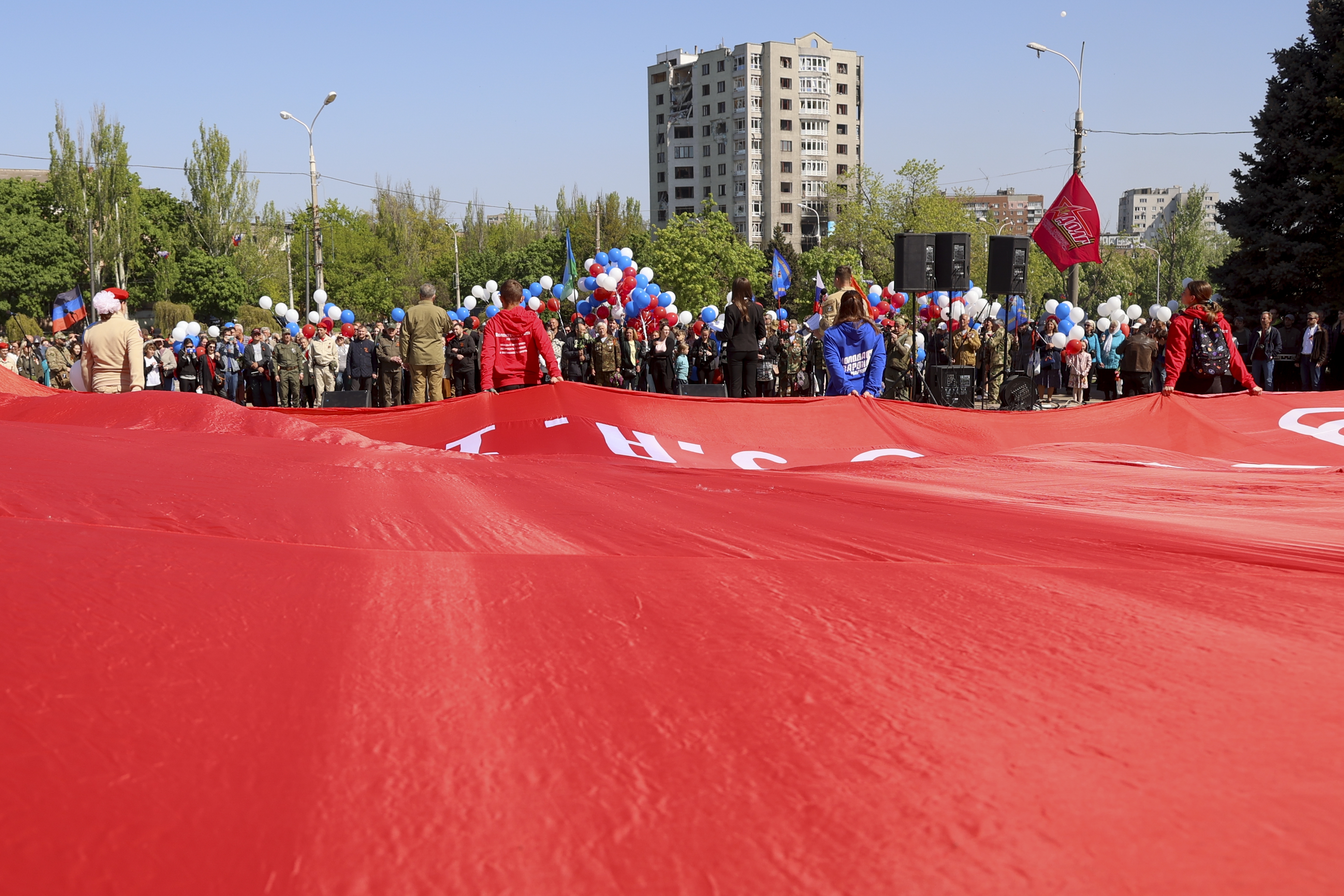 People carry a big replica of the Victory banner marking the 77th anniversary of the end of World War II in Mariupol, in territory under the government of the Donetsk People's Republic, eastern Ukraine, Monday, May 9, 2022. (AP Photo/Alexei Alexandrov) 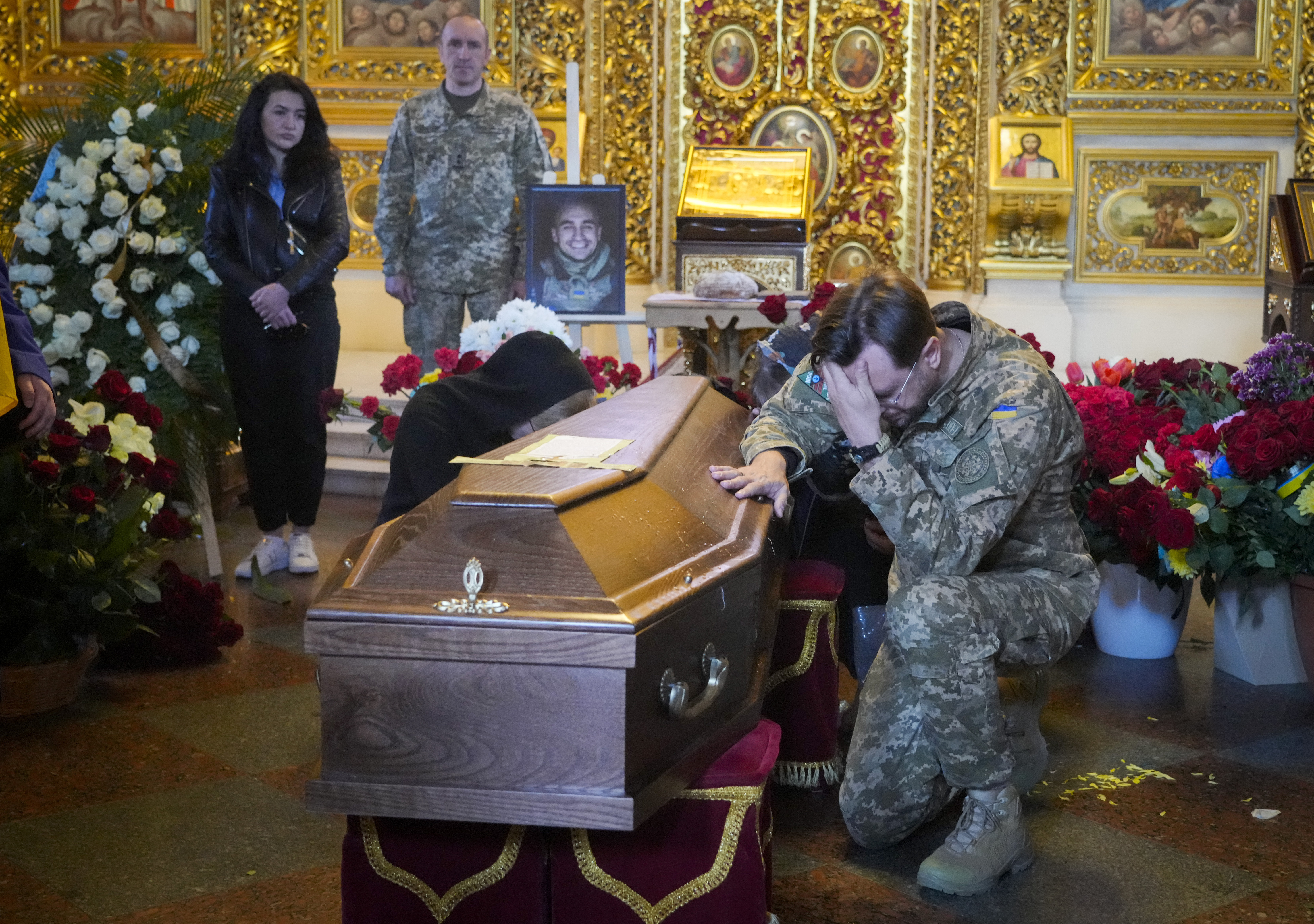