After medical bills broke the bank, this family went to Mexico for care 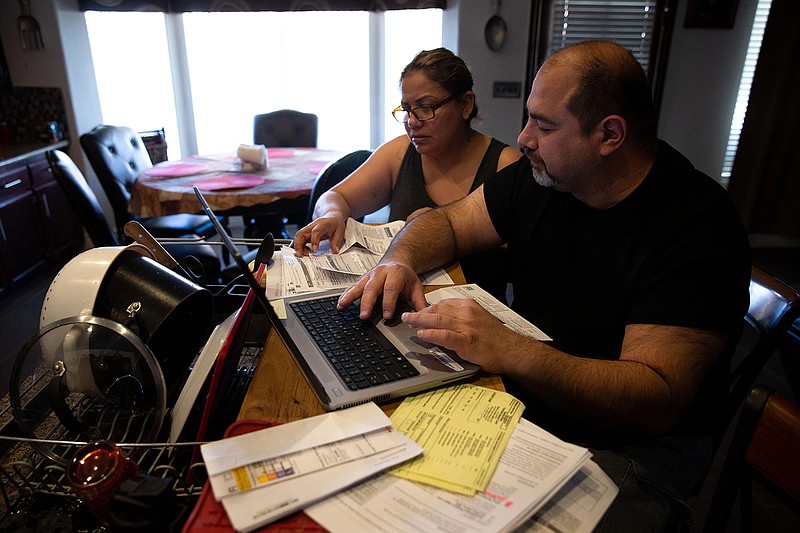 Jesús and Claudia review their high medical bills. They report paying $1,000 a month for health insurance premiums yet still owed more than $7,000 in deductibles and coinsurance after two episodes of care at the local hospital. (Lisa Hornak/KHN/TNS)

The Fierro family of Yuma, Arizona, had a string of bad medical luck that started in December 2020.

That's when Jesús Fierro Sr. was admitted to the hospital with a serious COVID-19 infection. He spent 18 days at Yuma Regional Medical Center, where he lost 60 pounds. He came home weak and dependent on an oxygen tank.

Then, in June 2021, his wife, Claudia, fainted while waiting for a table at the local Olive Garden. She felt dizzy one minute and was in an ambulance on her way to the same medical center the next. She was told her magnesium levels were low and was sent home within 24 hours.

The family has health insurance through Jesús Sr.'s job. But it didn't protect the Fierros from owing thousands of dollars. So, when their son Jesús Fierro Jr. dislocated his shoulder, the Fierros -- who hadn't yet paid the bills for their own care -- opted out of U.S. health care and headed south to the U.S.-Mexico border.

And no other bills came for at least one member of the family.

Medical Services: For Jesús Sr., 18 days of inpatient care for a severe COVID infection. For Claudia, less than 24 hours of emergency care after fainting. For Jesús Jr., a walk-in appointment for a dislocated shoulder.

Service Providers: Yuma Regional Medical Center, a 406-bed, nonprofit hospital in Yuma, Arizona. It's in the Fierros' insurance network. And a private doctor's office in Mexicali, Mexico, which is not.

What Gives: The Fierros were trapped in a situation that more and more Americans find themselves in: They are what some experts term "functionally uninsured." They have insurance -- in this case, through Jesús Sr.'s job, which pays $72,000 a year. But their health plan is expensive, and they don't have the liquid savings to pay their "share" of the bill. The Fierros' plan says their out-of-pocket maximum is $8,500 a year for the family. And in a country where even a short stay in an emergency room is billed at a staggering sum, that means minor encounters with the medical system can take virtually all of the family's disposable savings, year after year. And that's why the Fierros opted out.

The Fierros are paying off that bill -- $140 a month -- and still owe more than $2,500. In 2020, most insurers agreed to waive cost-sharing payments for COVID-19 treatment after the passage of federal COVID-19 relief packages that provided emergency funding to hospitals. But waiving treatment costs was optional under the law. And although Blue Cross Blue Shield of Texas has a posted policy saying it would waive cost sharing through the end of 2020, the insurer didn't do that for Jesús Sr.'s bill. Carrie Kraft, a spokesperson for the insurer, wouldn't discuss why his COVID bill was not waived.

(More than two years into the pandemic and with vaccines now widely available to reduce the risk of hospitalization and death, most insurers again charge patients their cost sharing.)

On Jan. 1, 2021, the Fierros' deductible and out-of-pocket maximum reset. So when Claudia fainted -- a fairly common occurrence and rarely indicative of a serious problem -- she was sent by ambulance to the emergency room, leaving the Fierros with another bill of more than $3,000. That kind of bill is a huge stress on the average American family; fewer than half of U.S. adults have enough savings to cover a surprise $1,000 expense. In recent polling by KFF, "unexpected medical bills" ranked second among family budget worries, behind gas prices and other transportation costs.

The new bill for a fainting spell destabilized the Fierros' household budget. "We thought about taking a second loan on our house," said Jesús Sr., a Los Angeles native. When he called the hospital to ask for financial assistance, he said, people he spoke with strongly discouraged him from applying. "They told me that I could apply but that it would only lower Claudia's bill by $100," he said.

So when Jesús Jr. dislocated his shoulder boxing with his brother, the family headed south.

Jesús Sr. asked his son, "Can you bear the pain for an hour?" The teen replied, "Yes."

The Fierros don't consider themselves "health tourists." Jesús Sr. crosses the border into Mexicali every day for his work, and Mexicali is Claudia's hometown. They've been traveling to the neighborhood known as La Chinesca ("Chinatown") for years to see Acosta, a general practitioner, who treats the asthma of their youngest son, Fernando, 15. Treatment for Jesús Jr.'s dislocated shoulder was the first time they had sought emergency care from the physician. The price was right, and the treatment effective.

A visit to a U.S. emergency room likely would have involved a facility fee, expensive X-rays, and perhaps an orthopedic specialist's evaluation -- which would have generated thousands of dollars in bills. Acosta adjusted Jesús Jr.'s shoulder so the bones aligned in the socket and prescribed him ibuprofen for soreness. The family paid cash on the spot.

Although the Centers for Disease Control and Prevention doesn't endorse traveling to another country for medical care, the Fierros are among millions of Americans each year who do so. Many of them are fleeing expensive care in the U.S., even with health insurance.

Acosta, who is from the Mexican state of Sinaloa and is a graduate of the Autonomous University of Sinaloa, moved to Mexicali 20 years ago. He witnessed firsthand the growth of the medical tourism industry.

He sees about 14 patients a day (no appointment necessary), and 30-40 percent of those are from the U.S. He charges $8 for typical visits.

In Mexicali, a mile from La Chinesca, where the family doctors have their modest offices, are medical facilities that rival those in the United States. The facilities have international certification and are considered expensive, but they are still cheaper than U.S. hospitals.

Resolution: Both Blue Cross Blue Shield of Texas and Yuma Regional Medical Center declined to discuss the Fierros' bills with KHN, even though Jesús Sr. and Claudia gave written permission for them to do so.

In a statement, Yuma Regional Medical Center spokesperson Machele Headington said, "Applying for financial support starts with an application -- a service we extended, and still extend, to these patients."

In an email, Kraft, the Blue Cross Blue Shield of Texas spokesperson, said: "We understand the frustration our members experience when they receive a bill containing COVID-19 charges that they do not understand, or feel may be inappropriate."

The Fierros are planning to apply to the hospital for financial support for their outstanding debts. But Claudia said never again. "I told Jesús, 'If I faint again, please drive me home,'" rather than calling an ambulance, she said.

"We pay $1,000 premium monthly for our employment-based insurance," Jesús added. "We should not have to live with this stress."

The Takeaway: Be aware your deductible "meter" starts over every year and virtually any emergency care can generate a bill in the thousands of dollars and may leave you owing most of your deductible and out-of-pocket maximum.

Also be aware even if you seem not to qualify for financial assistance based on a hospital's policy, you can apply and explain your circumstances. Because of the high cost of care in the U.S., even many middle-income people qualify. And many hospitals give their finance departments leeway to adjust bills. Some patients discover if they offer to pay cash on the spot, the bill can be reduced dramatically.

All nonprofit hospitals have a legal obligation to help patients: They pay no tax in exchange for providing "community benefit." Make a case for yourself, and ask for a supervisor if you get an initial "no."

For elective procedures, patients can follow the Fierros' example, becoming savvy health care shoppers. Recently, Claudia needed an endoscopy to evaluate an ulcer. The family has been calling different facilities and discovered a $500 difference in the cost of an endoscopy. They will soon drive to a medical center in Central Valley, California, two hours from home, for the procedure.

The Fierros didn't even consider going back to their local hospital. "I don't want to say 'hello' and receive a $3,000 bill," Jesús Sr. joked. 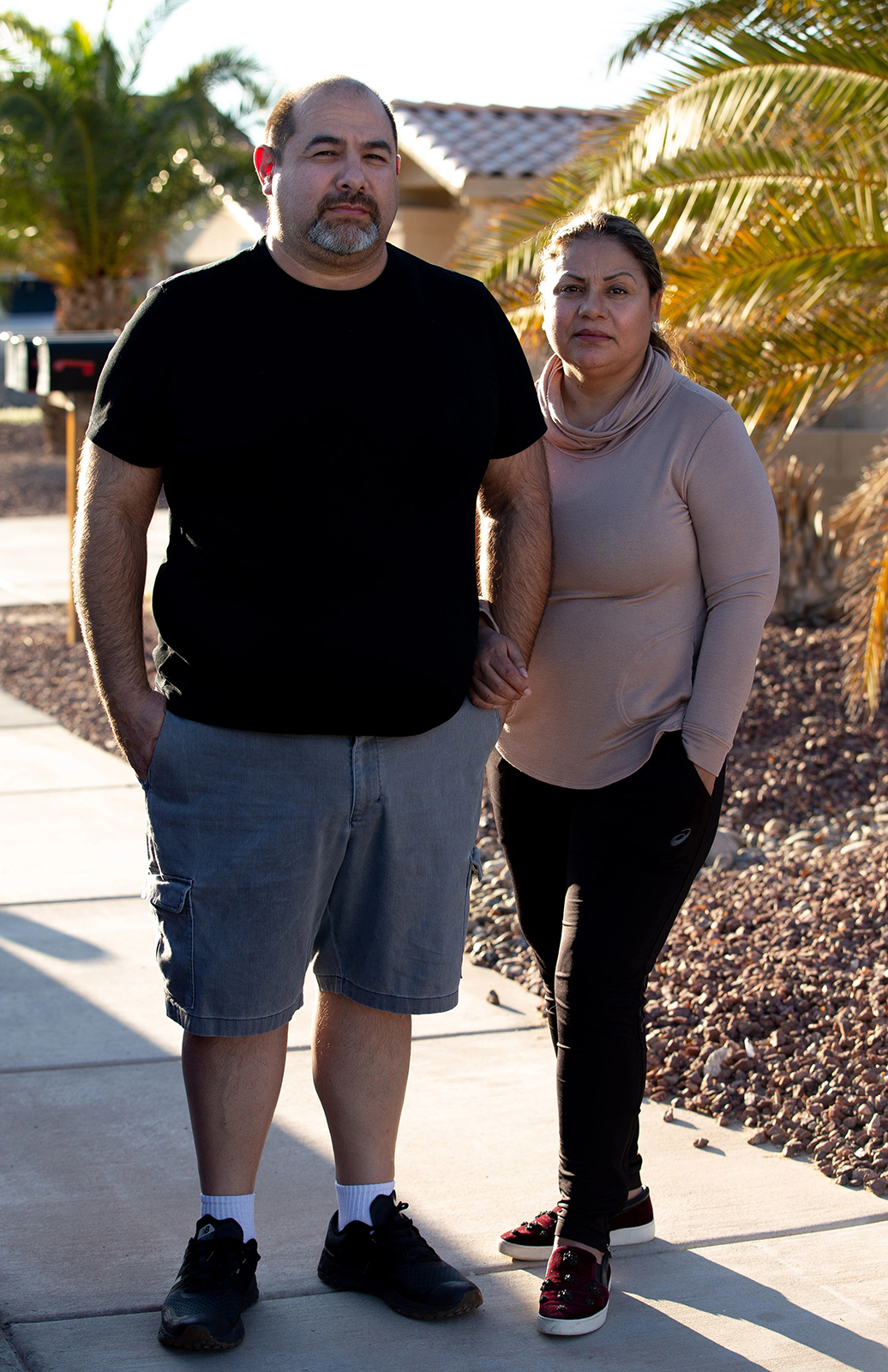 The Fierros have been strapped by unusually high medical bills from the Yuma Regional Medical Center. (Lisa Hornak/KHN/TNS)

Print Headline: After medical bills broke the bank, this family went to Mexico for care