A chasm in Missouri’s GOP has grown during session 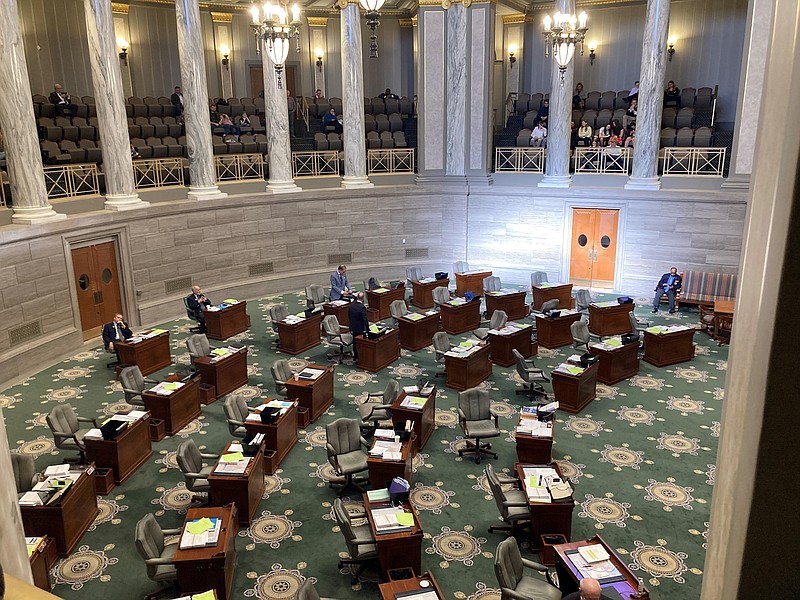 Republican state Sens. Bob Onder and Rick Brattin stand in a virtually empty Missouri Senate chamber to filibuster against a congressional redistricting plan on Wednesday, Feb. 9, 2022 in Jefferson City, Mo. Onder and Brattin oppose a plan that's projected to continue the state's current representation of six Republicans and two Democrats in the U.S. House. They prefer a map that would give Republicans a better shot at winning seven seats. (AP Photo/David A. Lieb)

Senate Majority Leader Caleb Rowden stood in his office on the third floor of the Missouri Capitol hoping the remainder of the legislative session would involve more cooperation than the first month had.

The sound echoing from two floors below suggested the Columbia Republican had his work cut out for him.

Downstairs, in the Capitol Rotunda, conservative senators were riling up anti- abortion protesters, who were adamant that the Senate draw congressional districts to ensure an additional Republican would be sent to Washington.

"In just this past week," announced Sen. Bill Eigel, R-Weldon Spring, to the fervent crowd, "myself, along with some of the other senators you've met today, have filibustered the Senate floor for over 50 hours."

Cheers and a standing ovation ensued.

That was in mid-February. Now, with less than a week left in the session, intra-party tension has not dissipated as Rowden would have liked, though some collaboration has shone through on budget and education efforts.

Filibustering, dress code violations and general disruption in the Senate resulted in a historically unproductive start to this year's legislative session. The body failed to pass any legislation until the last week of February.

During this session, Moon, Eigel and Onder have largely taken the lead in the caucus' obstinacy, and the group still has time to kill legislation in the final days of session.

Lawmakers on both sides of the debate admit that the ongoing contention has hurt the very people they've sworn to represent. Bills of direct relevance to Missouri residents stood at a standstill as senators bickered over redistricting and other issues.

"There's no question," Onder said more than a month after lawmakers returned to work. "It's been an epically unproductive session."

And while the two sides have agreed on little lately, Rowden is on the same page as Onder on at least one point: A dysfunctional Senate is not good for Missourians.

"At some point, you've got to govern," Rowden said amid the Senate's redistricting deadlock. "You've got to do what the people sent you here to do, and I don't think we're doing that right now."

Marijuana legalization, for example, which has proven popular in the state, still hasn't crossed the legislative finish line.

But the caucus has pointed a finger at Senate leadership, including Senate President Pro Tem Dave Schatz, R-Sullivan, and Rowden himself, for steamrolling the caucus and creating the tension at hand.

While the senators that make up the conservative caucus generally share values, they come to Jefferson City from many corners of the state, and their experience and occupations outside of politics vary widely.

Moon, for example, is a cattle farmer in southwest Missouri with some marketing experience at the local hospital system.

Onder is a physician in St. Charles County specializing in allergy and immunology as well as internal medicine.

Despite these biographical and geographical differences, the group's interests manage to align. The caucus, formed in 2018, has consistently focused energy on hot-button conservative stances, including banning abortion and critical race theory as well as placing heavier restrictions on immigration, voting and social welfare services.

The caucus' uncompromising position on those issues has occasionally inflamed relations with other members of the Missouri GOP. Most recently, the caucus lashed out at eight Republicans for voting to approve a bill that would expand the state's Supplemental Nutrition Assistance Program, commonly known as food stamps, to include hot meals at restaurants.

As senators bicker, a docket full of legislation has remained in a holding pattern.

In March, a discussion on legislation to protect sexual assault survivors, proposed by Sen. Holly Rehder, R-Sikeston, was disrupted when Brattin intervened with an amendment relating to obscene material in schools.

"This has become our norm in the Missouri Senate," Rehder wrote in a legislative column. "We have sat by helpless as bipartisan legislation like this bill ... has been hijacked and purposefully tanked by a select few."

The bill eventually advanced with Brattin's amendment and is awaiting a conference between the two chambers.

Caucus members' history of seizing the spotlight, often by extreme measures, long predates this legislative session. In a graphic Facebook video from 2017, Moon, then in the House, beheaded a chicken as he described his anti-abortion position.

The chicken, as food, represented one way to sustain life, and Moon's bill to end abortion in Missouri represented another, the lawmaker argued.

"I think we need to get to the heart of the matter here," he said in the video, as he pulled the heart out of the headless bird.

Rehder is not the only Republican who has called out the group, which she once labeled the "four angry men's caucus," for grandstanding.

When Gov. Mike Parson sought the Senate's confirmation for Donald Kauerauf, his pick for health director, the caucus dominated the proceedings and ultimately killed the nomination. Moon held the floor for hours with concerns Kauerauf's self-proclaimed anti-abortion and anti-mandate stances, including vaccine mandates, were ingenuine.

Following the failed confirmation, Parson put out a statement condemning the senators who'd opposed it and said they were mistaking "what it means to be conservative."

"It's unfortunate that we now have to disrupt state operations and the leadership at an entire department because the Missouri Senate chose to indulge a few men's egos," Parson said.

Political donors picked up on this session's Senate dysfunction early.

A new political action committee, named RightPath, was created about three weeks into the legislative session, according to a statement filed Jan. 26 with the Missouri Ethics commission.

In the PAC's quarterly report filed April 2, it had raised more than $2.4 million. About $2 million of that was raised in the first three weeks of the PAC's existence.

Though a strategy for spending that money remains unclear, the PAC was formed out of frustrations with the Senate's impotence, according to previous Missourian reporting.

Alignment with the former president

A significant component of the caucus' identity falls under the brand of conservatism upheld by former President Donald Trump, and many of the caucus' members use language mirroring Trump's in their campaigns.

Visitors to the websites of Onder or Eigel are greeted with "Make Missouri Great Again" in bold type. Burlison uses his website to tout his record of "backing President Trump's agenda." On his campaign site, Moon promises to "finish Trump's border wall" if elected to Congress.

The goals of the caucus also closely align with the former president's agenda.

And, at the base of it all: "Judeo-Christian values."

The phrase made the rounds during the Cold War era as a method of uniting Americans against communist and atheist ideology.

Trump's campaigns have referred to Judeo-Christian values as a crucial, yet endangered, piece of the country's founding.

In Missouri's 2022 election cycle, however, those values also serve as a bridge between the state's political candidates and the popular Trump image in a vie for votes.

A few of the Senate conservative caucus members are seeking new positions in the coming election.

Moon and Burlison are competing for a seat in the state's 7th Congressional District, giving Burlison reason not to support his fellow caucus member's legislative efforts as this session wraps up.

Moon's bill to ban transgender student athletes from participating on the team of their gender identity, for example, was held up earlier this month when not enough senators were present.

Brattin is running for U.S. Rep. Vicky Hartzler's seat in the 4th Congressional District, which, after redistricting is settled, will likely include some or all of Boone County.

The caucus is also hoping to expand its membership as additional conservatives run for office. Forty-one Republicans filed to run for state Senate in the coming election, and 14 of the 17 seats opening up this year are currently Republican-held.

Onder is reaching his term limit this year and is running for St. Charles County executive.

A lack of numbers has posed a challenge to the caucus' objectives this session.

Recently, in the debate about the state's food assistance program, earlier in the session over redistricting, and everywhere in between, the caucus has condemned Republicans who have cast the same vote as the body's Democrats.

The current session ends Friday. Lawmakers have been focusing on breaking the redistricting deadlock before the courts take over the process, as well as other big-ticket issues such as voting requirements.

But the caucus still has time to impede these efforts.

"I would hope they kind of re-evaluate their motives," Rowden said, "and just want to be a contributing part of the team."

Print Headline: A chasm in Missouri’s GOP has grown during session