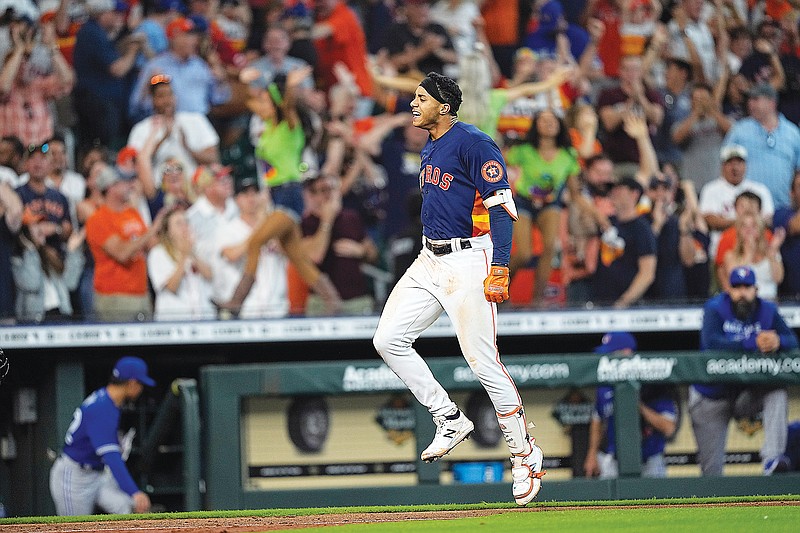 In this April 24 file photo, Jeremy Pena of the Astros celebrates after hitting a game-winning two-run home run against the Blue Jays in Houston. The Astros won 8-7 in 10 innings. (Associated Press)

Well, annoyingly, here we are again. It’s time to start talking about the composition of the baseball used in MLB games.

The conversation has happened over and over again the past few years, largely starting with the “rabbit ball” that jumped off the bat in 2019 and led to a league record of 6,776 home runs, beating the old record by more than 650 and soaring past any year in the steroid era.

Home runs accounted for more than 15 percent of all hits in 2019. There are a lot of reasons for that, but mostly it was a combination of the ball and players focusing on hitting the ball harder in the air to emphasize extra base hits.

There were hardly enough at-bats in the shortened 2020 season to really get a feel for any long-term trends, but MLB admitted it wanted to deaden the ball for fewer home runs in 2021, though it was accused of mixing in the 2019 ball in key nationally televised games such as the Field of Dreams Game for more excitement.

This season, it’s impossible to not see the difference.

“Well, it’s only the start of May, it’s probably just the weather.”

Sure, it’s been uncharacteristically cold for many games -- and MLB refuses to learn the lesson that teams in the upper Midwest and east coast who don’t have roofs shouldn’t have a ton of home games in April -- but baseball statistics have become advanced enough that we can break down different conditions.

We know exactly how hard the ball is coming off the bat and at exactly what angle.

And we know this year a ball hit at exactly the same speed and angle off the bat isn’t traveling as far as it did even last year, let alone in 2019.

Now, I understand the inclination to want to disincentive home runs compared to 2019, that was a lot, and some believe it’s the best way to get back to more action in a baseball game if you force batters to try to put the ball in play more instead of swinging for the fences.

The problem is, pitching is just too good now.

Pitchers are throwing harder on average than ever before with harder breaking pitches that move farther from start to finish. It’s become almost impossible to string together four, five or six hits in an inning to create a couple of runs. To expect to do that in multiple innings when your batters will be facing a new pitcher with a different arsenal every time through the lineup is just unrealistic.

But if you can get a bloop single, a walk and a home run, that might be all the offense you need.

Because of the lights-out pitching, the fewer home runs aren’t getting players to put more balls in play though, it’s just bringing down offense around the league, which no one wants.

Balls in play per game are about the same they have been the past two years and are down from any year prior to 2019, league slugging percentage is lower than it’s been since the start of the steroid era and league batting average is five points lower than it was in 1968! The year pitching was so dominant the mound was lowered.

There are only a couple of possible factors that could lead to all this. The main one is, once again the ball has changed. The other is the addition of humidors in all 30 ballparks instead of the nine parks that had them before.

Those brought offenses down in parks like Colorado and Arizona, where the humidor added water to the ball, but in naturally humid climates like Miami, it should have the opposite effect and remove water from the ball, leading to more bounce off the bat.

It seems pretty clear to me that MLB has continued to mess with the ball in an effort to respond to calls that fans wanted more balls in play, fewer home runs and more consistent action, but that’s not what has happened. The coming ban of the shift and pitch clocks might actually have that affect, but baseball with a league average under 1-for-4 isn’t all that fun to watch. And seeing batters square up a ball, watch it fly and have it land in a fielder’s glove 15 feet in front of the wall just isn’t exciting.

If the weather starts to heat up, but the bats don’t, it might be about time to bring back to rabbit ball and let the home runs fly.