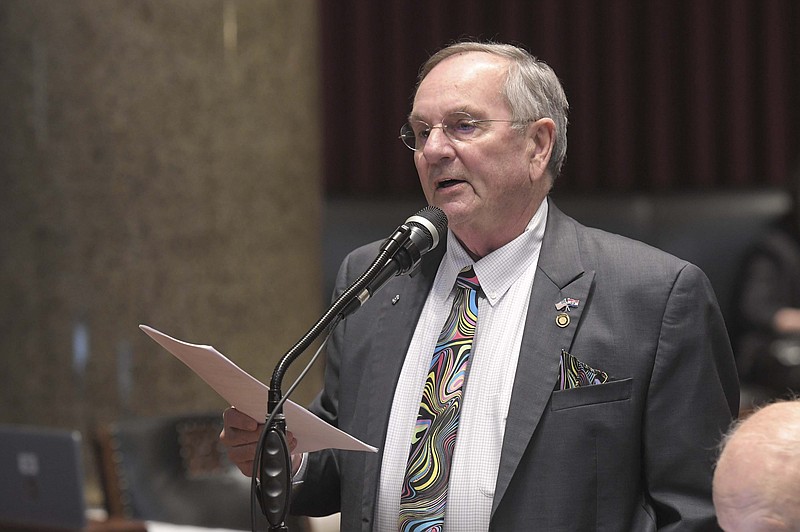 Courtesy/Tim Bommel Rep. Dave Griffith, R-Jefferson City, speaks on the floor of the Missouri House while presenting SCS HB 2090 for final approval. Pending the signature of the governor, the bill allows the salaries of state employees to be paid in biweekly installments along with other provisions added as amendments.

HB 2090, sponsored by Jefferson City Republican Rep. Dave Griffith, would change state workers' pay schedules from the state treasury. While state employees are currently paid on the 15th and last working day of each month, the bills would allow them to be paid on the same day every two weeks, increasing the number of pay periods from 24 to 26 in a typical year.

The bill was amended in committee to eliminate the Personnel Advisory Board, a group within the Office of Administration that approves classifications and pay plans for state employees along with making recommendations to the governor and the director of the Division of Personnel.

These duties would fall to director of the division and the commissioner of administration under the latest version of the bill.

"We're really doing some good things for the state of Missouri as a whole -- not only for our state employees but all of our taxpayers as well," Griffith said. "This bill certainly is different than when we sent it over to the Senate, but in many respects, I think it's better than what it was."

While the basic measures had received extensive bipartisan support throughout the legislative process, last-minute additions from the Senate caused heartburn on the House floor. The upper chamber added a new income tax credit for the 2021 tax year, with a maximum of $500 for those filing and individual tax return and $1,000 for couples filing jointly, with the amount based on the lesser of the income tax due for the year. The fund is also capped at $500 million.

House Budget Chairman Rep. Cody Smith, R-Carthage, said the program was added by his counterpart in the Senate and further amended to add an income level cap of $150,000 for individuals or $300,000 for couples to qualify. While he said he didn't approve of the caps, Smith encouraged the body to vote the bill through.

"I won't let perfect be the enemy of good," Smith said on the floor. "It's important to keep in mind that these are real tax dollars that are going back to real taxpayers, and this is not a redistribution of wealth but giving money back to taxpayers when we're in a situation when state government has too much of it."

Democratic members noted the credits would benefit wealthier Missourians paying income tax more, while those who did not pay income tax or not as much would not benefit.

Debate in the lower chamber lasted more than an hour, with Rep. Yolanda Young, a Democrat from Kansas City, telling Griffith his bill that had once been lauded by both sides for its focus on state workers had been soured by divisive amendments.

"What's clear to me today as evidenced by so many people standing up on both sides is that now why was good has become bad in some ways because we're not all united now on this bill," she said.

The bill as passed also included a section allowing taxpayers to receive a refund when the Department of Revenue's negligence or misinformation causes a taxpayer to collect and remit those taxes, language aimed at wedding venues that were unable to recollect funds that were wrongly collected.

Another provision would prohibit COVID-19 vaccine requirements for state employees.

"The bill that was sent over wasn't the bill that came back -- in many ways, this is better. It went over clean and came back with three amendments I was fine with," Griffith said in an interview with the News Tribune. "The most important thing is that we take care of our state employees, and this was just another way to listen to their needs and show how much we appreciate them."

A parallel Senate effort from fellow Jefferson City Republican Sen. Mike Bernskoetter, which contains a myriad of language on educator certification and task forces. That bill is awaiting action on the House floor.

Both lawmakers said their bills were an effort to further aid the state workforce, which makes up much of their constituency.

The state is the largest employer in the area with around 14,000 state employees calling the Capital City home, according to the Jefferson City Area Chamber of Commerce.