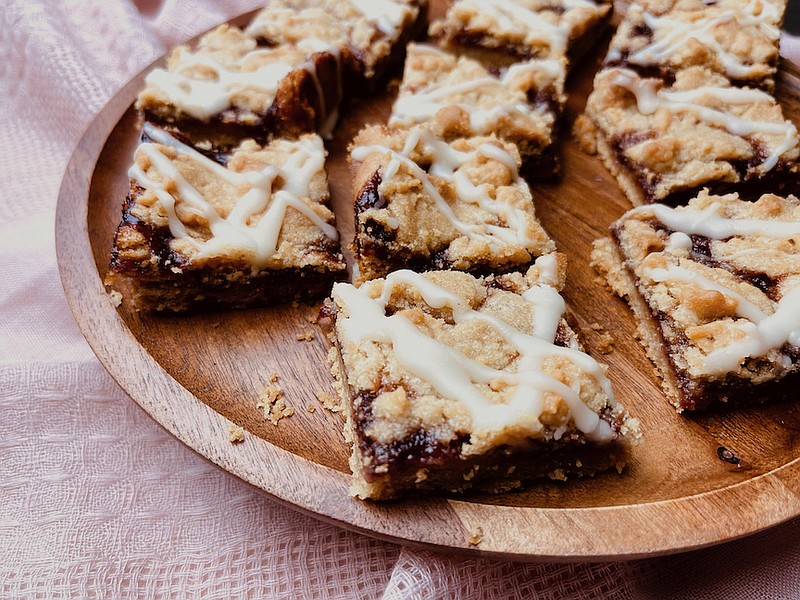 It is one of two included from Arkansas. The headnote reads: "Inspired by Gloria Rankin's sweet twist on the American staple, PB & J sandwiches, these Peanut Butter and Jam Bars are perfect to pair with a glass of milk," and it cites Rankin as a Best of Show winner at the Conway County Fair.

I was puzzled by the phrase "inspired by," so I did a little digging. According to a story by Janna Virden at 501lifemag.com, Rankin's recipe for Peanut Butter and Jam Bars won Best in Show at the 2013 Conway County Fair. Virden's story included Rankin's winning recipe. Comparing them side-by-side, I noticed Gershman increased the jam by ¼ cup and reworded the instructions. Rankin drizzles her recipe with a basic glaze made with butter, confectioners' sugar, vanilla and water. Gershman's optional glaze offers bourbon or brandy as substitutes for the vanilla. I used vanilla.

(The other Arkansas recipe in the book was inspired by Lawana Whaley's Raspberry Cream-Filled Cake, which won Best of Show at the Garland County Fair in 2007.)

I think this recipe would work great with any kind of jam you like with peanut butter. I used low-sugar strawberry jam I made last spring because I didn't have any raspberry, and strawberry is what I prefer on my PB&J. Blackberry would be excellent as well.

Cool and drizzle with the glaze.

For the glaze, heat butter in a 1-quart saucepan over low heat until melted. Mix in confectioners' sugar and vanilla. Beat in hot water, 1 teaspoon at a time until smoother and of desired consistency.