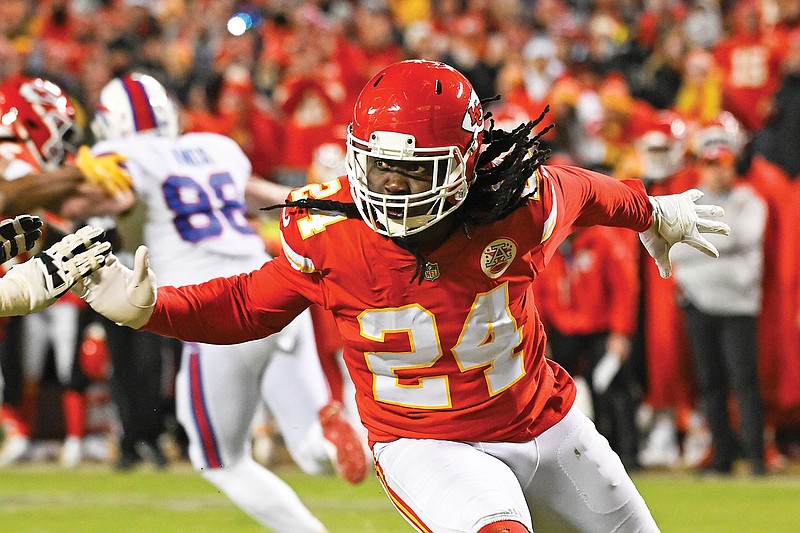 In this Jan. 23 file photo, Chiefs linebacker Melvin Ingram rushes the backfield against the Bills during the second half of an AFC divisional playoff game at Arrowhead Stadium in Kansas City. (Associated Press)

KANSAS CITY -- The Kansas City Chiefs placed an unrestricted free-agent tender on defensive end Melvin Ingram and traded for Houston cornerback Lonnie Johnson on Monday, hoping to add two more pieces to a defense that was revamped during the NFL draft.

The seldom-used UFA tender means the Chiefs essentially offered Ingram a $4.4 million contract for next season, which represents 110 percent of his pay from last season, while still giving the veteran pass rusher the chance to negotiate with other teams.

If Ingram signs elsewhere before July 22, though, the Chiefs could earn a compensatory pick in next year’s draft.

The Chiefs improved one of the league’s worst pass rushes last season by drafting Purdue defensive end George Karlaftis in the first round Thursday night, then adding Wisconsin linebacker Leo Chenal in the third round Friday night. But the Chiefs had otherwise done little in free agency to improve a group that suddenly plays in a division featuring quarterbacks Russell Wilson in Denver, Justin Herbert in Los Angeles and Derek Carr in Las Vegas.

Ingram arrived in Kansas City in a midseason trade with Pittsburgh last season, when the Chiefs were trying to inject some life in their dismal pass rush. He had four sacks and 33 pressures in nine regular-season games and three playoff games.

The Chiefs also acquired Johnson from the Texans on Monday, sending a conditional seventh-round draft pick for him. His acquisition came after the Chiefs used the No. 21 overall pick on Washington defensive back Trent McDuffie and a fourth-round pick on Fayetteville State’s Joshua Williams along with drafting a pair of safeties.

Johnson started seven of 14 games last season in Houston, playing alongside safety Justin Reid, who signed with the Chiefs earlier in free agency. The second-round pick in the 2019 draft has started 19-of-44 games in his career.

In other news, the Chiefs added an intriguing option among their undrafted free agents by signing Clemson wide receiver Justyn Ross, who was once viewed as a potential first-round pick before a spinal disorder threatened his career.

Ross caught 112 passes for 1,865 yards and 17 touchdowns during his first two seasons with Clemson, helping the Tigers win the national championship after his freshman season. But he was diagnosed with a congenital fusion of his neck and spine in the spring of 2020, forcing him to undergo surgery and miss the entire season.

The 6-foot-4, 205-pound Ross returned to Clemson last year to catch 46 passes for 514 yards and three touchdowns, despite dealing with a stress fracture in his foot for much of the season.

The Chiefs traded Tyreek Hill to the Dolphins for a package of draft picks and lost Demarcus Robinson and Byron Pringle in free agency, resulting in a vastly different wide receiver group for Patrick Mahomes heading into training camp.