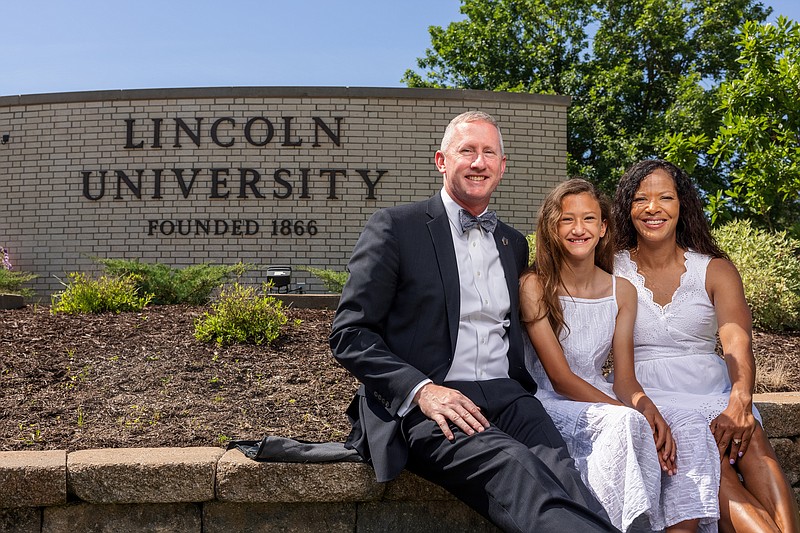 The historically Black university has also served as a regional institution of higher education in Mid-Missouri for decades. The result is one of the most diverse universities in the nation.

University President John Moseley is looking to support that dual mission, calling Lincoln's diversity a strength and a weakness.

"I don't know an institution in the country that wouldn't want our diversity," Moseley said. "Yet some struggle and want to be different from who we are and how we are, regardless of what side they sit on. And it makes no sense to me."

Lincoln had an entirely Black student population in 1954, Moseley said.

While the U.S. Supreme Court decision in Brown v. Board of Education ended racial segregation in public schools and introduced Black students to many predominantly white schools, it had the reverse effect and introduced white students to Lincoln.

Although it has maintained its HBCU heritage and mission, Lincoln remained a majority white institution from 1960-2017. Some years, the student population was 80 percent white, Moseley said.

"We're one of the most diverse institutions in the country," he said. "In my opinion, our diversity is our greatest strength and our biggest challenge."

Diversity is an important part of the education Lincoln provides, Moseley said, because it prepares students for life beyond college.

He said the university's diversity lends itself to learning about the experiences of others and instills a confidence in students that allows them to be themselves in spaces with people who don't come from similar backgrounds.

"If we have a nursing major from Russellville, Missouri, likely it's going to be a white student," Moseley said. "If that nurse ends up in St. Louis and she's working in a hospital in St. Louis and an African American comes in because they're in need at that point, I'd like to think Lincoln University has helped that student develop a cultural competency that allows them to treat that patient with the respect and dignity that everyone of us have come to expect."

The dual role is also a challenge, however.

Moseley said there's an ever-present consciousness to consider how decisions will be taken by different students, faculty, staff and alumni who may have expectations for Lincoln.

That hasn't been a significant consideration at the previous HBCUs and universities Moseley has worked at, he said, but their student populations weren't as diverse.

Moseley said he's also conscious of the fact he's the first white university president since Richard Baxter Foster, the first principal of the Lincoln Institute in 1866.

"But I also know how I was raised as a person and the things that I believe in as a person, and the values that I hold," he said. "And I think that many of those are shared by people regardless of our backgrounds."

Moseley and his administration use the crossroads of being an HBCU and a regional institution to shape decision-making, he said.

The dual identity discussion is most prevalent in recruitment and admissions, Moseley said. Some want the university to focus on recruiting students from local high schools, and others want Lincoln to concentrate on national recruiting.

Cole County is 80 percent white and all neighboring counties -- except Boone County (76 percent white) -- are at least 85 percent white, according to the 2020 U.S. Census.

He said there's no reason the university can't do both.

Lincoln's location between Missouri's two major metropolitan areas, as well as within driving distance of several major cities throughout the Midwest, sets it up for success, Moseley said.

The university has been using its admissions office for national recruiting and has staff regularly visiting schools within a 30-mile radius of campus to establish a greater presence for local students.

And he said there's a significant population of non-traditional students the university can begin attracting with more online courses and resources. Those offerings could attract students and faculty who don't want to leave larger cities, he added.

"Diversity cuts over a lot of lines," Moseley said. "And so having a better online presence gives us potential to move into spaces we're currently not residing in."

Moseley said he also wants to get more alumni engaged in helping Lincoln grow, particularly those around Jefferson City.

"I can't speak in a room in Jefferson City without asking who's a Lincoln grad and being surprised that there's even more than I knew before I got there," he said.

He said he wants to ensure all alumni, no matter where they are now, feel like they are still involved with Lincoln and are proud of their alma mater. Involvement doesn't always mean donating money, he said, but it could be working with alumni associations or offering to speak to students.

Moseley said Lincoln has and always will maintain its HBCU heritage and history, as well as the mission of providing an education for all.

"We believe in giving students a chance at an education because we understand the value of an education to not only that student's life but for generations after them when they're successful," Moseley said. "So as we sit here in 2022, we stand strong on our values as a historically Black college and university, while also understanding that for many of our students, we are a regional institution that provides excellent educational opportunities to all of our students."

The values of an HBCU reinforce a goal of helping all students succeed, he said, so it's crucial the university teaches the whole student and provides abundant life experiences during their time on campus.

"We are that melting pot," Moseley said.