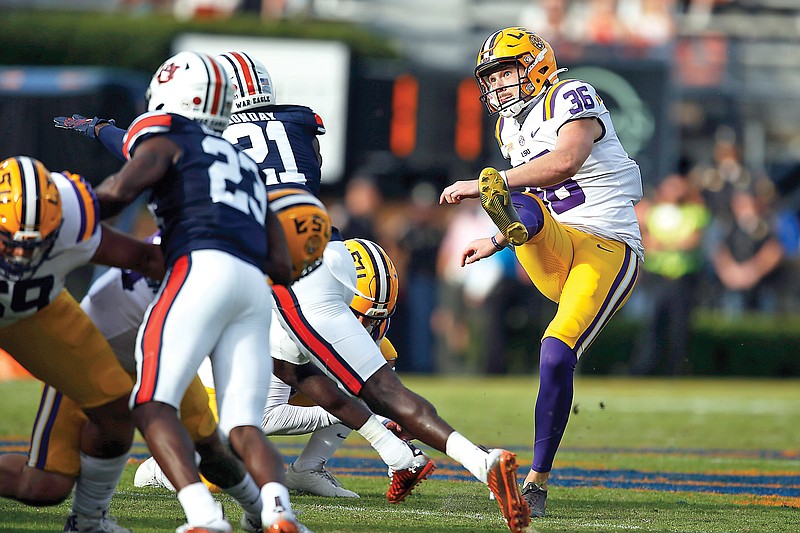 In this Oct. 31, 2020, file photo, LSU kicker Cade York (right) boots a field goal during the second quarter of a game against Auburn in Auburn, Ala. (Associated Press)

LAS VEGAS -- In Las Vegas, which bills itself as the “Entertainment Capital of the World,” an NFL draft bereft of star quarterback prospects wouldn’t seem a fit.

It didn’t matter, though, because as personnel people throughout the league predicted, the 2022 crop was so deep, even in the final four rounds, there were plenty of highlights.

They didn’t include the passers very much, but such was the quality of QBs.

Running backs and kickers -- kickers? -- were more of a focus for much of Day 3 on Saturday.

Indeed, two punters and a placekicker went as the final day of selections began before any more quarterbacks were taken. Maybe it shouldn’t be surprising that LSU placekicker Cade York went to Cleveland at No. 124 overall, followed by Penn State punter Jordan Stout six spots later to Baltimore. At No. 133 to Tampa Bay it was punter Jake Camarda of Georgia -- four spots before the fifth quarterback in total, Western Kentucky’s Bailey Zappe, headed to New England.

Of course, it can’t be ignored the Patriots once had some luck with a late-round QB. What was his name?

“With the draft, it’s always a tossup, but I did have a good idea that I was going to be a Raven,” said Stout, who will compete with veteran Sam Koch. “I’m extremely excited about it.

“One big thing for me is that I know special teams is always very successful with the Ravens.”

True. Justin Tucker has been the most accurate placekicker in NFL history, and Koch has been a mainstay in Baltimore since 2006.

Cleveland saw in York exactly what every team wants in a kicker with a game on the line: utter confidence.

“I believe that I am the best kicker in this draft because I have been able to make big kicks in big situations,” he said. “I have been put out for a lot of long field goals in tough situations, and I still brought out good results in it. I think that is what makes me the best.”

Many scouts considered Camarda the best punter in the nation. He was the 11th player selected from the national champs.

“I think it has certainly prepared me for the next level, playing at Georgia for four years, playing in every single biggest game you can possibly imagine,” Camarda said. “The Bucs certainly are a team that’s looking to make a big run. I definitely think that’s something with my history, playing in those big games and big moments, I certainly think it’s going to help play being with the Bucs.”

Another punter, San Diego State’s left-footed Matt Araiza, was the opening pick of the sixth round, by Buffalo. He’ll go from kicking in the pristine conditions of San Diego to the often-frigid Western New York.

“I’m kind of excited for that challenge,” said Araiza, who would someday like to punt, placekick and hold in the NFL. “I love it. I think the biggest job in the NFL is to out-punt the player across from you. As long as I can bring better field position to my team than the team we’re playing against, that’s kind of my goal.

And yet another punter, Trenton Gill of North Carolina State, was the 255th selection by Chicago.

The philosophy of taking running backs deeper into proceedings is nothing new, and several highly accomplished ball carriers were taken in Round 4. After Tampa Bay made tight end Cade Otton of Washington the leadoff pick -- Rob Gronkowski has not publicly committed to return -- Houston grabbed RB Dameon Pierce of Florida. From there, the likes of Zamir White of Georgia, Isaiah Spiller of Texas A&M, Pierre Strong, a standout from South Dakota State of the FCS and Hassan Haskins of Michigan went off the board.

The fifth round, however, got started with Washington grabbing North Carolina QB Sam Howell, who was projected as a much higher selection just a year ago, but didn’t have an outstanding final season for the Tar Heels.

Howell called it “a little stressful” to sit through four rounds.

“I was just hanging out and just waiting for a call, and I’m so glad it was Washington that called,” Howell said. “This is a perfect spot for me. It’s a team I wanted to play for all along.”

Zappe wasn’t hearing from any comparisons to New England’s 2000 sixth-rounder at No. 199, Tom Brady.

“I am continuing to be myself,” he said. “I am not trying to be anybody else. I am going to come to work every day and get 1 percent better. That is how I look at it. I do not worry too much about the naysayers and critics. The Patriots believe in me, and those coaches, players, and organization believed in me, and those are the people I’m going to try to prove right, that this pick was the right one.”

Cam Heyward compared the Steelers to a family. After, naturally, telling Connor his first job was to carry around older brother’s shoulder pads.

No surprise the national champion Georgia Bulldogs dominated these proceedings overall. They set a record through six rounds by having 15 selected: eight on defense, six on offense, and punter Camarda, which is the number they finished with. And Cincinnati had more draftees (nine) than Ohio State (five).

At the other end, Texas didn’t have a player drafted for just the second time since the 1970 merger. The other was in 2014, the last class for coach Mack Brown, who led the Longhorns to the 2005 national championship.

Texas, on its third coach since Brown, wasn’t the only Big 12 school from the football-crazed Lone Star State to get shut out. TCU went without a pick for the first time since 2008 after the Horned Frogs and 20-year coach Gary Patterson agreed to part ways midseason last year.