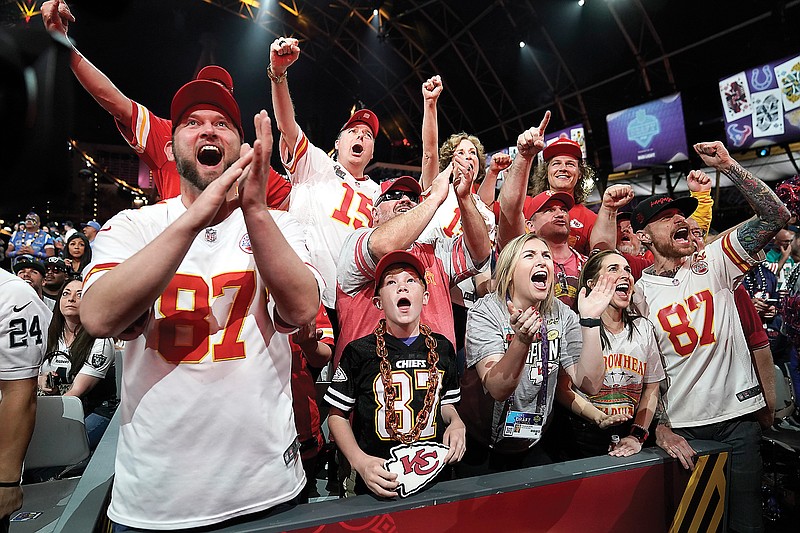 KANSAS CITY -- Brett Veach found himself in the same vexing position as every other NFL general manager during the draft, trying to remain true to his scouting board -- and all the work put in this past year -- while also understanding there were glaring holes on the roster that need to be filled.

Turns out the Chiefs GM need not worry: In round after round, the AFC West champs found the top players left on their board serendipitously addressed some of their biggest weaknesses heading into next season.

One of their top cornerback targets, Trent McDuffie, was there to trade up for at No. 21 overall without sacrificing No. 30, where the Chiefs nabbed one of their favorite pass rushers, George Karlaftis. And when their first of two second-round picks rolled around, the Chiefs got one of their favorite wide receivers in Skyy Moore, a multifaceted talent who many gave a first-round grade and who should help the Chiefs overcome the loss of three-time All-Pro Tyreek Hill.

It kept going like that all weekend: With their other second-round pick, the Chiefs plugged a hole at safety with big-hitting Bryan Cook. Third-round pick Leo Chenal fits perfectly among Kansas City linebackers, fourth-rounder Joshua Williams will provide cornerback depth and offensive lineman Darrian Kinnard in the fifth offered exceptional value.

All areas of need, all addressed without too much stress.

“We joked about that, too,” Veach said. “It was one of those weird setups where we were able to stick to the board, stick to the value, players’ talent and upside, and yet at the same time, address key needs for our team.”

The biggest needs were clearly on defense, where the Chiefs struggled mightily in the playoffs, then lost All-Pro safety Tyrann Mathieu in free agency. The Chiefs signed Justin Reid as his replacement and made a few other moves, but it was clear the Chiefs intended to get younger and faster on that side of the ball through the draft.

Five of their first six selections came on that side of the ball.

McDuffie should help replace Charvarius Ward, who left for San Francisco in free agency, while Karlaftis and Chenal should help a pass rush that was among the worst in the NFL last season. Cook should be a lot to handle in the defensive backfield, while Williams offers major upside after playing Division II college ball.

In fact, things went so well for Kansas City, Veach even managed to trade back four spots and still get his guy -- Moore in the second round. It was the first time Veach, known for aggressively trading up, had ever traded down.

“Yeah, it was exciting. I told (Chiefs chairman) Clark Hunt that I think I have everything checked off of my to-do list and the only thing I have left is a trade-down,” Veach said with a laugh. “We took a little time to celebrate that.”

• As first-round picks, McDuffie and Karlaftis should play meaningful downs right away. But watch out for Chenal, whose ability to play the SAM linebacker spot allows Willie Gay Jr. to slide to his more natural weak-side spot with Nick Bolton, a second-round revelation last season, calling the shots from the middle linebacker spot.

• The Chiefs signed Marquez Valdes-Scantling and JuJu Smith-Schuster to remake their wide receiver room, but Moore gives the offense an element Hill also brought: speed and creativity. His ability to get open when plays break down is ideal for Patrick Mahomes, whose pocket passing is good but whose throwing ability on the move is elite.

• Chiefs coach Andy Reid freely admits to liking players with mean streaks and he got a couple this weekend.

Chenal, the linebacker from Wisconsin, described himself this way: “People who watch my game know I’m going to be one of the most violent guys on the field at all times.”

And Kinnard, the offensive lineman from Kentucky, wasn’t happy he had to wait until Day 3 to hear his name called, saying: “Yeah, I’m going to play pissed.”

• Williams, who played at Fayetteville State in North Carolina, was the first player drafted from a Historically Black College or University this year; none were selected last year.