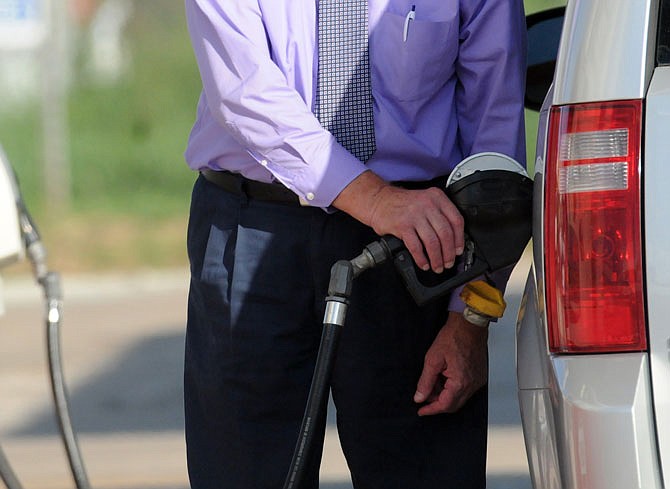 Republican lawmakers in the state Legislature have introduced more than a dozen bills impacting the latest statewide increase to the gas tax, the first installment of which took effect in October.

If successful, transportation and infrastructure leaders at the state, county and city governments said the loss of revenue would impact budgets and their ability to fix roads and bridges.

"Generally speaking, this is across the board," Cole County Public Works Director Eric Landwehr said. "It's not just Cole County, it's Jefferson City, it's MoDOT, everyone in the state has the same thing. There's not enough money to do what we really feel needs to be done to keep things in good condition.

"This money is very important to get us caught back up and get us in a position where we can be ahead of the curve as far as keeping our pavements and bridges in good condition," he continued.

The gas tax was passed by the General Assembly and signed into law by Gov. Mike Parson in 2021. It imposed a 2.5 cent per gallon tax in October and the tax increases by 2.5 cents each July through 2025 for a total increase of 12.5 cents per gallon.

Now, legislators are looking at a variety of ways to reverse that decision.

Members of the Missouri House have introduced 11 pieces of legislation impacting the gas tax, some of the most severe of which are a complete repeal of the tax and a six-month pause on the entire tax. Members of the Senate have introduced three bills and four resolutions relating to the gas tax and Missouri Department of Transportation's administration of its revenues.

HB 1594, sponsored by Rep. Sara Walsh, R-Ashland, is a complete repeal of the gas tax increases approved last year. The bill passed out of committee in February and is heading to the House floor for debate.

In the committee hearing, Walsh said the tax is unnecessary given the state's historic revenues and federal infrastructure dollars flowing down to states. Instead of MoDOT and local public works departments receiving additional funding through the tax, Walsh suggests the General Assembly kicks more state revenue their way.

The same line of thinking is behind a couple House bills to create a six-month gas tax holiday in Missouri. The legislation would suspend all state tax on fuel, not just the recent increase.

Fitzwater said the tax holiday is an effort to provide economic relief to people struggling to pay at the pump. He said he would want to fill any gaps the gas tax holiday would create in local budgets with the state's historic revenues.

"The first thing is getting this relief for everyday Missourians, and the second thing would be working on the budgets to ensure that those gaps will be filled with all the funds we have available to us," he said.

The legislation remains in committee, and Fitzwater said some details still need to be worked out, but there is support for using state revenues to replace what would be lost to the holiday.

Neither gas tax holiday bills nor the tax repeal bill contain language designating general revenue to replace lost tax dollars. Fitzwater said that would be done later as the Legislature sets the budget for fiscal year 2023.

Fitzwater pointed out that several other states and the federal government have passed a gas tax holiday or are considering it. He said he's hoping six months is long enough for gas prices to naturally fall.

State funds flow to county and city governments through the County Aid Road Trust program, which is supported by a combination of the state gas tax and taxes on vehicle sales.

Sheila Pearre, director of finance for the Jefferson City city administrator, said the city doesn't have enough data to determine how much of a loss the proposed repeal would amount to, but the six-month holiday could mean a loss of $632,520.

The city's potential loss in funding is equivalent to the amount it would spend employing five or six police officers, Crowell said.

Pearre said the tax holiday, if passed, would also be in effect primarily during summer travel months, which is when revenue from the gas tax is typically highest for the city.

Estimates were based on local revenue collected from the gas tax during an equal timeframe last year.

Crowell said a loss of funding to MoDOT also trickles down to county and city operations as the state has less money to help subsidize local projects.

"Something that may directly impact MoDOT could have an indirect impact on us as well," he said.

A repeal of the recent gas tax increases would mean an eventual annual loss of $750,000 for Cole County, Landwehr said.

Before the most recent gas tax increase, Cole County would typically receive an annual allotment of $750,000 from the gas tax. For each 2.5-cent increase, Landwehr said the county is expecting an additional $150,000 from the tax -- meaning the county's revenue would double by the end of the tax's five-year implementation.

However, Landwehr said the six-month gas tax holiday would impact the county more than repealing its recent increases.

"Repealing the increase would take us back to 2021 levels, but the gas tax holiday would actually cut our gas tax revenue and that would impact our budget," he said.

Landwehr said a six-month tax holiday would mean at least $400,000 in lost revenue for Cole County, which already operates on thin margins.

The increase in state funds funneling down to local governments is critical for continued street and infrastructure maintenance, Landwehr said.

Like MoDOT, construction and preservation costs for county and city governments have been increasing with inflation for 20 years. Funding for infrastructure improvements, however, hasn't been increasing.

"The cost to do what we do is rising faster than our revenues can keep up with," Landwehr said. "Because of that, we're having to find other means to keep our pavements in good condition."

Whereas 20 years ago the county would repair pavement with asphalt, now, because of rising costs, the county conducts more preventative maintenance and surface treatments such as chip seals and sealing coats, Landwehr said.

"With this gas tax increase, it's allowing us the ability to replenish some funds that are being sucked up by inflation," he said.

Landwehr said the additional funds are used to supplement the budget for materials -- such as asphalt, concrete, pipe, roadrock, etc. -- but the county isn't buying more, "it's just costing more."

"The gas tax increase has helped us out a lot in year one just to keep maintaining the same level that we were a year ago just due to inflation," he said. "If you go a year or two without taking care of things properly, that can cost you severely in the long run."

In subsequent years, Cole County's additional revenue from the gas tax will allow the county to catch up on deferred maintenance from the past 20 years, Landwehr said. The funds, he said, will support more timely and long-lasting treatments to roads and bridges.

MoDOT Director Patrick McKenna said the department is working with legislators to help them understand how gas tax revenues are used and what it would mean to lose that funding, noting that the impacts range from "pretty severe to really severe."

"In both scenarios, you're looking at a potential of a multi-billion -- as much as $3 billion-$3.6 billion of lost projects and projects that will not be done," McKenna said.

The department primarily uses gas tax funds to support its capital program, which means they are used to draw down federal dollars for improvement projects.

A repeal of the recent gas tax increases would mean MoDOT has to scale back its capital program by $3.6 billion, McKenna said, as the department would lose state money and some federal dollars it plans to draw down, and its ability to borrow money is diminished.

MoDOT will receive $1.2 billion in the five years the gas tax increases signed into law last year are fully implemented, McKenna said. All of it has been allotted to the department's five-year improvement plan and is primarily used to draw down three to four times that amount in federal funds.

MoDOT's five-year infrastructure improvement plan costs $7.7 billion, which is about $1.5 billion each year to address 1 percent of the state's transportation needs.

The repeal would immediately halt $1.7 billion worth of active and planned projects, he said.

Instead of replacing the state's transportation system every 100 years, the loss of funding would set the state back to a complete replacement every 180 years, McKenna said. And roads and bridges don't last that long.

MoDOT is one of the lowest funded transportation departments in the country in terms of miles of roadway to maintain, McKenna said, and with the latest increase to the gas tax, it's still in the bottom 10.

McKenna said MoDOT's purchasing power has been cut in half by inflation since the last time the state gas tax was increased about 20 years ago, and local governments are feeling those effects, too.

McKenna said the large influx of federal dollars designated for state infrastructure improvements is why the department needs more funding, and lawmakers recognized that last session when passing the tax increases. More federal money requires states to have more money to match the funds and bring them down, he said.

The six-month holiday would cost the department $326 million, according to an estimate by the Missouri Department of Revenue. McKenna said that's another $1 billion in federal funds that would be in jeopardy without state funds to match and draw down.

"If you're trying to put money in people's pockets to help during an economic hard time, suspending the gas tax is a really imperfect way of doing that," he said.

McKenna said he fully recognizes gas prices are soaring and that can be a strain on Missouri families, but the relationship between the tax and total gas price is small.

McKenna said he's frequently heard lost gas tax funds would be replaced in budget bills, but nothing has ever materialized.

"I would argue, why take a two-step measure if you're going to use general revenue to supplant the losses in the gas tax?" he asked. "Why not give that directly to citizens so that they get the money that you actually intend for them to get?"