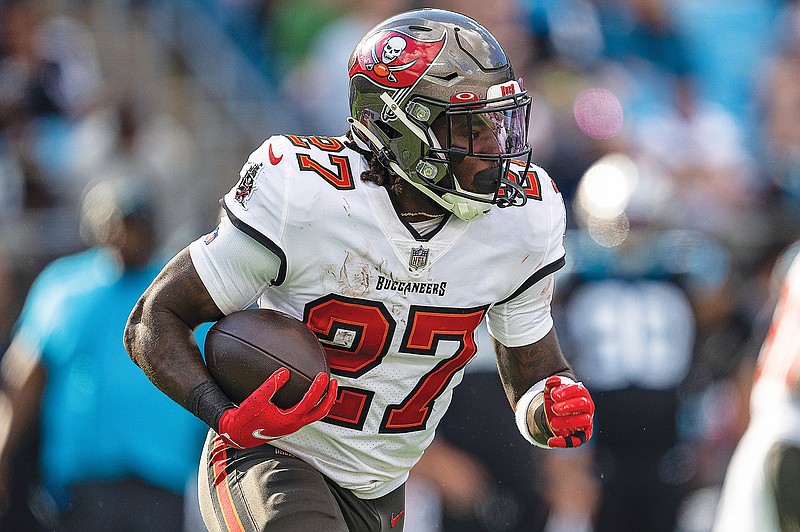 In this Dec. 26, 2021, file photo, Ronald Jones runs with the ball for the Buccaneers during a game against the Panthers in Charlotte, N.C. (Associated Press)

KANSAS CITY -- The Kansas City Chiefs have signed Ronald Jones to a one-year contract, a person familiar with the deal said Saturday, adding some depth behind Clyde Edwards-Helaire in the running back room.

The person spoke on condition of anonymity because the deal was pending a physical.

Jones was a second-round pick of the Buccaneers in the 2018 draft who started 25 of the 55 games he appeared in during his first four seasons in the league. Jones’ best came in 2020, when he carried 192 times for 978 yards and seven touchdowns in the regular season, then helped Tampa Bay defeat the Chiefs in the Super Bowl.

Jones ran 12 times for 61 yards in the Buccaneers’ 31-9 romp at Raymond James Stadium.

Jones effectively replaces Jerick McKinnon and Darrel Williams, both of whom are free agents, as the primary backups to the injury-prone Edwards-Helaire in the Kansas City backfield. The team also has tendered a qualifying offer to Derrick Gore but has little else in the running back room at this point in free agency.

The Chiefs have been actively retooling their roster during the offseason, especially after dealing three-time All-Pro wide receiver Tyreek Hill to the Dolphins last week in a blockbuster trade for a package of draft picks.

The Chiefs are still in the market for help on defense, particular at cornerback, where they lost breakout star Charvarius Ward to the 49ers in free agency. But they also could plug some of their remaining holes in the draft, where they have two selections in each of the first four rounds and 12 overall, thanks to the Hill trade and compensatory picks.