Speaker tells pro-life supporters to prepare for many more battles 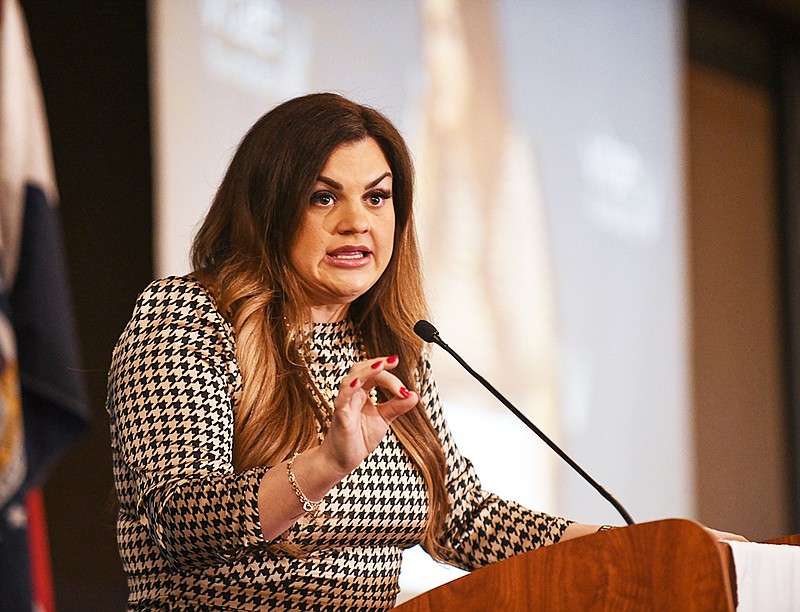 Keynote speaker Abby Johnson talks about what she sees as a dangerous trend in today’s society during Tuesday’s Vitae luncheon fundraiser in Jefferson City. (Julie Smith/For the FULTON SUN)

The change is going to lead to war.

A U.S. Supreme Court decision on the Mississippi abortion law, which essentially bans abortion, is expected in June, Johnson told about 400 listeners. However, she expects the Supreme Court to release its decision earlier.

Her expectation, she said, is that the court will leave it up to the states to decide individually on abortion.

So instead of fighting one battle nationally, pro-life supporters will be in battles in each of the 50 states, she said during the 30th annual Vitae Foundation fundraiser.

A global nonprofit that started out in Jefferson City, Vitae uses messaging to intervene and reach women as they consider abortion. It has invested millions of dollars in research to become a "knowledge base" on abortion decision-making. It has established a network of pregnancy help centers across the nation.

All her life, Johnson has been an advocate for women. Her passion surrounding a woman's life to choose whether to have an abortion led her to become a spokesperson for Planned Parenthood.

However, she had a change of heart. And she left the organization to join the pro-life movement and now advocates for the unborn. She wrote a best-selling book, "Unplanned," which chronicles her experiences with Planned Parenthood and her decision to leave the organization.

Soli Deo Gloria studio released a movie adaptation of the book in 2019. Johnson is a frequent speaker on Fox News. And on Tuesday she became the first speaker to present a message to the foundation a second time.

"We don't know what's going to happen," Johnson said. "I don't think the Supreme Court is going to come back and say, 'Everything stays the same.' Something is going to change."

Abortion, as we know it in the United States, is going to change.

Johnson said she wonders if pro-lifers are ready.

"I wonder, as people of faith, are we ready for that change?" she continued. "Because -- abortion, to the left -- is not about women's health. It is not just a procedure that they want to protect. Friends, abortion to these people is a sacrament."

It is so much more than most on the pro-life side understand it to be, she said.

It is evil. It is child sacrifice, she said.

"We don't call it sacrifice today. We call it something more palatable," Johnson said. "We call it 'reproductive justice.' We call it 'choice.' At the end of the day, it is child sacrifice."

"It is demonic -- what is happening," she continued. "If you start warring with these demons, when you start removing that sacrament -- I don't think you understand what's about to happen in our country."

If Roe v. Wade is overturned, about half the states in the United States will make abortion illegal, Johnson said.

"That's when the real battle begins," she said.

Vitae President Debbie Stokes told listeners that efforts to reach women at abortion clinics have been successful, but the fight to prevent abortions has moved online. And Vitae is researching how best to reach women there.

More women are choosing chemical abortion, the use of the "abortion pill" RU-486 to bring about an abortion. RU-486 blocks a hormone a woman's body needs when she becomes pregnant.

Women can order the pill online.

"The opposition not only claims that it's safer than Tylenol, which is a lie, but they also claim that it is easily ordered online and mailed, no matter what state laws say," Stokes said, "which, unfortunately, is the truth. Unbelievably, pregnancy is not even a criterion to obtain the pills."

She added that some organizations encourage women to obtain abortion kits, which they call "abortion provision pills," just to keep on hand, in case they might need them.

"Now, we have a director of the (U.S. Food and Drug Administration) who wants to see abortion pills available over the counter," Stokes said.

The luncheon was the first of two events Vitae holds during its annual fundraiser. It also held a dinner during the evening.

However, at the end of the luncheon, as Vitae leadership began asking participants to donate to the foundation, a fire alarm sounded, forcing the evacuation of the hotel. 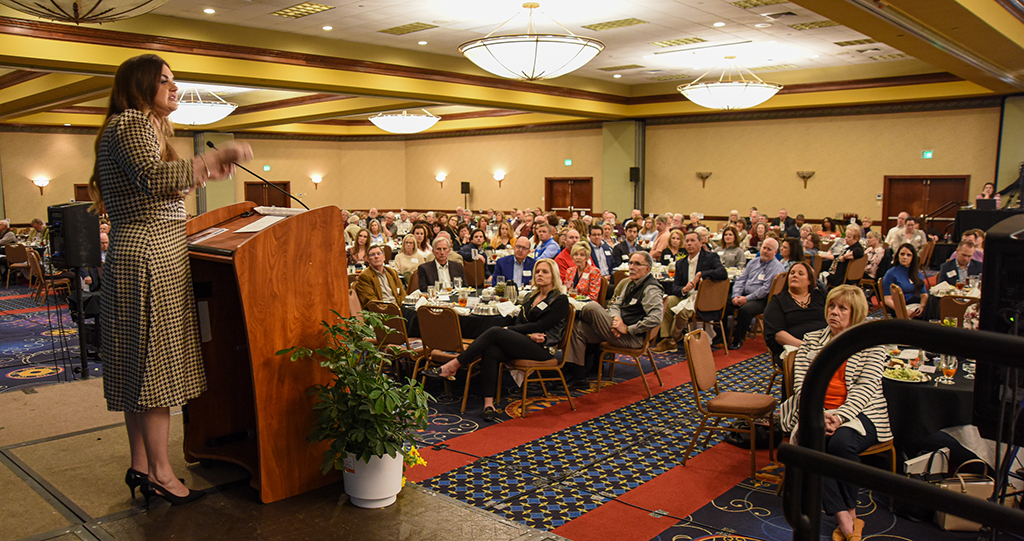 Keynote speaker Abby Johnson addresses nearly 400 people in attendance about what she sees as a dangerous trend in today’s society at Tuesday’s Vitae luncheon fundraiser in Jefferson City. (Julie Smith/For the FULTON SUN) 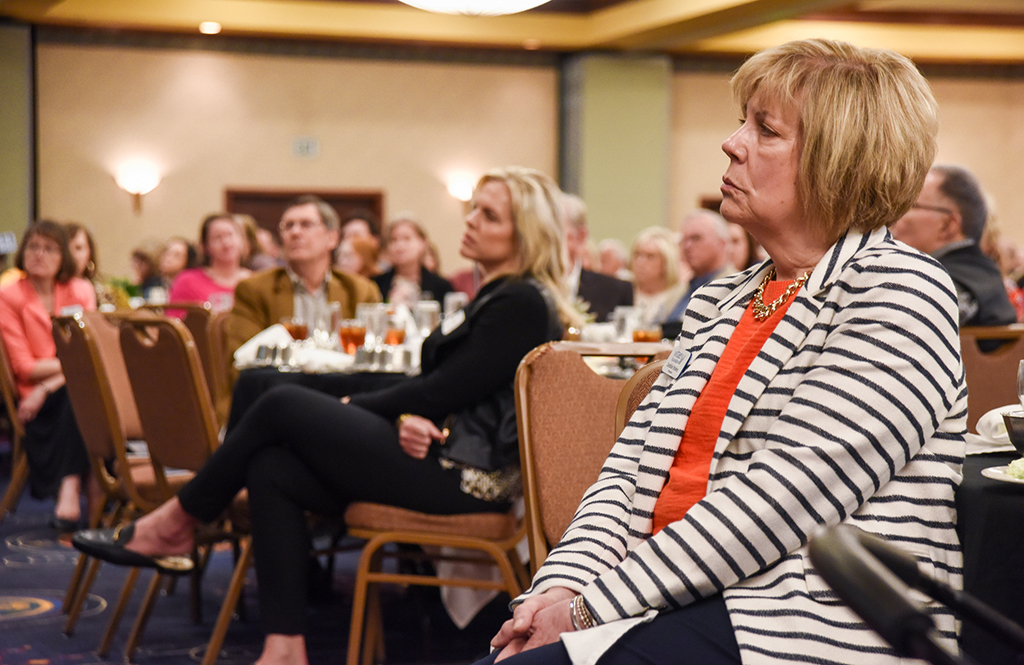 Vitae President Debbie Stokes, near, listens Tuesday as keynote speaker Abby Johnson talks about what she sees as a dangerous trend in today’s society during a Vitae luncheon fundraiser in Jefferson City. (Julie Smith/For the FULTON SUN) 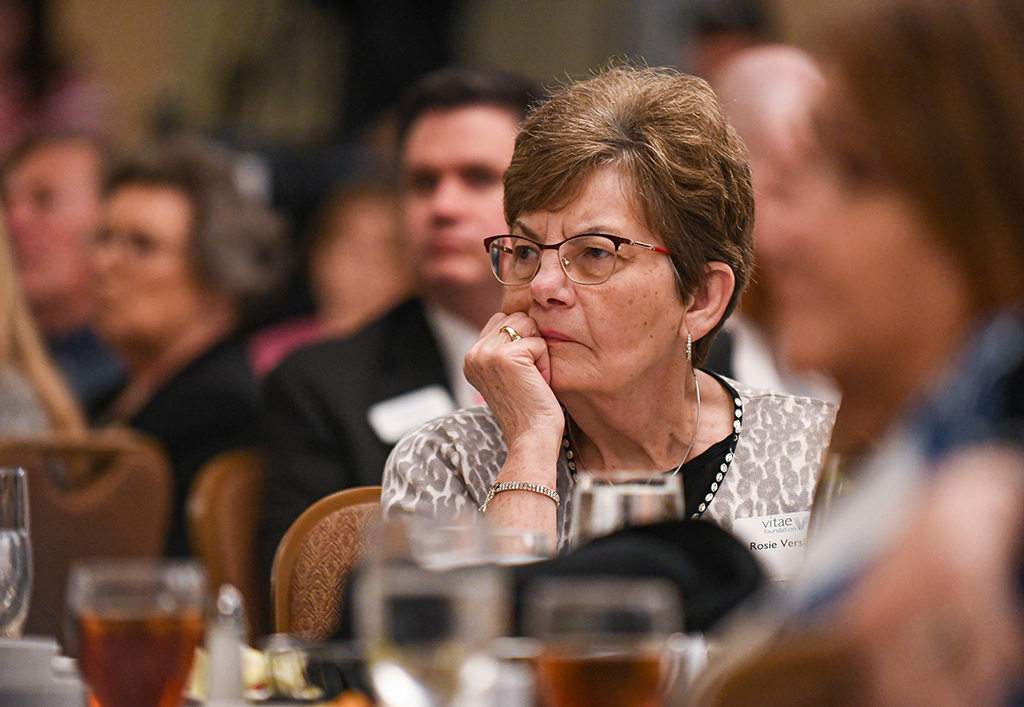 Vitae luncheon attendee Rosie Verslues listens intently Tuesday as guest speaker Abby Johnson talks about some of the dangers facing young girls and women today. Verslues is a longtime supporter of Vitae and a volunteer with Birthright for more than 30 years. (Julie Smith/For the FULTON SUN)