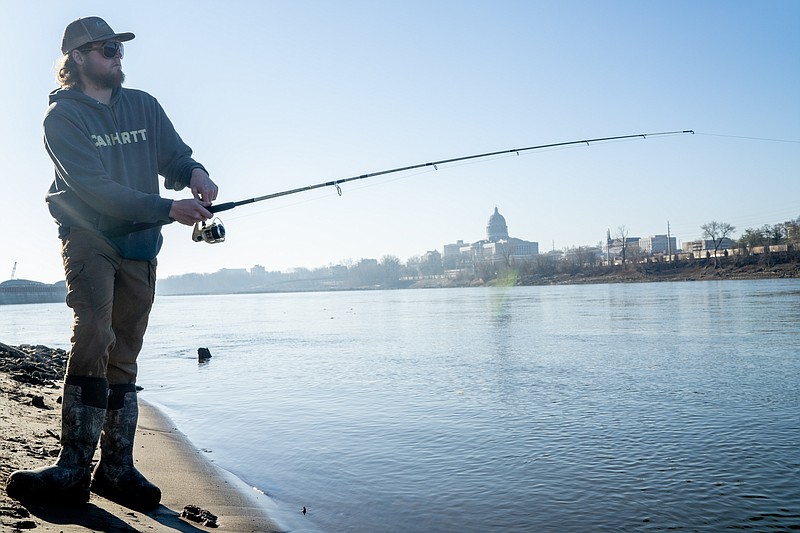 Ethan Weston/News Tribune Tanner Adamick tugs on his line to try and lure a fish to bite on Wednesday, March 16, 2022 at the Noren River Access. Adamick was trying to catch a paddlefish, also known as a spoonbill.

Despite pushback from the Conservation Department, lawmakers have successfully moved the Conservation Commission one step closer to being twice its size through a proposed amendment to the Missouri Constitution.

House Joint Resolution 107, sponsored by Rep. Chris Dinkins, R-Lesterville, would change the composition of the commission from four governor-appointed and Senate-approved commissioners, to eight non-partisan commissioners who are elected from the state's congressional districts.

The amendment recently moved out of committee with a vote of 6-4 and is headed to the House floor for debate.

During a public hearing on HJR 107, Dinkins said she sponsored the bill to create more transparency and representation within the commission as it is currently not as accessible in rural areas of the state.

If passed and approved by voters, the amendment would change the makeup of the commission for the first time since it was created in 1936.

"The commission was created to remove conservation as much as possible away from the politics," said Aaron Jeffries, deputy director of Missouri Department of Conservation (MDC). "Having elected positions would obviously put politics right back into conservation."

Commissioners serve six-year terms with no salary or other compensation and are responsible for appointing the MDC director, serving as MDC policy makers and more, according to the MDC website. No more than two commissioners are allowed to be of the same political party.

Of the four appointed members currently serving on the commission, two are independent and two are Republican.

The amendment states the eight members would be non-partisan, meaning party affiliation would not be listed on the election ballot, but some voiced concern that through any election non-partisanship is nearly impossible.

"We do need representation from all corners of the state, and I appreciate that you want to enlarge it," Rep. Willard Haley, R-Eldon, said at a public hearing. "I do have a concern with the word elect ... because there could be millions and millions of dollars to go in to get somebody elected to this commission, that is a non-paid position."

The change in the commission also received opposition by some environmental interest groups.

"The Missouri Department of Conservation already has an incredible track record of balancing the interests ... we have not seen any need for the Conservation Commission to be changed," said Melissa Vatterott, of Missouri Coalition for the Environment. "We're concerned that that's going to impact such important roles that really shouldn't be politicized."

More than 50 written and in-person testimonies have been in made in favor of the amendment. Proponents allege the current four-member commission does not represent the concerns of the whole state.

"We have a very diverse state with many regions all having different issues and a commissioner from each area is only right," a Missourian wrote in a testimony supporting HJR 107. "Electing the commissioners also gives the people in a given area the ability to have someone they feel represents their areas views be on the commission versus an appointee."

If approved by Missouri voters, the election would be held in the eight respective congressional districts that exist as of Jan. 1, 2023. Dinkins filed similar legislation in previous sessions.

HJR 107 is just one of the latest efforts to diffuse some of the authority of the Conservation Commission.

In 2020, the department and commission sued the former Office of Administration Commissioner Sarah Steelman and Attorney General Eric Schmitt regarding the commission's spending authority, the News Tribune previously reported.

The commission agreed to purchase 510 acres of land in St. Clair County, 350 acres of which included a tall grass prairie habitat. The commission approved the purchase and asked Steelman to make the payment from the Conservation fund.

The fund was created through revenue from a sales and use tax outlined in a 1976 amendment to the Missouri Constitution.

The Cole County Circuit Court sided with the Conservation Commission, finding that constitutional provisions grant the commission power over the Conservation fund. However, the state later appealed to the Missouri Supreme Court where it heard oral arguments in 2021. No further action has been taken in the case.

Other legislation has been filled this session that could potentially create other legal problems for the commission.

House Joint Resolution 82, sponsored by Rep. John Black, R-Marshfield, and HJR 106, sponsored by Dinkins, which are the same, would amend the Missouri Constitution and guarantee the right of hunters and anglers to hunt and fish, which opens the door for increased legal action against the commission.

"It wouldn't change anything related to us issuing hunting and fishing permits," Jefferies said. "What it may result in is a frivolous lawsuit from a poacher where the commission suspended his hunting privileges because he was poaching, and he now argues that he has the constitutional right to hunt."

As of 2020, 23 states, including the bordering states of Kansas, Arkansas, Kentucky and Tennessee, have enacted constitutional provisions guaranteeing the right to hunt and fish, most of which were passed in the last two decades.

During public hearings on the proposed amendment, many Missourians shared their support.

"In our ever-changing and progressive society, the right to hunt is essential to preserving my family's way of life," Kelly Rhoaded said in a written testimony supporting the amendment. "We hunt and fish for our food; it is a rite of passage that all of our children go through that is important for their development and self-esteem. Please protect this tradition and ratify our right to hunt and fish."

Though it garnered lots of support from Missourians, some were confused on what the amendment would actually do.

"Hunting and fishing is a core part of who I am," Daniel Zekor said in a written testimony opposing the amendment. "The bill is entirely unnecessary ... essentially creating a problem in the minds of people and then offering a solution."

The Missouri Coalition for the Environment is also opposed to the amendment.

It is "in effect, taking away the authority of MDC to be able to make sure that people aren't poaching our ecosystems," Vatterott said.

"It really doesn't do anything to recruit new hunters, provide places for people to fish, address invasive species or do anything for habitat management," Jefferies said. "It's just the feel-good, sound good sort of thing."

"I would say that citizens' right to hunt is already protected in the Constitution by the commission with its constitutional authority to protect and manage the fish, forest and wildlife of the state," he added.

The proposed amendment has moved to the House floor for debate.