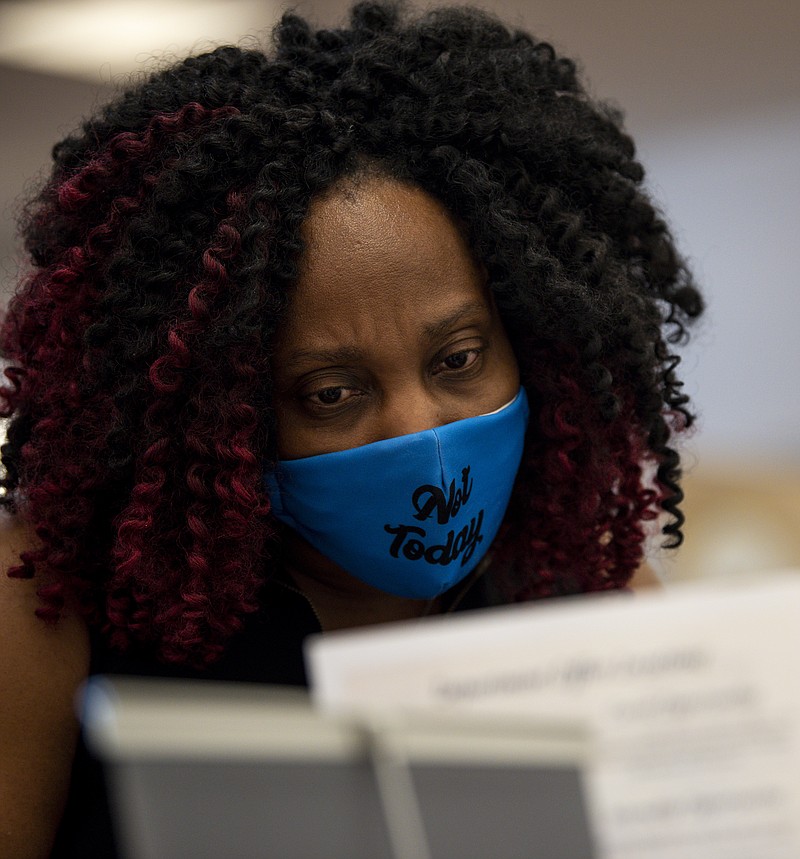 Shelly-Ann Berth looks at a pamphlet from the Missouri Department of Agriculture on Wednesday, March 16, 2022, at Capital Mall in Jefferson City. “I want to get a feel for what’s out there to apply to,” Berth said. (Elizabeth Underwood/News Tribune photo)

Hundreds of job-seekers gathered for a career fair held by state government Wednesday afternoon, with visitors and recruiters alike singing the praises of a wage increase across the state's workforce.

The career fair, held in the Capital Mall's Community Room, offered those interested in a job with the state a chance to meet with representatives from every executive department, submit their resumes and interview on site for positions.

Dawn Sweazea, director of talent acquisition with the Office of Administration (OA), said the event -- the first of its kind held by the state -- had far exceeded her expectations for a turnout, with more than 100 visitors within the first hour.

She pointed to a recent wage increase for state employees as a major milestone for recruitment in a sector with high turnover and vacancy rates.

"We know hiring right now is a huge challenge, so we just didn't know what the turnout would be like, but I'm ecstatic," Sweazea said. "I'm sure the pay increase helped get people here. Paying people what they're worth and for good work is important, and I'm so excited to see the state continue to focus on that.

"Even more than that, we're looking for people that have a servant's heart, that want to put good into their community and the world, and you can't measure what that brings back in intrinsic value," she said.

Sweazea encouraged those who could not attend Wednesday's event to visit mocareers.mo.gov, a centralized state hiring site allowing applicants to apply for any department as well as employment in the judicial and legislative branches.

"All signs point to a great opportunity to join the state of Missouri," she said.

Shana Johnson, a recruiter for the Department of Mental Health (DMH), said the event gave prospective state employees the chance to walk around and discuss what each department does and what positions they offered. She said a handful of the visitors at her table at the beginning of the event were not aware DMH existed.

The Missouri Veteran's Commission (MVC) was among the state agencies reporting the highest vacancy rates with some veterans homes running at 50 percent capacity.

"This is the biggest turnout I have seen at a hiring event in at least six months. To see that interest along with the new rates, it's exciting to see," Recruiter Michelle Johnson said.

"The applications that we've been getting since rates changed showed how effectively that's been put out, because we've seen a huge, huge increase in applications for our ancillary departments, like nursing, we've seen a huge increase," she said. "Just knowing that shows we've heard people's needs and that we're doing our best to be competitive with our competition."

Job-seekers also saw the benefit of the in-person event.

Corey Logsdan said he had spoken to recruiters from the Department of Economic Development and Conservation Department during his walk-through of the event.

"I'm trying to see what all is out there, and you don't always know what a department is really about from the website, so actually being able to talk to people and better understand what exactly they do helps me get a better idea of how I can fit in there with my skills," he said.

The career fair came amid a wealth of discussion on employment and pay rates within state government. Gov. Mike Parson requested a $15 minimum wage across the state workforce and a 5.5 percent cost of living adjustment as part of an emergency supplemental budget, citing high vacancy and turnover rates across the state sector.

The Missouri Legislature passed the bill last month, allowing departments to enact increases without establishing a set minimum wage. Parson signed off on it the same day.

The budget item could impact around 20 percent of the workforce, which made less than $15 an hour prior to the change. The bill also accounted for wage compression for those making more than $15 an hour.

State departments reported turnover rates as high as 10-100 percent and vacancies of 30-100 percent as of the end of 2021, according to the governor's office.

Another bill from local Rep. Dave Griffith, R-Jefferson City, would allow state employees to be paid biweekly rather than twice a month. That bill is awaiting action on the House floor.