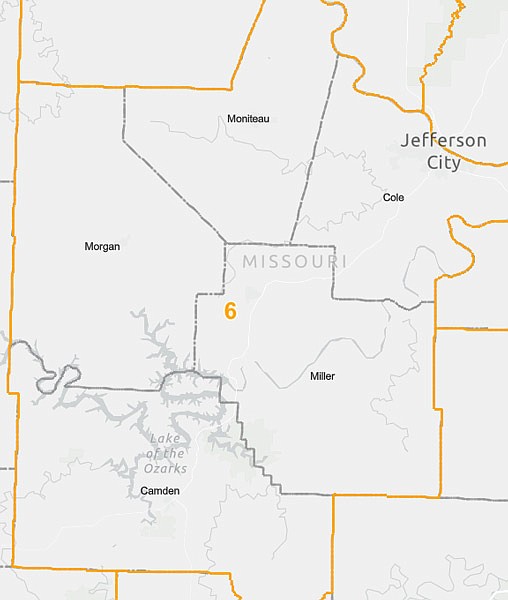 Under a tentative map created by the Judicial Redistricting Commission and submitted Tuesday to the Secretary of State's Office, the state's 6th Senate District will lose three counties and gain one new one.

Under the new map, the district would gain Camden County and lose Osage, Gasconade and Maries counties.

Osage and Gasconade counties will go to the 26th Senate District, represented by Senate President Pro Tem Dave Schatz, R-Sullivan. Schatz hasn't filed to run in the district's August primary against three other Republicans and is instead vying for the U.S. Senate seat being left by Roy Blunt.

Bernskoetter, the 6th District incumbent and only person who has filed to run for the seat in the August primary election, said he would have preferred his district stay the same, but he's excited about the opportunity to represent a new area.

Bernskoetter said it makes sense to keep Camden and Miller counties together to fully encapsulate the Lake of the Ozarks, but those counties might not have a lot in common with Moniteau County.

"I mean Cole County is probably similar, but like Moniteau -- I guess Morgan is kind of in the lake area -- but Moniteau County probably doesn't necessarily fit in with Camden County," he said. "But you've got to move things around when the population shifts."

The state redraws its House and Senate districts every 10 years based on census results. After a bipartisan group of residents failed to agree on a map, the task went to a commission of appellate judges selected by the Missouri Supreme Court.

The new map would force Bernskoetter to campaign more in Camden County, he said, but he also plans to remain active in communities throughout his district, even the counties that would drop out.

"I'll still have a connection with them," he said. "I'll still probably go to some of their events ... but I guess I officially won't represent them anymore. But in my heart, I still will."

Under the tentative map created by the Judicial Commission, the 10th District will drop from six counties to four. Audrain, Monroe and Warren counties will be removed from the district and Pike County will be added. The southern edge of the district would also take in parts of St. Charles County, including Flint Hill and Wentzville.

Riddle is not seeking re-election because of term limits, leaving the district an open contest between three Republican candidates. Rep. Travis Fitzwater, R-Holts Summit, former state Rep. Bryan Spencer, R-Wentzville, and Joshua Price, R-Mexico, are candidates vying for the seat. As it stands now, Mexico would not be in the 10th District.

The district currently includes Boone and Cooper counties, but under the new map Boone County would become its own district and Cooper County will move to the 21st Senate District represented by Sen. Denny Hoskins, R-Warrensburg.

Voters in the 19th District won't choose a new senator until 2024.