Leader on and off the court 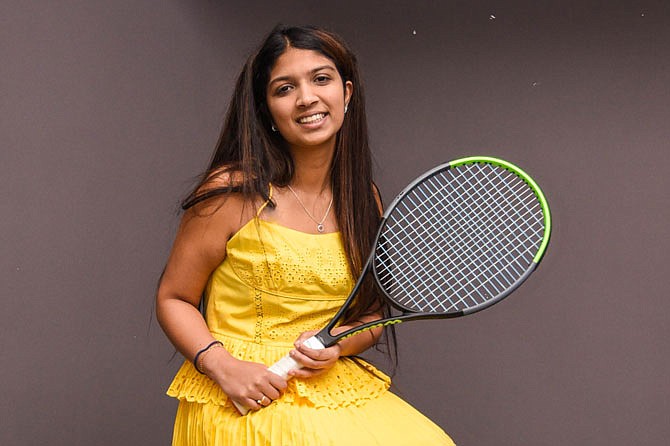 Whether playing tennis, involved in a community project, practicing cultural dance or attending one of her many club meetings at Jefferson City High School, the high school senior likely won’t be found binge-watching much on Netflix these days.

“I’ve learned over the last couple of years that without having an occupied schedule, you’re just losing on opportunities,” she said. “I’ve learned there’s always more that I can do. I just want to keep going. I think the pandemic had a lot to do with that, too; I took for granted all that I had and being able to go out and do things.”

A big chunk of that busy schedule is filled with tennis. 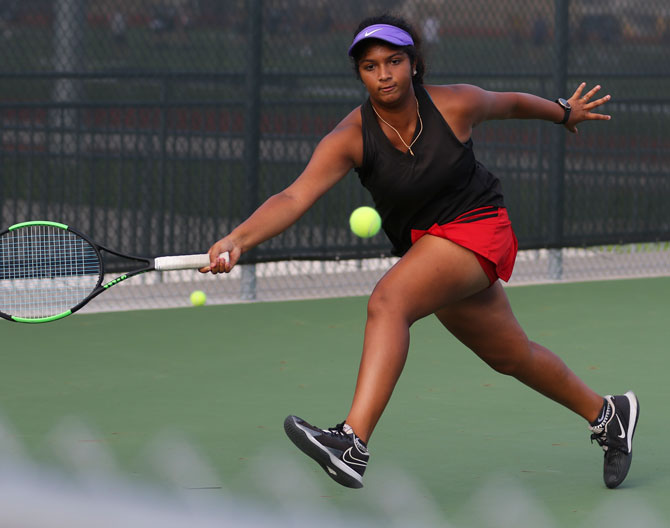 Sandhiya started playing more than a decade ago, training under numerous coaches in Mid-Missouri and commuting to Columbia several days a week after school to practice. She now excels on her high school team as well as through the United States Tennis Association where she plays year round in traveling tournaments.

Her accolades speak for themselves: Sandhiya has been the No. 1 singles player on her high school team since her freshman year, winning two district titles; has gone to the state tournament the last three years and placed fourth this year, becoming the first Lady Jay to win a singles state medal in 26 years; won her first 30 singles matches this year; and was chosen by Sports Locker Magazine as a 2021 Capital Region Medical Center Player of the Year.

Sandhiya has also taught tennis to children during the summer through the YMCA in Jefferson City and a country club in Columbia.

“I realized after doing that that I like teaching kids, and we have a good bond,” she said. “I was initially teachings 3- to 4-year-olds and then middle school students. I learned there’s potential for everyone — but that was in Columbia — and I come here and see that there’s not that many coaches, and that’s kind of the position I was in growing up.”

In true Sandhiya fashion, she took matters into her own hands and started her own tennis academy last summer in Jefferson City to make sure aspiring tennis players had a place to learn that didn’t involve so much car time.

Mostly by word of mouth through her family and others who associated the name Sandhiya Baskar with tennis excellence, her roster of 5- to 13-year-olds grew to 16 by the end of the season, and she intends to resume the academy this coming summer as well.

It’s not all for the glory, though; Sandhiya donated 50 percent of the profits from her business to the Central Missouri Food Bank, an organization close to her heart and her heritage.

Sandhiya’s Indian culture is a big part of who she is, she said, noting she’s traveled to India multiple times to visit friends and family and absorb more of her culture. Through a community in Jefferson City and Columbia, Sandhiya has found ways to celebrate her culture closer to home.

The Baskar family participates each January in Pongal Sankranti, which is a multi-day Hindu harvest festival that marks the end of the winter solstice and start of a new prosperous season. The annual celebration in Columbia is complete with lots of food and performances, but beyond the merriment, there’s also a charitable component.

“Since it’s the new harvest and the start of a new beginning (in India), we have the food bank as a way to give back to our local community,” Sandhiya said.

She became involved with the initiative five years ago, almost immediately taking a leadership position as a seventh-grader calling businesses and community members soliciting donations.

“I like to be interactive with my community in a lot of ways. We’re not in a very big town, but it’s not a small town either — so I feel like there are opportunities, but they come with a lot of limitations,” she said.

Most previous years, the Pongal Sankranti Food Bank Committee raised around $1,000, but with 2020 as the 25th anniversary for the local festival, the goal was increased to $25,000, which was met thanks to a donor matching contributions.

For the last two years, the festival has been held virtually due to COVID-19, and the fundraiser switched to an online format. Sandhiya served as the marketing coordinator for the online initiative, which raised around $8,000 over the last 12-18 months.

“Doing it made me realize I was capable ... and my success within that is just another aspect of me I didn’t know I had,” she said.

In addition to taking a higher leadership role in the fundraiser, Sandhiya also performed for the first time in the 2022 event, showcasing classical Indian dance, which is an art form she began learning virtually during the pandemic.

Back at JCHS, Sandhiya serves as the vice president of the National Honor Society and is involved in Diversity Club, which was a school board initiative aimed at lessening discrimination and expanding cultural awareness district wide.

With her senior tennis season and the year’s Pongal Festival now behind her, Sandhiya is setting her sites on future endeavors. She has applied for colleges across the country and is currently undecided.

The young leader does know she wants to major in business, though, with hopes of being a CEO in the future — her experience with the tennis academy and food bank fundraiser are proof her dreams are achievable.

She’d like to own her own beauty product line one day, gearing makeup products toward her specific race and skin tone.

“I know I can pull off a good leadership role, and that’s something I’ve been passionate about.”