In tune with community 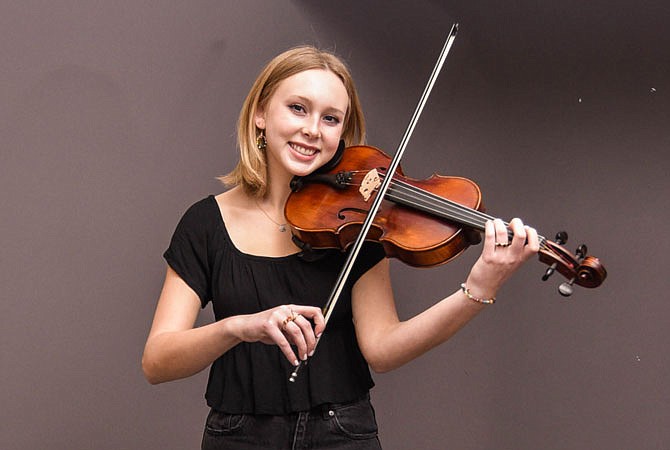 Dahlia Penserum sees herself as the shy kid.

Her list of involvements say otherwise, though she’s hesitant to give herself too much credit.

Not all leaders crave the spotlight.

The Capital City High School senior has been a key player in growing the school’s tennis program, is active in orchestra, created her own jewelry-making business and is one of the primary caregivers for her mom who is battling breast cancer. 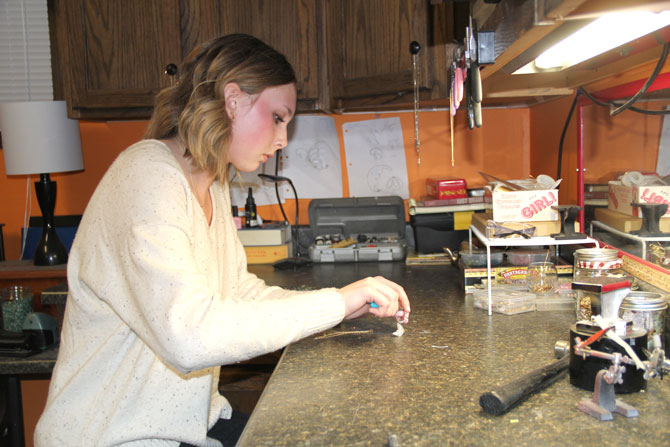 Dahlia Penserum makes jewelry in her basement to sell through her Instagram page, @wireandresinbydp.
By Molly Morris

“I’ve always been really quiet. Then the more people I get to know, the more people who are interested in me and the stuff I’m doing,” she said. “I still have to talk to people I usually wouldn’t talk to. It would have never happened if there weren’t those people who pushed me.”

Dahlia comes from a legacy Jefferson City High School family — her two older sisters graduated from there and her parents were Jaybird sweethearts. So when the new high school was built and boundary line changes placed her at CCHS after her freshman year at what was then Simonsen 9th Grade Center, it was not what she expected from her high school experience — starting with tennis.

When she was 8 or 9 years old, Dahlia began playing tennis with her grandpa every Sunday morning at the YMCA, a tradition they still uphold. Eventually, she started taking lessons at the country club.

“I’m not gifted athletically — I’m going to be completely honest — but I put in a lot of work at it,” she said, adding she became No. 1 varsity at the new high school her sophomore year. “I would have never gotten to improve if I hadn’t gone to CC.”

Knowing she had some experience on the court, the tennis coach asked her to help build and lead the team, which at its beginning, only had eight or so players with very little experience, Dahlia said.

“So I did,” she added, mentioning recruiting other students to join the team, some of whom were new to the sport. “I came out of my shell and tried to be the best leader I could. … For a while there, I felt kind of forced into running a team, but I ended up really enjoying being a leader and having a family away from home.”

Despite her leader status, though, Dahlia prefers to play doubles, enjoying the community aspect of playing alongside a teammate, which is also what she loves about orchestra.

Coming from a musical family, she knew picking an instrument was inevitable. She chose the viola, partly because it was different than the violin and cello her mom and sisters play but also because it’s not typically a solo instrument.

“I love being a member of the orchestra. … I’m so scared to play in a small group,” she said. “I’m so used to being in this huge beautiful orchestra and listening to every part and knowing where my part goes in. I don’t like playing alone; I like that group setting.”

Through the group setting, Dahlia has also been involved in various community fundraisers, like performing as a thank you to health care workers at St. Mary’s Hospital and making apple pies as a fundraiser at Hy-Vee.

“It feels good to not only be a part of a charity but to be a part of a group of people. … I love to go out and do stuff with my orchestra family,” she said. “If I had not joined orchestra, my life would be completely different in some odd way.”

What started as a desire to replicate a pair of earrings she liked at age 14, turned into a small business, Dahlia’s Wire & Resin, found on Instagram at @wireandresinbydp.

Over the years, she acquired tools and more supplies to grow her collection, which includes pieces with beads, pressed flowers and crystals, and she even taught classes during the summer with Capital Arts. When time allows, Dahlia will spend hours on end creating from her workspace in the family basement. Time, though, is not something she’s had much of lately.

Less than a year after having a double mastectomy due to stage 1 breast cancer, Dahlia’s mom was rediagnosed in June 2021 and is nearing completion of her chemotherapy and radiation treatments, which recently kept her in St. Louis for an entire month. Family members took turns staying a week at a time with her at the American Cancer Society Hope Lodge.

With her two older sisters away at college, Dahlia and her dad took on caregiver roles — all the while, she was remaining active in tennis, orchestra and through her job at Madison’s Cafe.

“It has been hard, but in some ways, it’s brought us closer,” she said, noting the guilt she felt going to away tennis matches during the start of her mom’s chemo treatments in the fall.

Once things slow down, she hopes to get back in a jewelry-making routine and create breast cancer awareness bracelets to sell as a fundraiser for cancer research. And with her high school days winding down, Dahlia is starting to look toward the future. She plans to attend the University of Missouri in Columbia and is undecided on her major.

“It’s very important to me to know a lot of people,” Dahlia said. “It makes me feel involved and included. I was born and raised in Jefferson City so I know a lot of Jeff City people so I’m scared to go to Columbia because I don’t have that community there.”

Dahlia looks to restart that community  30 miles north through her tennis and music interests, though she’s unsure how. Either way, Sunday morning tennis dates will continue with Grandpa back home.