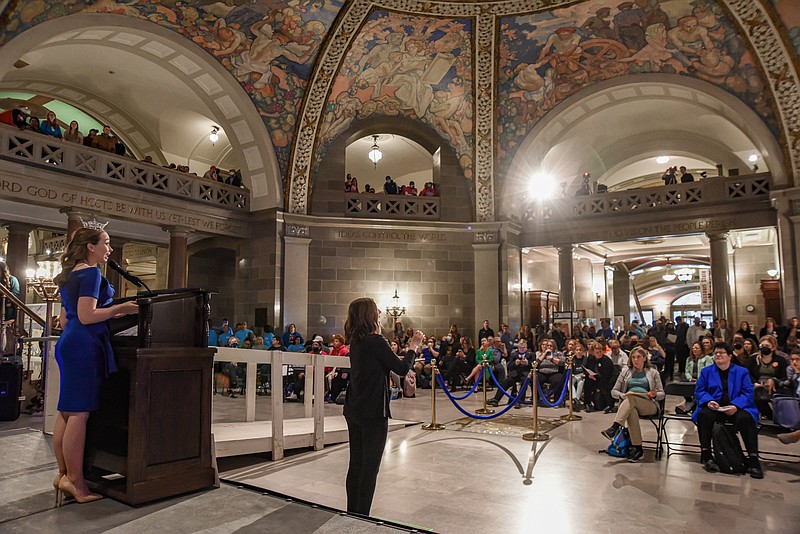 Using her position as Miss Missouri, Callie Cox addressed the large crowd Wednesday in the Capitol Rotunda to talk about the need of services for disabled Missourians and to protect the rights they have in order to be as independent as possible. Following her term as Miss Missouri, Cox said she hopes to open some sort of business that can utilize the skills of disabled individuals to offer a setting of inclusion. (Julie Smith/News Tribune)

Although the rally has historically been held in person, this year’s event was a hybrid, combining in-person efforts with YouTube- streamed coverage, event organizer Mark Satterwhite said. Participants from across the state attended Wednesday’s event.

Listeners at the Capitol, and those who chose the streamed option, all got to hear comments from Gov. Mike Parson, State Treasurer Scott Fitzpatrick, State Attorney General Eric Schmitt and numerous lawmakers.

Patty Goss said she wanted them to know “how important consumer services are and how I would be lost without my service — my helpers.”

Goss, of Springfield, said she’s attended about 15 consecutive rallies. She is vice president of People First in Missouri, an organization people with developmental and cognitive disabilities operate. Its aim is to encourage members to help each other, help other members develop self-advocacy and leadership, and to improve self- determination skills. Her goal on Tuesday, Goss said, was to encourage representatives and senators to support programs.

The organization emphasizes members exercise rights, such as voting, she said. Responsibility comes with those basic rights.

Goss lives independently and said she’s proud to tell people in about 2½ years, she’ll own her own home in Springfield.

He said participants in the rally are included in workforce development in Missouri. Parson said a young member of his family is on the autism spectrum, and first lady Teresa Parson has advocated on behalf of people with autism.

Autism is a bio-neurological developmental disability that generally appears before age 3, according to the National Autism Association. It can affect normal development of the brain in areas of social interaction, communication skills and cognitive function.

A significant problem, his family learned, is autism isn’t recognized until it is almost too late to intervene.

“We wanted to change that,” Parson said. “And make sure that we were trying to diagnose (autism) at a very early age.”

That’s why Missouri included $4.2 million in the state budget to help analyze and diagnose the disability, he continued.

He told listeners his proposed budget for the next fiscal year includes $60 million to provide resources and support for Missourians with developmental and behavioral disabilities.

The governor said he often visits facilities where folks deal with disabilities. And he learns something new about challenges every day.

“One thing I think I’ve learned in my time as governor, I’m not sure I like the term disability,” Parson said. “I think it’s more about your abilities.”

The annual rally represents an important day for Missouri each year, Fitzpatrick said. He said he’s a dad of twin boys who each have received diagnoses of severe autism.

“I know how important it is to educate people on the challenges that individuals with disabilities face,” he said. “There was a time when I was in the Legislature before I had my sons when I had no idea.”

He thanked the governor for supporting increased funding for autism centers, which allowed more access for children and eliminated wait lists.

“That’s going to be incredibly important for the youth in our state — to get early intervention, and to be more accessible,” Fitzpatrick said.

Another important step the state has taken was to implement the MO ABLE program, which is Missouri’s form of the federal Achieving a Better Life Experience Act. The act allows the state to offer investment accounts for eligible individuals with disabilities, according to moable.com. It allows people with disabilities to save and invest money without losing eligibility for certain public benefits programs, like MO HealthNet (the Missouri Medicaid program) or Social Security.