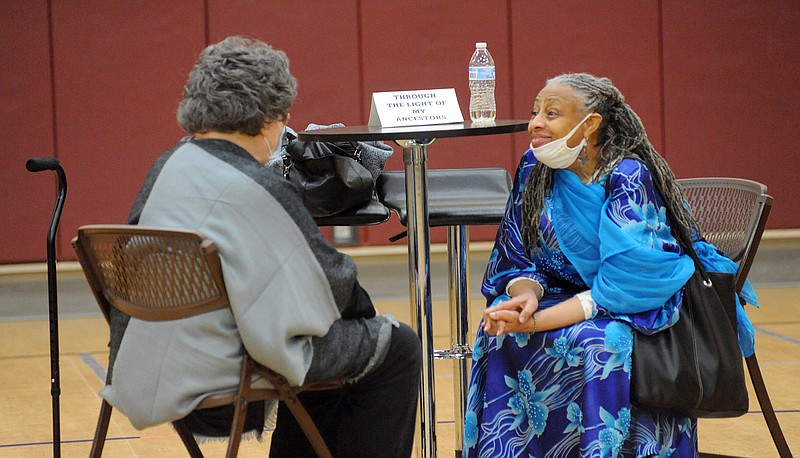 Eight women and a man sat in the basement of a downtown Jefferson City church Monday afternoon, preparing to share their stories with strangers.

Some were eager to do so.

Others were anxious about the prospect.

“When I was 13, I was sexually abused by my youth pastor,” Candice Thomas offered. “From there, I kind of got lost in drugs and prostitution.”

Thomas said she has four children, for whom she doesn’t have custody, but anticipates gaining custody of this summer.

“I am two years sober,” she said, drawing applause from the other “books” in the room.

For about 20 minutes, they were allowed to “check out” the human books — people who have experienced difficult challenges.

Talking Books provided readers opportunities to check out a human book (for about 20 minutes) and have an open dialogue, challenge stereotypes, ask questions about difficult issues and “unjudge” someone in a safe space.

The books were available for about three hours. Each book selected his or her own title.

“I went from a stay-at-home mom to selling and abusing both drugs and my body,” she wrote in the description of her book. “I was in and out of jail and living on the street until I was given the option of either prison or a faith-based sober living house. I chose the sober living house and learned to live again.”

She now works at Landmark Recovery Center in Jefferson City, and helps people find their road to recovery and resources that change their lives, she said.

Mentha’Munirah Bolton-Bakari titled her story “Thru the Light of My Ancestors.”

“I was 5 years old with my first experience of racism,” Bolton-Bakari said. “I talk about the various experiences I’ve had along those lines. I talk about how I use my ancestors to work with it.”

She uses herself to build a foundation for young people, Bolton-Bakari said.

Her experiences have been many, she said, and always surround social issues. She’s witnessed racism and teen pregnancy.

Kennysha Harrison said she used poetry to help her get through her trials and tribulations as a child, and described herself as the book “Silenced Tears.”

Harrison grew up in Chicago. Her mother was on drugs, she said, and authorities placed her and siblings in foster care.

She was 4 when her father received custody of her.

Her three stepbrothers molested her. Afterward, they beat her badly enough, she almost died and paramedics had to fly her to a hospital.

“That’s where everything came out,”

Harrison said. “I was silenced at the time, scared to speak out or tell anybody about the abuse. Being young and naive — they said they’d kill my whole family if I ever told somebody. So, that was part of my silence.

“That’s part of my poem today — getting through that.”

Tricia Roberts grew up in the Missouri Bootheel.

“My mom smoked crack cocaine with me when I was 10 years old,” she told the other books. “My life was pretty much around drugs and prostitution and homelessness.”

A family member molested her too. But, she was afraid to tell anybody because he was in law enforcement.

“I thought that they wouldn’t believe me. My life spiraled downhill — from being a stripper, to being a prostitute, to being homeless, to being in prison,” Roberts said.

Roberts had three children when she was still in high school. She was about 29 when her husband was murdered in a drug deal. She was 30 when she went to prison.

“I spent a year there,” Roberts said. “I stayed another year as a house manager and became a program coordinator, where I still work today — helping other women.”