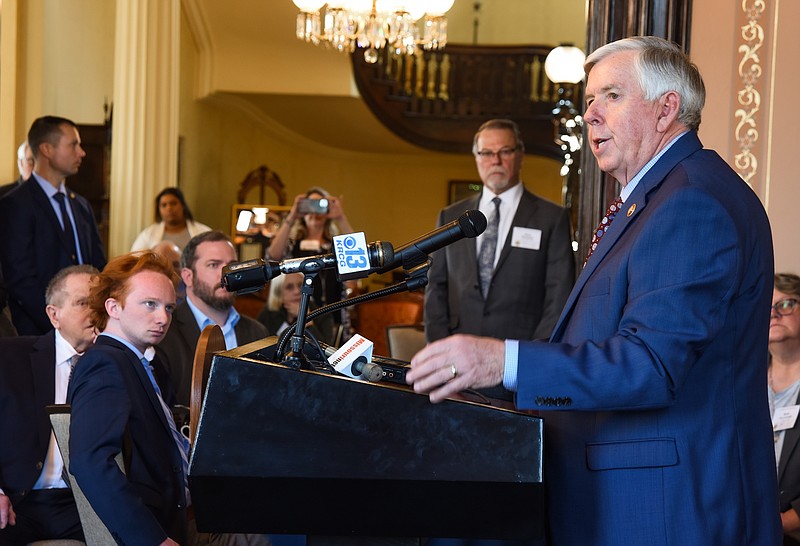 Gov. Mike Parson talks to the media following Day at the Capitol activities, which traditionally include a lunch hosted by the Missouri Press Association in the Governor's Mansion.

The role of the media is powerful, elected officials said Thursday, and it's not always aligned with the interests of politicians.

Media professionals from across the state gathered Thursday in the Capital City for the annual Missouri Press Association's Day at the Capitol.

Elected officials talked about the importance of working with members of the press to share accurate stories and arm the public with the information it needs to be active and engaged.

After hearing from state officials in the Senate Lounge, members of the press attended a luncheon at the Governor's Mansion and heard from Gov. Mike Parson.

The governor recounted some of his experiences working with local media during his time as Polk County sheriff and growing up with a local weekly newspaper in Wheatland.

"It was on Wednesday when you got the paper and everybody looked in there and read that thing almost cover to cover," he said.

It's a different picture than the one House Majority Floor Leader Dean Plocher, R-St. Louis County, painted of the role of media now.

Plocher said the prevalence of misinformation on social media has put a greater responsibility on the media to do thorough research and report with accuracy while still being timely.

"Just because you read it on Twitter or social media, doesn't mean it's true," he said. "So your jobs are that much more difficult because of the salacious reporting that other people prey upon with social media."

Although formats have changed, the media's objective remains the same, which is to accurately report the truth. The elected officials said they would work to support those efforts and be transparent with the public.

Parson said he doesn't always share the same philosophies with members of the press, but it's a shared effort to inform the public.

"I've always been a supporter, even with everything that goes on sometimes and things that are said in the political arena, I've always been supportive of local papers and the press association my entire career," Parson said.

He said he sees value in being transparent and openly fixing issues if they appear.

Upon assuming the role of governor after Eric Greitens resigned, Parson said he worked with his communications team to make the Governor's Office more transparent and responsive to reporters.

"We've truly tried hard to make sure we open up lines of communication," he said. "I think it's very important for people in elected positions who are truly public servants to be transparent."

Parson said he faced an unprecedented drought, flood and pandemic while in office, which has put him in situations where no one had readily available solutions. His focus has been on helping Missourians, he said, which means being transparent.

Parson said he held 150 news conferences during the height of the COVID-19 pandemic.

Despite those efforts, Parson said Missourians received mixed messages about the pandemic and the virus was quickly politicized.

That can't happen if the state hopes to move forward, Parson said.

"I've always said the media plays an important role in where this state goes, whether we move forward or we don't," he said.

In his remaining three years as governor, Parson said he wants to focus on improving education opportunities for children and the condition of the state for future generations.

That mission, he said, requires members of the press to effectively communicate developments to their communities.

Parson said it's impossible for him to control what happens in every corner of the state or with every area of state government.

Parson's comments were quickly put to the test as he fielded questions from reporters after his remarks.

When asked if Missouri journalists should be concerned about being prosecuted for doing their job, Parson said yes, if they take "private information."

Last October, Parson called for the criminal prosecution of a St. Louis Post-Dispatch reporter who found a security flaw that exposed the Social Security numbers of teachers, counselors and administrators in the HTML code of a state website.

HTML code can be accessed by right-clicking on a website.

The newspaper delayed publishing its story -- which didn't contain any Social Security numbers -- until the security flaw was fixed and notified the state of what it found. Parson labeled the reporter a hacker and initiated an investigation with the Missouri Highway Patrol.

Parson said Thursday he doesn't believe anyone has a right to take private information from a publicly accessible website, and he doesn't understand why anyone would.

He said he won't be apologizing to the Post-Dispatch reporter.