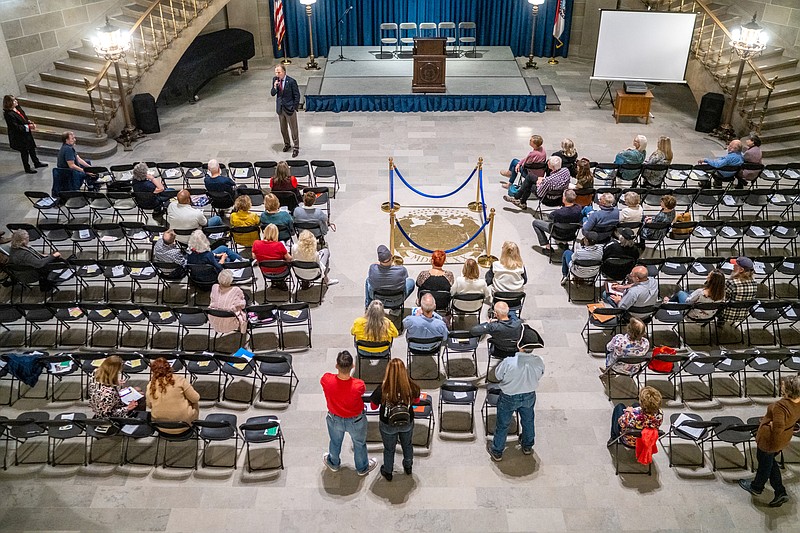 Representatives from the League of Women Voters of Missouri and AARP, as well as a man from Buchanan County, spoke against legislation that would require voters to present an unexpired photo ID to vote, among a host of other election reforms.

SB 679, sponsored by Sen. Tony Luetkemeyer, R-Parkville, contains many of the same provisions as White's bill, including a move to paper ballots by 2024, additional oversight on absentee voting and the photo ID requirement.

Missouri allows voters to present eight different forms of ID to vote, including student IDs, utility bills and any other government document that contains the name and address of the voter.

The two Senate bills require voters to show a photo ID that hasn't expired -- such as an active driver's license, nondriver's license or military ID. Voters without a valid ID could complete a provisional ballot, but would be required to return to their local election authority with an acceptable form of ID for their vote to count.

Ashcroft, the state's top election official, has been a vocal proponent of adopting photo ID requirements for voting.

"We're very excited that voter ID is in this particular bill," Vincent said.

Marilyn McLeod, president of the League of Women Voters of Missouri, said the ID changes are unnecessary and burdensome to voters.

"We really need to be doing more for our people to get them to vote than try to restrict them," McLeod said.

She said the proposed change could have a chilling effect on voter participation throughout the state because too many factors in Missouri's system of bureaucracy could lead to disruptions in people's ability to vote.

A young adult who is old enough to vote but doesn't drive, for example, would face a new obstacle of being required to get a nondriver's license to vote, she said. Under current law, that individual could use a piece of mail or a school ID instead.

Ron Berry, a representative from AARP, an interest group centered around issues affecting older Americans, said many senior citizens don't have a current driver's license and have a more difficult time acquiring one than average citizens.

He also expressed concern about a provision in the bill that would delete language outlining a process for the Secretary of State's Office to notify voters about election changes.

"You've got major changes here that says I can only come in and vote with this (photo ID)," Berry said. "If I didn't know that and I didn't get a notification about it, you're going to have some people that are going to be confused when they go to the polls."

Luetkemeyer, a bill sponsor, said the state has a strong record of election integrity and he wants to see that continue under the proposed reforms.

"It is imperative that voters be able to establish their ID before casting a ballot," he said. "It's only logical that we would need to prove who we are before voting."

Excluding the Secretary of State's Office, Opportunity Solutions Project, a Florida-based nonprofit, was the only testimony in support of the bills.

SB 670 also prevents election tabulating machines that automatically count votes from being connected to an internet network and prevents changes to election laws, rules and regulations for six months before an election.

It would also allow the Secretary of State to audit voter registration records and withhold funding to local election authorities for not maintaining them.