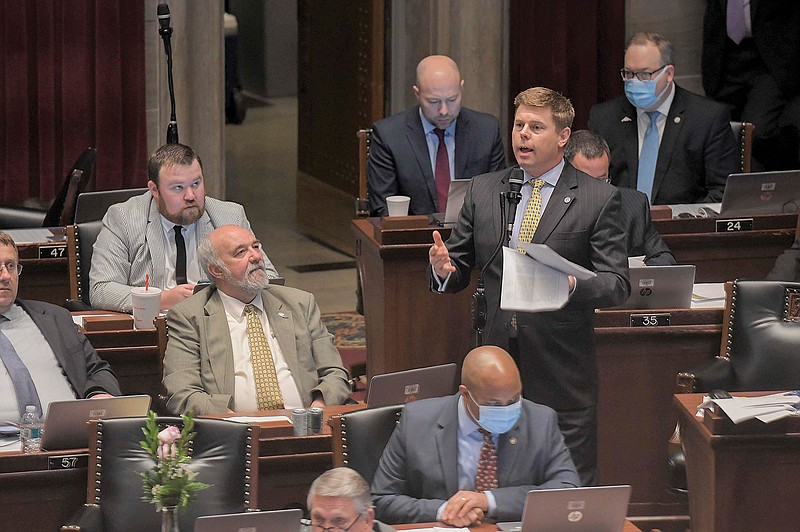 Missouri is cutting economic ties with Russia and encouraging retailers in the state to do the same.

The restrictions are the latest development in the sanctions the United States and its European allies have leveled against Russia after it began its invasion of Ukraine on Feb. 24.

"Vlademir Putin and his ideas of what he's doing with his Russian military do not match Missouri's ideas," Kehoe said. "They do not match the American way of freedom and liberty, and giving these people a chance, as they were, living in peace and being productive citizens of Ukraine."

Kehoe said the initiative is a symbolic show of support for Ukraine, but as more states employ similar efforts it could lead to additional action in Washington, D.C.

Plocher said he's unsure how much in public funds are tied up in contracts with Russia, but he wanted to file the bill before the March 1 deadline for introducing legislation.

Even if passed quickly, the restrictions won't take effect until Aug. 28.

"We're doing everything we can with resources that we have and laws that we have in the state of Missouri to affect what's going on over there and show support for the people," Plocher said.

More immediately, the lieutenant governor's office is working with retail associations and various distributors across the state to pull Russian-made and branded products from their stores and replace them with American-made or Missouri-made products.

Columbia liquor store Macadoodles announced Wednesday it would stop selling Russian products, and global brands such as Ford and Apple have announced they are ceasing operations in Russia.

"Even if it's a single small sale, it still is a symbol of faith and hope to Ukrainians that we stand with you," Kehoe said. "We might not be standing next to you, but we will stand with you."

Russia is within the top 11 percent of American import trading partners in 2019, according to the Office of the US Trade Representative. Mineral fuels, precious metal and stone, iron and steel, fertilizers and inorganic chemicals are Russia's largest imports to the United States.

Kehoe said a lot of Russian consumables, such as vodka and spirits, are sold in Missouri.

Members of the state House and Senate have also filed resolutions encouraging President Joe Biden to provide intelligence and troops to Ukraine, as well as unrestricted weapons and supplies.

The resolutions also call for Biden to reconvene the Group of Seven nations (G7) to impose heavier economic sanctions against Russia and establish energy independence from Russia.

The "Missouri Stands with Ukraine" initiative came a day after Biden's State of the Union address, in which he vowed to maintain the Western alliance working to cripple the Russian economy with sanctions.

And on Tuesday, state Treasurer Scott Fitzpatrick called for the Missouri State Employee Retirement System to divest the millions of dollars it has in Russian holdings and asked for a meeting to discuss ways to prevent future purchases of Russian securities.

Fitzpatrick is encouraging other pension funds to sell their Russian investments as well.