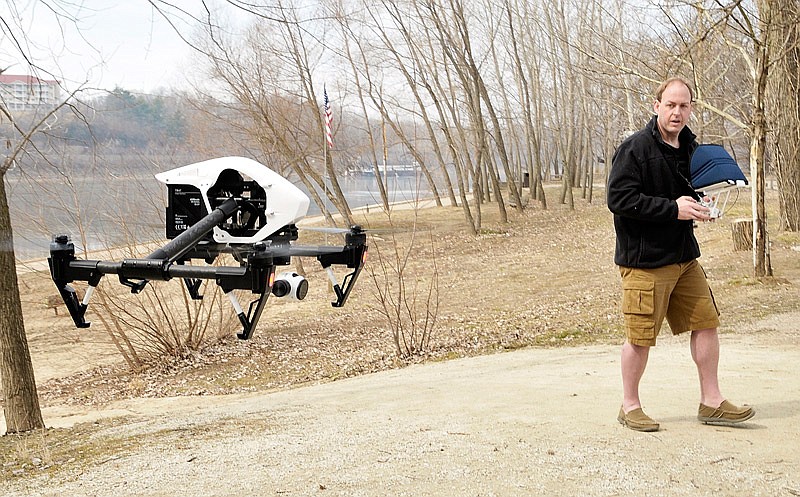 In this March 12, 2015 file photo, James O'Guinn observes the screen and the equipment as he flies a DJI Inspire drone over the Missouri River at the Noren Access in north Jefferson City.

A bill that would make it illegal for drones to film and photograph a person or their private property was debated for nearly two hours in the House on Tuesday.

House Bill 1619, which is sponsored by Rep. Dean Van Schoiack, R-Savannah, would expand private property rights by forbidding people from using drones to "photograph, film, videotape, create an image, or livestream another person or personal property of another person."

"People can't just walk over your fence, and they can't just willy-nilly walk across your backyard for no good reason," Van Schoiack said. "So the drone bill came up as an idea of mine to further the property rights for the people."

People could be charged with misdemeanors for taking images with drones and felonies for distributing them.

The bill was met with pushback from other lawmakers. Rep. Michael Burton, D-Lakeshire, argued against the bill on the floor because he said it was unenforceable due to federal law.

"Congress has provided the FAA with exclusive authority to regulate aviation safety, the efficiency of the navigable airspace, and air traffic control, among other things," Burton quoted from a Federal Aviation Administration statement. "State and local governments are not permitted to regulate any type of aircraft operations."

Federal airspace law establishes individuals cannot privately own airspace, according to a guide from the National Association of Mutual Insurance Companies. All airspace above the ground is regulated by the Federal Aviation Administration.

In general, civil drone pilots typically fly drones from the surface level to a maximum of 400 feet. According to the FAA, this fits into public airspace. Any unmanned aircraft higher than that altitude must follow the laws and regulations of air traffic control depending on the location of where the remote pilots are flying their unmanned aircraft.

Debate on the bill was suspended after several lawmakers brought up points on the House floor not discussed in committee, such as defining what constitutes private property in the air and the logistics of passing a law in line with federal regulation. While debate could be picked up again in the legislative session, Van Schoiack said that it may take time to make necessary adjustments to the bill.

"This is a slow process. It's for good reason," Van Schoiack said. "I don't want a bad law here. I want a really good law that will do something to help protect people's rights."