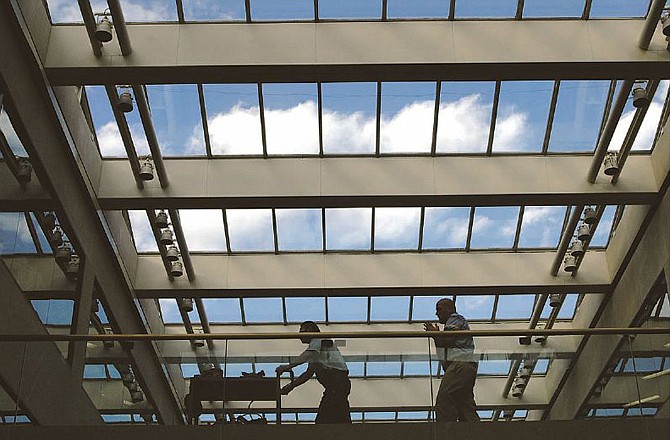 In this file photo, workers cross a seventh-floor walkway under a bright blue sky Tuesday morning, Nov. 10, 2011, in the atrium of the Harry S Truman State Office Building in Jefferson City.

As the U.S. and other governments cut economic ties with Russia over its invasion of Ukraine, the Missouri State Employee Retirement System (MOSERS) will consider doing the same.

Missouri Treasurer Scott Fitzpatrick on Tuesday called on Executive Director Ronda Stegmann to convene a special meeting of the MOSERS board of trustees as soon as possible. Fitzpatrick hoped to discuss the prevention of future purchases of Russian securities and ways to strategically divest existing Russian holdings.

A spokeswoman for MOSERS said a special board meeting will be Thursday afternoon to discuss the issue.

She said the system used external fund managers rather than directly investing in non-U.S. securities. She said MOSERS had around $9 million of indirect Russian exposure, accounting for around 0.07 percent of MOSERS' total $13 billion portfolio exposure.

"Vladimir Putin is a madman, and it's time for the world to cut him off. In Missouri, that starts with MOSERS," Fitzpatrick, who sits on the board, said in a statement. "When he is isolated and alone, Ukrainians and Russians will have their countries back. Missouri stands with the Ukrainian people."

The board is made up of lawmakers, financial professionals, gubernatorial appointees and the commissioner of the Office of Administration alongside the state treasurer.

Senate Minority Floor Leader Sen. John Rizzo, D-Independence, is one of the lawmakers who sits on the board. He noted his party had pushed for the state to cut economic ties with Russia through legislation several years ago.

"So long as the tyrant Putin is in power, Missouri should cut its financial ties with his murderous regime," Rizzo said in a statement. "In 2017, a Democratic bill was put forward to divest Missouri's assets from Russia, and I'm pleased to see there is now bipartisan interest in this effort."

The 2017 bill would have prohibited state and local governments from investing in or contracting with entities doing business with Russia or its occupied territories. That bill did not make it far enough in the legislative process to receive a committee hearing.

The board's next regular meeting is scheduled for April 22.

Missouri is the latest state to consider halting and redistributing Russian investments; Pennsylvania, Georgia, Maryland and Kansas are among the states considering similar moves. California lawmakers are considering legislation that would require the state's public employee and educator retirement systems to eliminate its Russia-related investments, according to the Los Angeles Times.

Russia began its invasion of Ukraine last week, prompting economic backlash from governments across the globe. The U.S. has leveled sanctions on Russian officials, banks and companies over the past week.

Jefferson City's representation in the U.S. House of Representatives pushed for an even broader national economic response this week: Congressman Blaine Luetkemeyer, a Republican representing Missouri's 3rd District, called on the Biden administration to fully isolate Russia from international markets in the wake of its attack.

Luetkemeyer, who serves as ranking member on the Consumer Protection and Financial Institutions Subcommittee, said the move would make clear America's intentions do not tolerate further aggression.

"The Administration and our allies must immediately put in place the harshest sanctions possible, including full removal from the global payments messaging system, and completely isolate Russia and Putin from international markets," Luetkemeyer said in a statement. "We must also take meaningful steps to end our dependence on tyrants and dictators for critical resources."

Luetkemeyer said the U.S. was slated to import 12 million barrels of Russian oil this month.

Other Missouri delegates in Washington, D.C., have called for economic sanctions.