Parson selects acting DHSS director from within the department 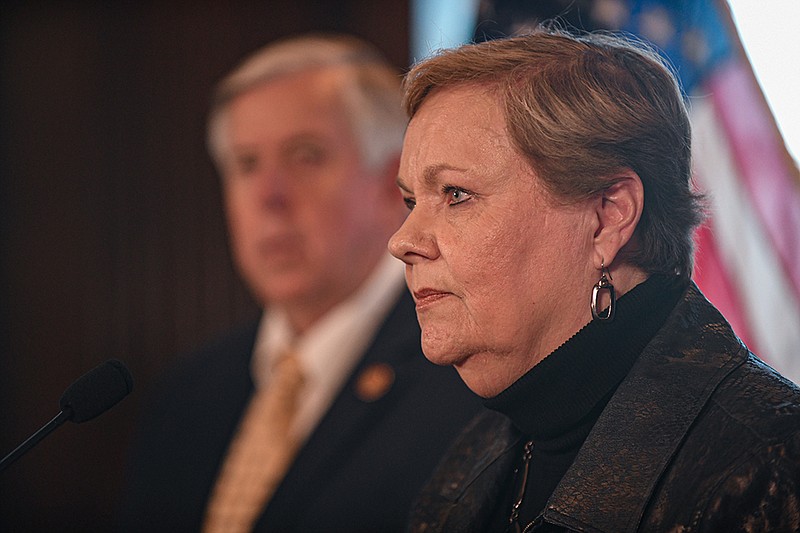 Gov. Mike Parson stands in the background as Paula Nickelson addresses the media Tuesday after being named as acting director of the Missouri Division of Health and Senior Services by Parson during a press conference in his office at the Missouri state Capitol in Jefferson City. Nickelson, of Fulton, has worked with emergent issues in her 22 years with DHSS. (Julie Smith/For the FULTON SUN)

JEFFERSON CITY, Mo. -- Paula Nickelson said she was interested in assuring the state's public health system did not falter after the Missouri Senate refused to confirm Gov. Mike Parson's nomination for director of the Department of Health and Senior Services.

Parson tapped Nickelson, a 22-year DHSS employee from Fulton who is the department's deputy director, as the acting director Tuesday afternoon.

A native Missourian, she takes the reins of a department that has seen five changes in leadership since the April resignation of Randall Williams.

Following Williams' departure, Parson made his deputy chief of staff, Robert Knodell, the interim director of the department. He then nominated Don Kauerauf for the position in July.

On Feb. 1, the Missouri Senate refused to confirm Kauerauf for the position. Kauerauf later resigned that day and can never hold the position again. Following his resignation, Parson appointed Richard Moore, general counsel for the department, to act as interim director.

Parson described the events surrounding Kauerauf's departure as disgraceful, wrong and embarrassing to the state. The governor and others decried misinformation floating about on social media stating Kauerauf supported mandates, despite Kauerauf's adamant arguments he was against mask and vaccination mandates.

Parson said Tuesday afternoon he named Moore interim director because there was so much going on surrounding the department on "the legal front."

During her introduction, Nickelson said government and public health should be transparent.

"We will work very hard at communications strategies with all of our partners, as well as the public, to assure that the public understands what's going on with public health," she said.

None of us have ever experienced a pandemic before, nor did we know what to expect, she said.

We didn't know how it would modify relationships and cause periods of distress.

"We were all learning about it, as we had to pivot often," she said.

It caused periods in which officials questioned what was the best information.

Parson acknowledged naming Nickelson as acting director prevented him from having to put her through the confirmation process, but he denied that was the intent.

Parson said he simply wanted to create stability within the department.

"We weren't expecting what happened in the Senate with Don when he went up there, but it did."

Parson said he looks at the reality of his situation -- he can only serve three more years as governor. At this point in his administration, it makes sense to bring in somebody from Missouri, who wouldn't have to relocate for such a brief period.

"It's very difficult to recruit right now, to bring people into the cabinet when you're at that short of a term. And expecting them to move from out of state," he said.

Opportunities come when you don't expect them, Parson said.

And he considers Nickelson the director of public health.

She is to be considered part of the governor's cabinet moving forward, he continued.

"As acting director, I am committed to enhancing our collaborative work with our local public health partners ... and behavioral health partners and all community partners," Nickelson said.

Nickelson said she wants the department to focus its efforts on the leading causes of morbidity and mortality in the state, while emphasizing health equity.

Paula Nickelson is the new acting director of the Missouri Department of Health and Senior Services.

Nickelson, a native Missourian, has been in the department for more than 22 years.

She takes the reins of a department that has gone without permanent leadership since the April resignation of Randall Williams.

Governor Mike Parson made his deputy chief of staff, Robert Knodell, the interim director of the department. He nominated Don Kauerauf for the position in July.

On Feb. 1, the Missouri Senate refused to confirm Kauerauf for the position. Kauerauf later that day resigned from the position, which he can never hold again.