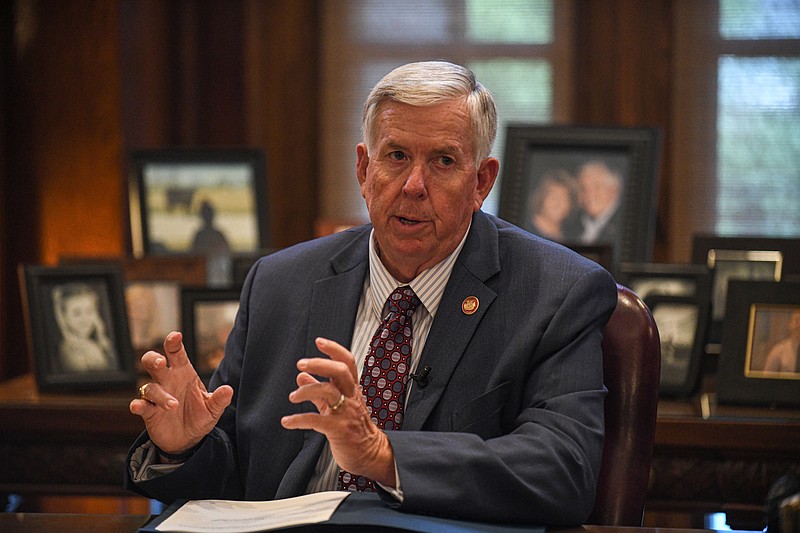 As Missouri Gov. Mike Parson prepares to sign SB 820, he talks about the importance of having access to the internet, especially high-speed internet anywhere in the state, rural as well as urban areas. He said that he thought this legislation would help make that reality. (Julie Smith/News Tribune photo)

The Missouri Capitol building is getting high-speed public internet by 2024, according to a new law signed by Gov. Mike Parson on Wednesday.

A provision within Senate Bill 820, an expansive internet and utilities bill, sets the deadline for getting high-speed public internet up and running for the Capitol building and grounds. The update may ease at-capacity bandwidth on existing networks within the building.

"That's been the quest for years, is to try to have Wi-Fi that can support the members, the reporters, the general public, all in the building at the same time when you have a day with a lot of people here," said Trevor Fox, House communications director.

Fox said during the Legislative session, which is peak action time for the Capitol building, there was a daily average of 800-1,000 devices connected to the House Wi-Fi network. The House was consistently maxing out its bandwidth despite upgrading hardware or software annually.

"They've just never been able to keep up with it," Fox said.

After 10 years of providing the network, Fox said, the House added a publicly posted password last session. That reduced the average number of devices on the network to 500 per day.

"Even then, they're still struggling to keep up with the amount of use," he added.

The House Wi-Fi is an open network, meaning anyone who enters the Capitol and is within range can use it. The Senate also has a public Wi-Fi network.

Fox said people have complained about spotty Wi-Fi connections for years, and working in a historic building made of metal and stone doesn't help because signals don't travel well.

"We've had over the years where the press in the press gallery, they're on the same Wi-Fi as everyone else and when you get everyone in the building at the same time and everybody hopping on it, no matter what your bandwidth is, suddenly it lags out," he said.

According to the legislation, the new public Wi-Fi network needs to be of "adequate bandwidth and connectivity to accommodate the number of users in the Capitol building and on Capitol grounds."

The new law contains a number of other provisions intended to further broadband development throughout the state.

It also requires providers to notify the state of those failures on applications for state funding.

The legislation also seeks to strengthen broadband reliability throughout the state by adding it to the list of endeavors that can be funded through the state's broadband grant program. The threshold for what the state considers "underserved" is also updated under the new law.

Broadband internet development has been a priority for Parson's administration, he said, because it's a need throughout the state.

"A lot of time we look at broadband in rural Missouri and I think we have an idea that that's where it needs to go, which it does, but broadband is needed all over the state," Parson said before signing the bill Wednesday.

He said there are many areas in the state he would expect Missourians to have adequate access to internet, but they don't. The governor said he appreciates the inclusion of updated broadband language in the legislation.

The new law also charges the Missouri Department of Economic Development, which houses the state Broadband Office, with creating a new program to increase high-speed internet access in unserved and underserved parts of the state and leaves what that program will look like up to the department.