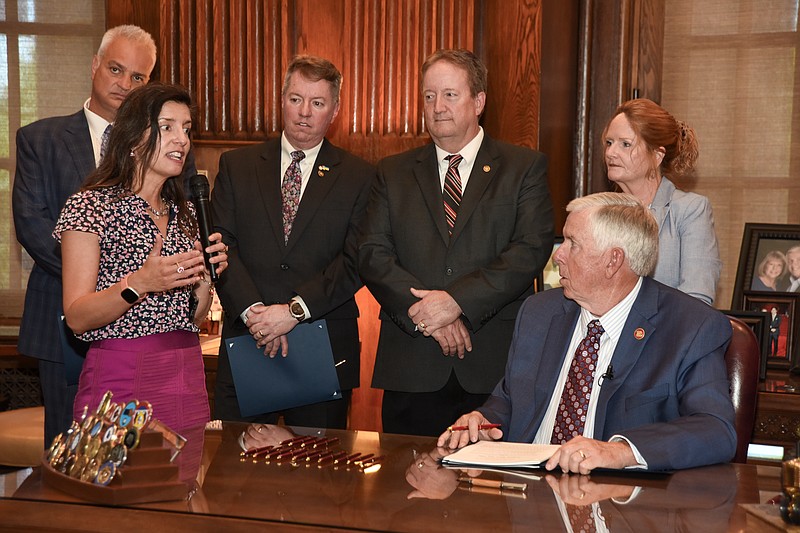 Mayor Carrie Tergin, second from left, talks about what the passage and signing of HB 1606 will mean for Jefferson City regarding the acquisition of properties by the city, most notably the vacant properties on E. Capitol Avenue. Missouri Gov. Mike Parson, seated at right, hosted a bill signing Wednesday, June 29, 2022, in his Capitol office during which he signed into law several pieces of legislation passed during this most recent session. Standing in the back row are legislators who worked on this particular bill and from left are representatives Bruce DeGroot, Michael O'Donell, Bill Falkner and Donna Baringer. (Julie Smith/News Tribune photo)

Under a new law finalized Wednesday, Jefferson City may not pay the property owner of 14 dilapidated buildings along East Capitol Avenue more than market value.

Missouri Gov. Mike Parson on Wednesday signed House Bill 1606 into law. The sweeping local government omnibus bill includes a provision that permits circuit court judges overseeing property condemnation cases to block a property owner from receiving heritage value if a city or municipality can prove the property is abandoned, declared a nuisance, contributes to blight, or is demolished or repaired after a hearing.

Heritage value, as defined in state law, is additional worth added to the market price of a property when it's been in the same family for more than 50 years. It's worth 50 percent of the market value.

Jefferson City Mayor Carrie Tergin said the new law will "have a clear impact on the revitalization of Capitol Avenue," and efforts to turn dilapidated properties over to redevelopers.

"We appreciate legislators for allowing this bill to pass and for your signature today because this will make a public safety difference and visible difference in how the future of Capitol Avenue looks," Tergin told the governor Wednesday. "Because without it, we would be having to pay quite a bit more for properties that have been allowed to get in that state. And now, we have an incentive to actually make it better, thanks to you."

Jefferson City officials approached state lawmakers earlier this year about creating the legislation as it looks to address 14 dilapidated properties along Capitol Avenue that belong to Barbara Buescher. The city has declared them dangerous and unsafe to live in.

Tergin said the properties put public safety officers at risk and increase the risk of crime in the neighborhood. The state's heritage clause would have required the city to pay an additional 50 percent on top of market value for the acquisition of Buescher's properties.

"We knew that that made no sense at all for us to have to compensate property owners even more when they had allowed their homes and properties to become in such disrepair that they were becoming a hazard for public safety," Tergin said.

The added heritage value was a hindrance to the city's revitalization efforts, the mayor said.

"Every dollar counts when you talk about the expense that it's going to take to revitalize these properties," she added.

At least three properties have been revitalized or are going through that process as a result of the city's legal action against Buescher, Tergin said.

"But a lot of these homes we couldn't necessarily do until they became in a dangerous state," she said.

Jefferson City is working on structural assessments for the Capitol Avenue properties, which will indicate which properties can be redeveloped and which ones will need to be demolished.

The city is expecting a mix of both, Tergin said, and has interest from redevelopers.

There are other properties throughout the city that would be affected by the new law, such as the Buescher Memorial Home, which Tergin said city officials are discussing what to do with. Another high profile property is the Truman Hotel, Tergin said, but it remains in code and hasn't been in the same family for more than 50 years, so it's not affected by the new law and the city can't do anything with it.

Tergin said she was proud city officials approached legislators to start a conversation around the state's heritage clause because it'll have impacts locally and for cities around the state.

Rep. Michael O'Donnell, R-St. Louis, helped work on some of the bill's condemnation language and said it will give cities the tools they need to acquire properties for development.

There are nearly 25,000 vacant properties in St. Louis that the city can't act on, O'Donnell said.

In addition to the condemnation provisions, HB 1606, sponsored by Rep. Peggy McGaugh, R-Carrollton, makes it a misdemeanor to sleep or camp on state-owned lands, requires deeds to indicate marital status and creates a prohibition against vaccination requirements for public employees, among several other measures.