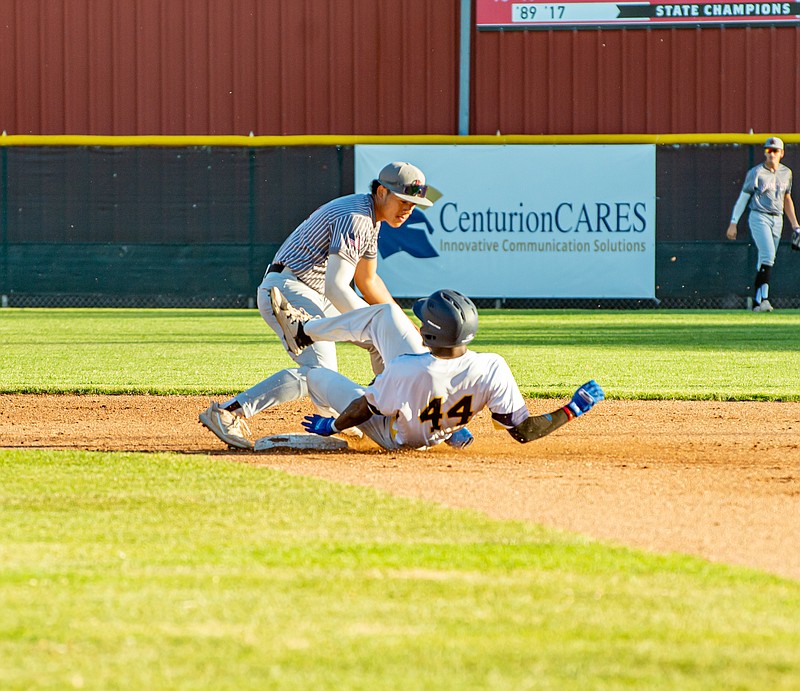 Walks and a key error cost the Jefferson City Renegades in a 6-4 loss to the Chillicothe Mudcats in MINK League action Wednesday night at Vivion Field.

The Renegades' offense came out of the gate hot, scoring four runs in the first four innings, but were held off the scoreboard for the final five innings. A trend that continued Wednesday after starting in the Renegades games earlier in the week.

"No idea, if I knew why we'd fix it," Renegades coach Mike DeMilia said on his offense's late inning struggles. "We have got off to good starts three games in a row, but I am not sure. I don't know if we are losing focus, it could be nothing related to anything mental but I have a feeling it might be. We have to get it fixed because we show glimpses of being really good offensively, but then we kind of just fizzle out."

It was the Mudcats who struck first.

A leadoff single by Elijah Maris on the first pitch of the game came around to score two batters later on a sacrifice fly from Tyler Bickers after Maris moved up two bases via a stolen base and wild pitch.

Jefferson City answered with a run of its own in the bottom half.

Adonis Forte led off the frame with a double to left field and later scored when Ross Lovich drove a fly ball to left field for a sacrifice fly.

The Renegades added a pair of runs in the bottom of the third.

Joe Hoerchler was hit by a pitch to start the inning and later scored after a wild pitch moved him to third base and an obstruction call on the play allowed him to take the extra base. TJ Racherbaumer later drew a bases-loaded walk to give Jefferson City a 3-1 lead.

Chillicothe answered in the top of the fourth with two runs of its own off Jefferson City starting pitcher Caleb Caraker. A pair of doubles started the inning before two productive groundouts brought home the second run.

Caraker's night ended after allowing three runs on five hits and a walk while striking out two in his four innings.

"He did not get off to a very good start, you could definitely tell he wasn't at his best" DeMilia said. "I thought the second and third innings he threw really well, though. Even in the fourth inning, he gave up a couple runs, but I didn't think it was bad. I thought he competed well, especially because he didn't have his best stuff. As a pitcher you still have to be able to pitch, and I thought he did a pretty good job at that."

Jefferson City quickly regained the lead in the bottom half after Ian Nolph was hit by a pitch and later scored on an RBI single from Ross Lovich that bounced off the pitcher's leg into right field, allowing Nolph to score from second base.

The lead would not last long as Braedyn Brewer led off the fifth inning with a solo home run over the left-field fence to even the score.

Chillicothe responded by bringing in Caleb Bergman, a side-arm right-handed pitcher, for the bottom of the fifth. Bergman would go on to pitch four-scoreless innings in relief to pick up the win while allowing four hits and no walks while striking out one.

"A guy like that, it's smoke and mirrors most of the time instead of stuff, it's just trying to catch a different angle and get your hitters uncomfortable and he did a good job of that," DeMilia said. "... It is tough as a hitter, especially when you get a feel for the starting pitcher, and then they bring in a guy that throws down low like that. It's sometimes tough to adjust. They kept us off balance for sure."

The game remained tied at 4 until the Mudcats broke through in the eighth inning.

A pair of walks followed by a hit by pitch loaded the bases with nobody out for Chillicothe with Tanner Schmitz dealt the hand of trying to dance the Renegades out of trouble. Schmitz picked up a strikeout for the first out and got the next hitter to roll a groundball slowly to Jackson Lovich at second base, but he decided to try and force a throw to second base to possibly start an inning-ending double play and the throw landed in left field, allowing two runs to score that would end up being the difference.

"He is trying to make a play and trying to help the team win, it's not for a lack of effort or lack of focus," DeMilia said. "Sometimes Jackson tries to do too much and he knows this. I am not mad at him for that play, but he probably should have gone to first one that one. I like the aggressiveness, though."

The loss pushes Jefferson City's record to 6-8 as it will look to get back on the right track today when it hosts the Nevada Griffons at Vivion Field. Game time is 7 p.m.