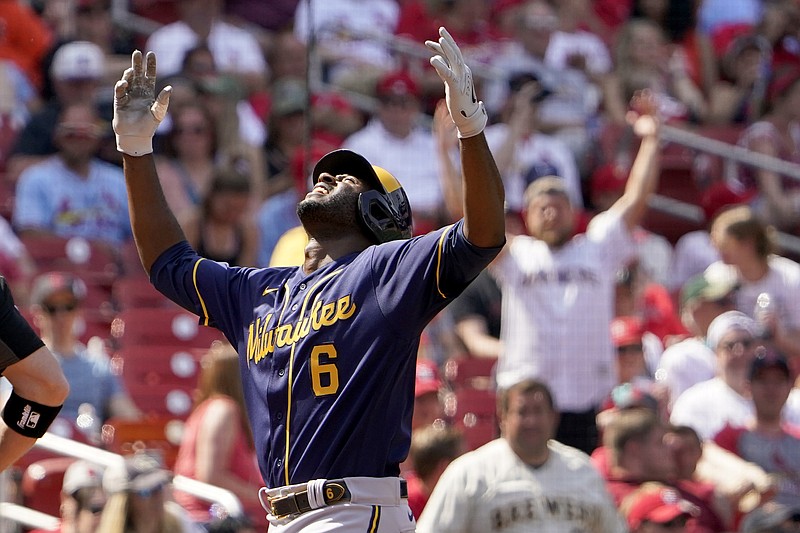 Lorenzo Cain of the Brewers celebrates as he arrives at home plate after hitting a two-run home run during the eighth inning of a game last month against the Cardinals at Busch Stadium in St. Louis. (Associated Press)

The Brewers made the announcement via social media Wednesday, four days after the two-time All-Star was designated for assignment. The Brewers' tweet included the message, "Thank you, Lo!" and was accompanied by a video showing some of Cain's greatest highlights with the franchise.

Cain was designated on the same day he reached 10 years of major league service, enabling him to be fully vested in the players' pension fund.

When he was designated for assignment Saturday, Cain spoke as though his playing days might be over.

"It just got to a point where it's probably time," Cain said at the time. "I haven't been performing like I would've liked, but the situation is what it is. I've had a great career. I can't really be upset about anything, but, yeah, it's time. I wish all my teammates the best, coaches, trainers, everybody that I've played with or met throughout my entire career, I wish them nothing but the best. It's been a really fun ride for me, for sure."

Cain made the All-Star Game and finished seventh in the N.L. MVP balloting in 2018 while helping the Brewers win their first N.L. Central title since 2011 and come a game away from their first World Series appearance since 1982. He won a Gold Glove the following year as the Brewers returned to the playoffs.

He played just five games in 2020 before opting out of the pandemic-shortened season. Cain batted .257 with eight homers and 36 RBI in 78 games last year.

Cain helped Kansas City win the World Series in 2015, his first year as an All-Star.