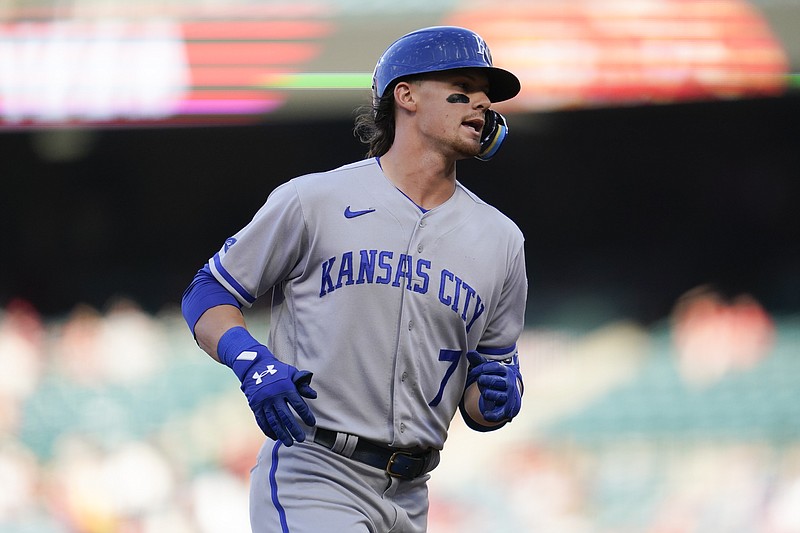 Bobby Witt Jr. of the Royals runs the bases after hitting a home run during the first inning of Tuesday night's game against the Angels in Anaheim, Calif. (Associated Press)

ANAHEIM, Calif. (AP) -- Shohei Ohtani hit two three-run homers, including a dramatic tying drive in the bottom of the ninth inning. He drove in a career-high eight runs, the most by a Japanese-born player in major league history.

And somehow, it still was not enough for his Los Angeles Angels to beat the Kansas City Royals.

Whit Merrifield led off the 11th inning with an RBI double, and the Royals overcame Ohtani's historic performance for a 12-11 victory Tuesday night.

Ohtani crushed a 423-foot homer in the sixth and a tying, 438-foot shot in the ninth, giving him the biggest RBI game of his five-year stateside career. The A.L. MVP then set the single-game record for RBI by a Japanese-born player with a sacrifice fly in the 11th inning.

Although he never complains publicly, Ohtani would be perfectly justified in feeling frustrated by his Los Angeles teammates' tepid pitching performance behind his latest heroics. But the Royals knew they won with some remarkable hitting of their own, including landmark games for both Carlos Santana and rookie Bobby Witt Jr.

"That's one of the most fun games I've ever been a part of," said Witt, who had his first multihomer game while driving in a career-high four runs. "Just top to bottom, there was a lot of energy going on. It was a blast. ... Every time Ohtani or (Mike) Trout come up to the plate, you hold your breath a little bit out there. It's fun to watch them play, and hopefully they don't do as much damage as they did against us (tonight)."

Ohtani's eighth RBI wasn't enough, because Merrifield and Kyle Isbel both drove in runs off Jose Quijada (0-2) earlier in the 11th.

Daniel Mengden struck out Trout with two Angels on base before Ohtani's flyout, and he retired Jared Walsh on a game-ending popup. Mengden earned his first save of the season and the second of his career as Kansas City held on for its fifth victory in six games despite blowing a five-run lead in the sixth and a three-run lead in the ninth.

"Just the energy and the fight, the way we just kept punching," Kansas City manager Mike Matheny said. "We'd take one, and they kept coming back. That's what I love to see. ... You see a game like that, and it's one that begins to repeat itself."

Santana had four hits and drove in a season-high five runs for the Royals, who battered the Angels' staff despite losing slugger Salvador Perez to a thumb injury in the third inning. Kansas City led 6-1 midway through the sixth before the Angels' star hitters finally got going.

Along with Ohtani's excellence, Walsh doubled, tripled and homered while driving in two runs for the Angels. He fell just short of his second cycle in 11 days.

"This one stings," Angels interim manager Phil Nevin said. "That room is hurting in there. You feel like it's in your grasp a couple of times, and you worked hard to get back in it. We just never quite got the lead, but a lot of great performances. We swung the bats great in some tight spots."

Ohtani trimmed the Angels' deficit to 6-4 when he drove his 14th homer to right-center. Royals starter Jonathan Heasley had pitched four-hit ball into the sixth before Ohtani's shot chased him.

Kansas City then led 10-7 entering the bottom of the ninth after Santana's late RBI single and Witt's two-run homer, but Tyler Wade singled and Trout walked before Ohtani drove them home with a no-doubt blast to right.

Walsh got three extra-base hits in four innings midway through the game, but couldn't get a hit in two additional at-bats. He finished a single shy of matching his first career cycle June 11 against the Mets.

Two Japanese players had previously driven in seven runs in a major league game. Tadahito Iguchi did it for the White Sox in 2006, and Hideki Matsui matched it for the Yankees in 2009.

Nevin was ejected during a pitching change in the seventh inning after arguing vociferously with the umpiring crew. Nevin was angry about a debatable balk call on Halos reliever Andrew Wantz earlier in the game.

Notes: Perez injured his thumb while swinging, but stayed in the game and completed his at-bat. The catcher said he'll have an MRI exam on his left thumb Wednesday, and he won't be surprised if he misses a few days. "Hopefully it's nothing bad," Perez said. "I've just got to wait." ... Ohtani (5-4, 3.28 ERA) looks to string together three straight mound victories in the series finale today against Kansas City's Daniel Lynch (3-6, 5.19). Ohtani's only previous pitching start against Kansas City was back in his A.L. Rookie of the Year season in 2018.