Lightning look to even Stanley Cup Final against Avalanche 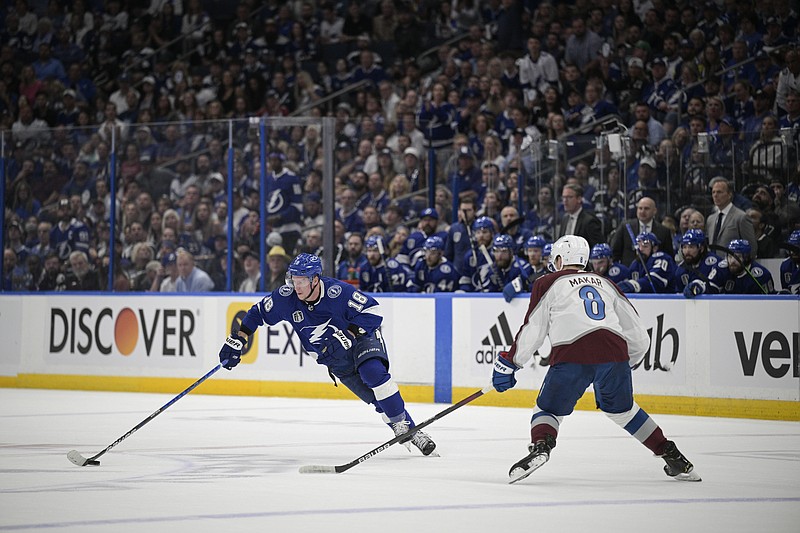 TAMPA, Fla. -- So much for the notion that the Tampa Bay Lightning might be running out of gas against the speedy Colorado Avalanche in the Stanley Cup Final.

Turns out the team's recipe for postseason success still works when the two-time defending champions incorporate all the ingredients.

Like goaltender Andrei Vasilevskiy reverting his customary stingy ways; Steven Stamkos, Nikita Kucherov and Victor Hedman lighting up the scoresheet; and a slew of lesser-known role players contributing offensively and defensively, too.

The Lightning still trail the best-of-seven series 2-1 after bouncing back from the most lopsided playoff loss in franchise history to beat the Avalanche in Game 3. C oach Jon Cooper is confident his team is trending in the right direction.

"I probably use this word too often, but there's a recipe in place for us to have success. It doesn't take a brain surgeon to see what hasn't worked for us in games where we've gotten blown out and what's worked for us in the games we've won. A big part of it is managing the puck," Cooper said.

"(The Avalanche) are a hell of a team. You give them an inch, they'll take a mile. So you have to take away the inches all over the ice," the coach added. "And if it breaks down you hope your goalie is there to make a save for you. If you manage the puck, it all takes off from there."

Game 4 is Wednesday night at Amalie Arena, with Colorado looking to move within one victory of its first Stanley Cup title since 2001 and Tampa Bay continuing its bid for the NHL's first three-peat in nearly 40 years.

Two nights after yielding seven goals in a blowout loss, Vasilevskiy rebounded with 37 saves in a 6-2 victory Monday night.

The Lightning's depth was an asset, too, with six players scoring goals and a total of 10 showing up on the scoresheet.

"I know it's similar to the last series, being 2-1, but we still need to win the next one. It'll be tough on us if we just sat here and said: `OK, we got one. We're going to be OK tomorrow,'" Cooper said. "Each game gets tougher and tougher. But the guys, give them credit. They knew what they had to do and they did it. But now we have to do it again."

Despite questions about who Colorado's goaltender will be moving forward, the Avalanche feel they're still in control of the series. A win Wedesday night would give them a commanding 3-1 lead heading back to Denver for Game 5 on Friday night.

"If you look at it, we are still in the driver's seat. ...We knew coming in here that it would be tough to win both games," Avalanche defenseman Erik Johnson said.

"The way they played at home, and the way they responded after a lot of losses in the playoffs, we knew that they were going to come with their best game. ... For us to get the split, we'd be sitting pretty good," Johnson added.

The Avalanche pulled goalie Darcy Kuemper after the netminder allowed five goals on 22 shots in Game 3, replacing him with Pavel Francouz.

Coach Jared Bednar did not say if he will stick with Kuemper as the starter for Game 4.

Colorado's Jack Johnson said the Avalanche have confidence in both goalies and are focused on regrouping as a team.

The Avalanche (13) and Lightning (9) have combined for 22 goals, making this the highest-scoring Stanley Cup Final through three games since the New York Islanders and Vancouver Canucks combined for 24 in the first three games in 1982.

Cooper hasn't ruled out the possibility of Tampa Bay having Kucherov available for Game 4. The Lightning star hobbled off after a taking a cross-check from Colorado's Devon Toews during the third period of Game 3.

"As I sit right now, I think he can play (Wednesday). But I'm not Kuch," Cooper said. "But if I know Kuch, he's sitting there saying the same thing. But we'll see what the doctor says about that."

Toews said he was playing Kucherov tight, but not trying to hurt him.

"You know, good players, you got to try to take away their time and space, and that's what I was trying to do," Toews said. "If he got hurt on it, it's unfortunate. I'm not trying to hurt anyone." 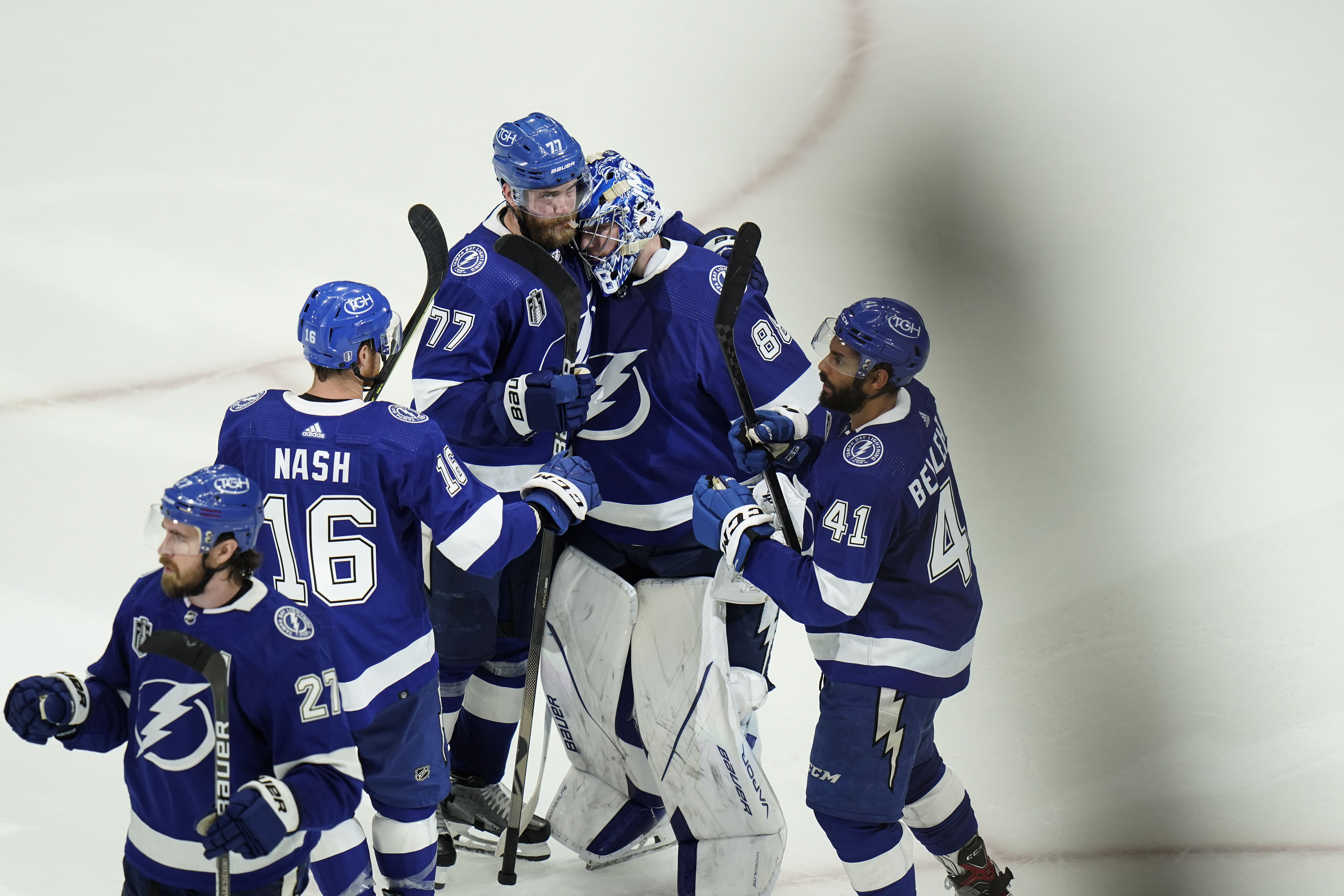 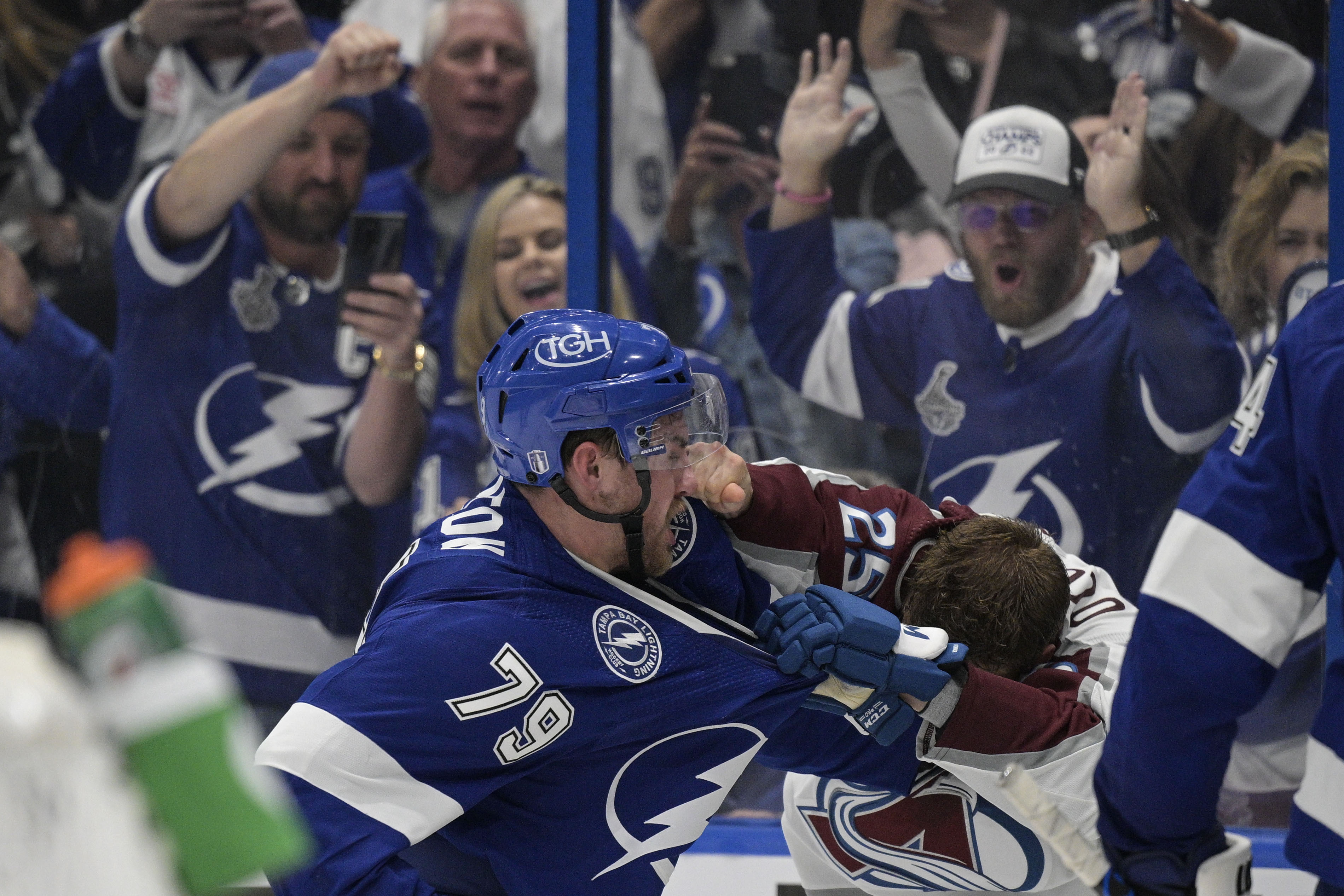 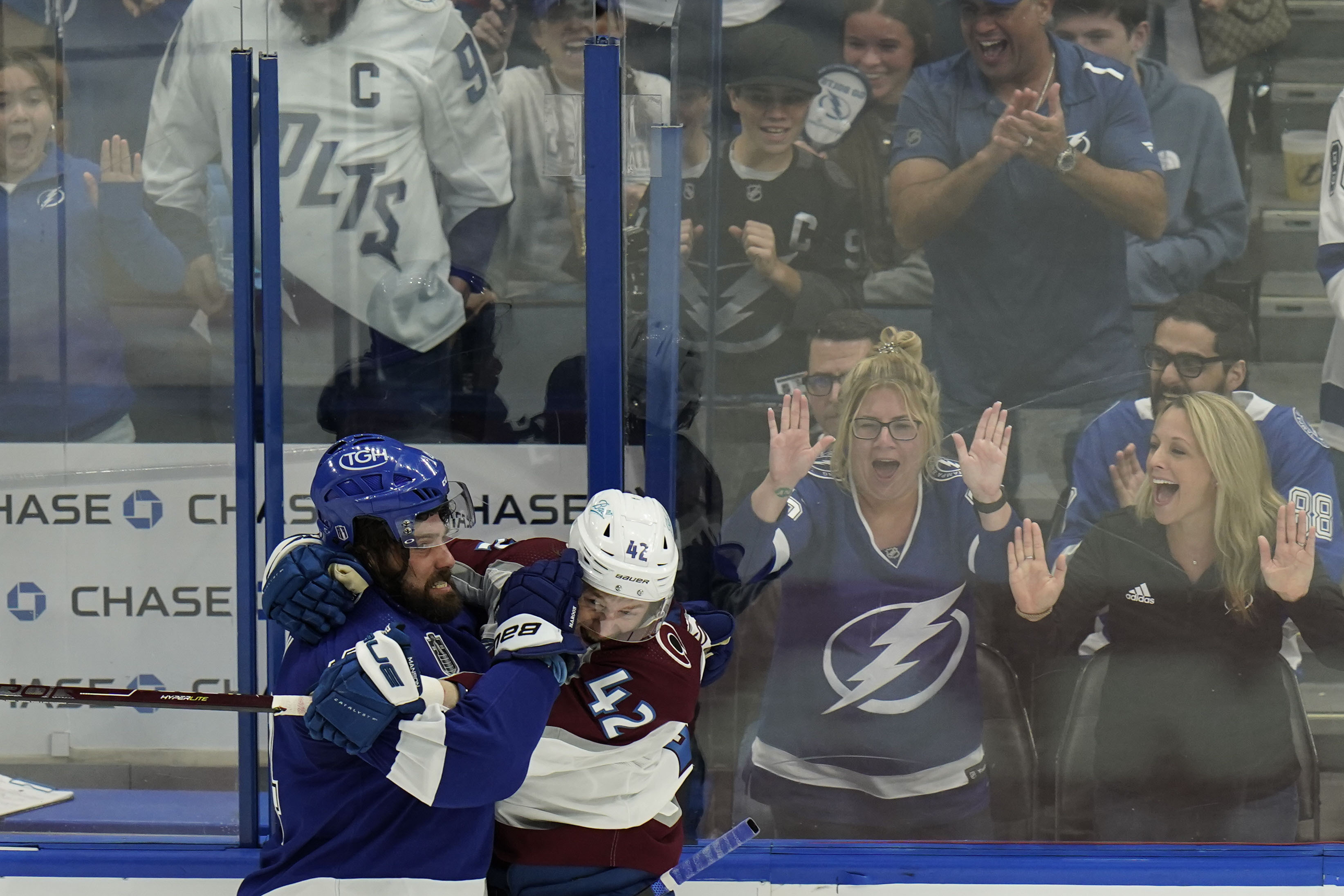 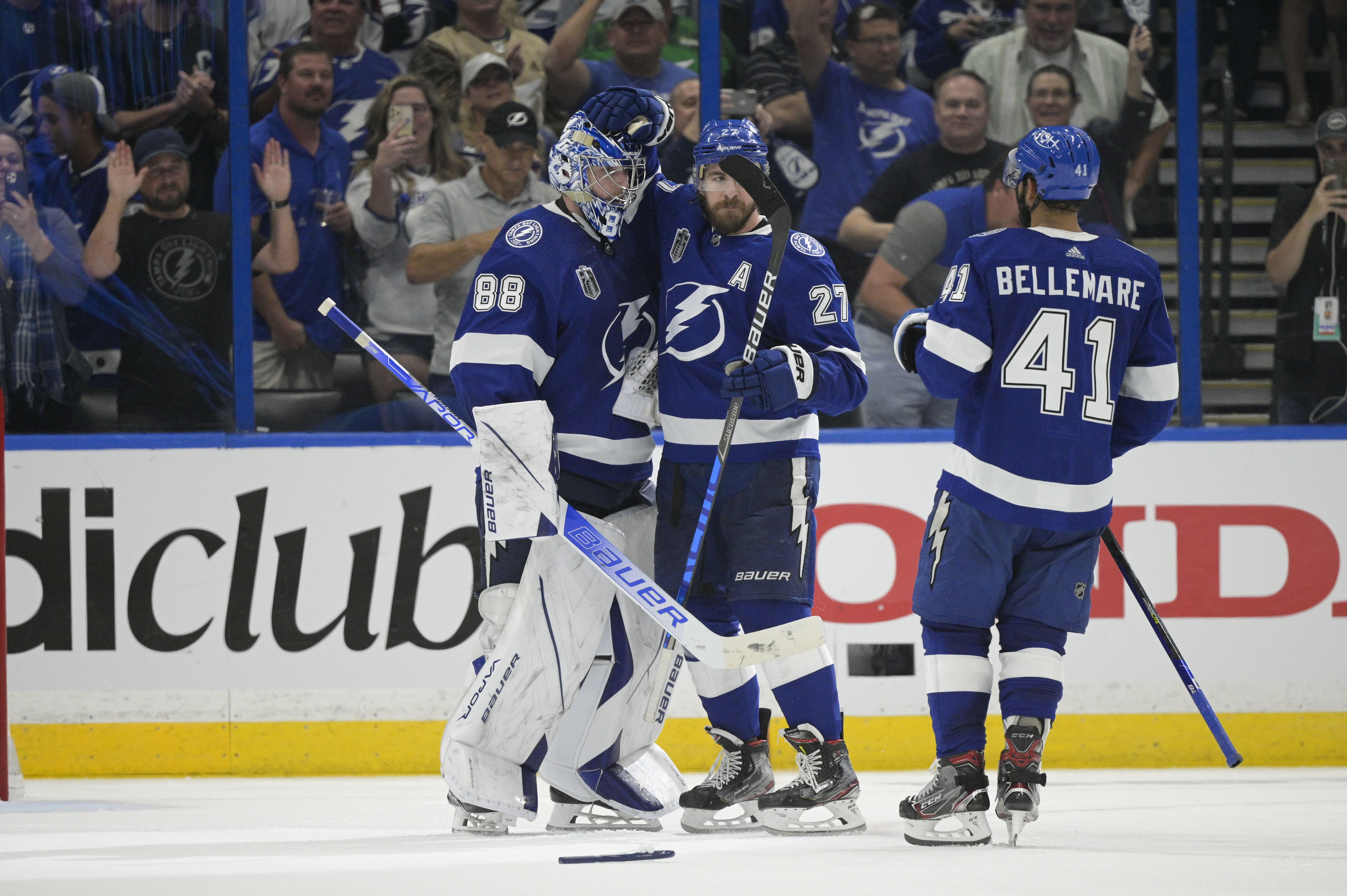