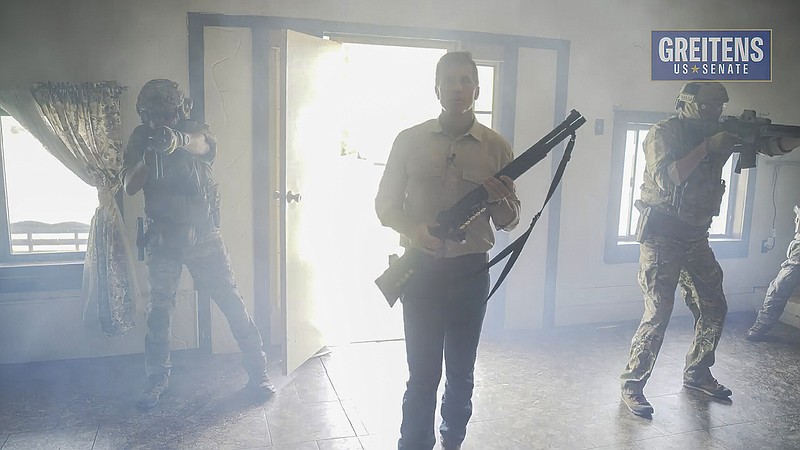 Eric Greitens defended his "RINO Hunting" video during a Tuesday morning radio interview, saying critics who see it as a call to kill political opponents are "snowflakes" expressing "faux outrage."

In an appearance in KCMO's "Pete Mundo in the Morning" show, Greitens said the video had been seen by 3.5 million people, generated thousands of hits on the fundraising site it promotes and achieved its dual purposes of getting attention for his campaign and outraging his opponents.

"It is entertaining to watch the faux outrage of all of the liberals and rhinos snowflakes around the country and around the state," Greitens said.

The 38-second video depicts Greitens, carrying a shotgun and with extras in tactical gear and military-style weapons, battering down the door of a home looking for RINOs, an acronym for Republicans in Name Only. They throw in flash grenades and Greitens says to get a "RINO Hunting permit" with "no bagging limit, no tagging limit."

Facebook removed the video for violating the site's policies "prohibiting violence and incitement." Twitter put a warning label on the video for "abusive behavior."

Greitens defended the video as an attempt to use humor in the campaign to make a point about Republicans who work too closely with Democrats.

But that's not how the video was interpreted by the Missouri Fraternal Order of Police, which has endorsed Attorney General Eric Schmitt in the Senate primary, or the Eagle Forum PAC, which hasn't endorsed anyone.

"This deplorable video has no place in our political system and sends a dangerous message that it is somehow acceptable to kill those who have differing political beliefs," the FOP said in a news release Monday.

The Eagle Forum PAC, an outgrowth of the movement founded by conservative leader Phyllis Schlafly, also denounced the video.

The Eagle Forum PAC called Greitens a "CRINO" -- a Conservative Republican in Name Only -- and called on him to withdraw.

"This horrific ad -- suggesting that firearms should be used to hunt human beings with whom he disagrees -- debases the right to keep and bear arms, dishonors law enforcement and the military, and is antithetical to conservative pro-life values," Eagle Forum President Kris Ullman said in the release.

Greitens was governor from January 2017 until he resigned on June 1, 2018, to settle a felony charge and avoid impeachment. He is attempting a political comeback in the Senate race for the seat being vacated by U.S. Sen. Roy Blunt.

The GOP primary has 21 candidates and Greitens has led in most polls. His top rivals in the race, according to the polls, are Schmitt, U.S. Reps. Vicky Hartzler and Billy Long, state Senate President Pro Tem Dave Schatz and St. Louis attorney Mark McCloskey.

One of the candidates struggling to break into that top six, Curtis Vaughn, of Springfield, said in a statement he did not see humor in the video and instead saw a call to hunt Americans.

"My take is that Greitens, just called on all of us-you, me, and any opponents to MAGA or him, to be murdered," Vaughn said.

Greitens was driven from the governor's office in 2018 as he faced felony charges stemming from a 2015 incident in his St. Louis home where he was accused of forcing a woman to have sexual relations and then allegedly photographing her naked and threatening to make the photos public if she told anyone about the encounter.

Greitens has denied all of the allegations.

"The creation and release of this video again demonstrates that Mr. Greitens does not possess the sound judgment necessary to represent the people of Missouri in the United States Senate, and that he has learned nothing from the legal problems he experienced prior to resigning as Missouri's governor," the FOP release stated.

The "RINO hunt" video comes as Greitens' ex-wife continues to accuse him of physically abusing her and their children in a Boone County child custody proceeding.

The case, which is about whether courts in Missouri or Texas, where Sheena Greitens lives now, is set for a trial in late July.

In the radio appearance, Greitens portrayed his time as governor as a success for cutting taxes, stopping low-income housing tax credits and calling lawmakers into special session to pass anti-abortion legislation.

In his 2016 campaign, Greitens told Mundo, he said "we're gonna blow up the political establishment. It didn't mean we're literally gonna blow up the Capitol with gasoline bombs. It meant that we're going to go and do exactly what we did."

Greitens dismissed a statement from state Senate Majority Leader Caleb Rowden that said he had asked the Missouri Highway Patrol to investigate a tweet from a pro-Greitens account, since deleted, that used the video to say they had their permit and are "coming for" Rowden, Gov. Mike Parson and others.

"I don't think we even need to respond to all of the RINOS and their histrionics," Greitens said.

In the radio appearance, Greitens said the ad was meant to set him apart from his foes and reinforce the message of his campaign that he was the real "America First" conservative.

"The question you could ask yourself is, was there any ad that the Eric Greitens campaign was going to do that RINOS and the mainstream media would love?" Greitens said. "Of course not. We knew that they were going to come out and attack us, and that's what they've done."