Faldo to retire as lead CBS analyst, replaced by Immelman 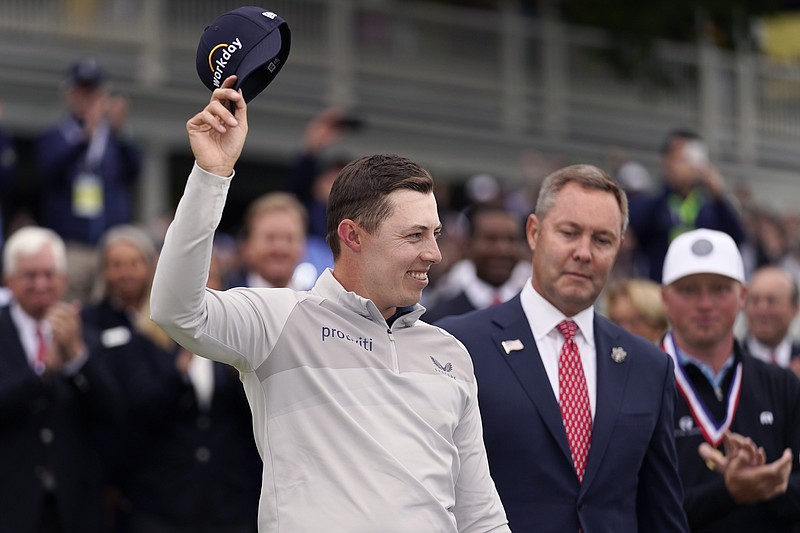 CROMWELL, Conn. (AP) -- Nick Faldo is leaving 16 years as the lead golf analyst for CBS Sports. In his place will be another former Masters champion.

No, not Phil Mickelson.

CBS announced Tuesday that Trevor Immelman of South Africa, who won the 2008 Masters and will be the International team Presidents Cup captain this year, will step in for Faldo starting next year.

Faldo, the three-time Masters and British Open champion, came to CBS in 2007 as the lead announcer after having previously worked at ABC. His last broadcast on CBS will be the final round of the Wyndham Championship on Aug. 7.

"Nick brought the same passion and dedication that propelled him to the world's number one golfer to our broadcasts," CBS Sports chairman Sean McManus said. "He combined his profound knowledge of golf with his wit and charm, enlightening viewers and elevating our coverage."

Mickelson, meanwhile, made a guest appearance for CBS after the third round of the PGA Championship at Harding Park in 2020 and received overwhelming reviews, prompting speculation that he might be carving a path for a career after golf. And then he won the PGA Championship a year later at age 50, only to lose corporate sponsors for his comments and involvement in the Saudi-backed LIV Golf series.

Immelman is only the fourth lead golf analyst for CBS in the last 50 years, following Faldo, Lanny Wadkins and the late Ken Venturi, who spent 35 years with the network.

NBC Sports says the final round of the U.S. Open had a total audience delivery of 5.41 million, the most-watched final round for a U.S. Open in the Eastern time zone since Justin Rose held off Phil Mickelson to win at Merion in 2013.

This year's edition also came down to the wire between Matt Fitzpatrick, Will Zalatoris and Masters champion Scottie Scheffler, with Fitzpatrick winning by one shot. Viewership peaked at 9.2 million when the last group was playing the 18th hole.

NBC says viewership was 65% more from Winged Foot in 2020, which Bryson DeChambeau won in September during the height of the COVID-19 pandemic.

Few records on the PGA Tour are more vulnerable when they involve money, from the spike in prize money and inflation.

The latest to fall was Jordan Spieth's record from 2015 when he won five times in 25 starts and made $12,030,465 in official money. That included a sterling mark in the majors with two wins, a runner-up and a tie for fourth.

Scottie Scheffler broke that record Sunday when he tied for second in the U.S. Open and earned $1,557,687. It was his second runner-up finish in his last three tournaments, this after running off four wins that included the Masters and a World Golf Championship. He now has $12,896,849 in 18 starts. And he still has two months left in the season, including a major and two lucrative FedEx Cup playoffs events.

Will Zalatoris set a money record, too, when he tied for second at Brookline. He now has $6,441,437, the most of any player for a single season without having won. That breaks the mark set last year by Louis Oosthuizen ($6,306,679) who, like Zalatoris, was runner-up in consecutive majors.

Zalatoris, of course, will get more chances over the next two months.

The USGA moved to a forward tee and a front pin on the par-3 11th for the final round at The Country Club, making it play 108 yards. That's the official number, but adjusted for elevation, USGA officials said it played 98 yards.

That would appear to be keeping with a short-term trend, no pun intended.

Next year at Los Angeles Country Club will make it three times in the last four years the U.S. Open had a hole that played under 100 yards. The famous seventh at Pebble Beach is under 100 yards to a front pin (and terrifying with the Pacific wind). The 15th hole on the South course at LACC played at just 78 yards in one of the Walker Cup matches in 2017 and is likely to be play around 90 yards for the U.S. Open.

Harris English is still trying to rebuild strength and form after only recently returning from hip surgery that kept him out nearly five months. So it was a big deal to make the cut in the U.S. Open with a 69 on Friday.

English had heard he had the longest active streak of cuts made in the majors (now at 15), but that wasn't the source of his motivation.

"I've never missed the cut in a USGA event and I was thinking about it," he said.

His best result was reaching the semifinals in 2011 at the U.S. Public Links, and his best as a pro was his third-place finish in the U.S. Open at Torrey Pines. His weekend at Brookline didn't go so well. English closed with 78-77. But at least he was still playing.

Wil Besseling of the Netherlands thinks the Dutch Olympic committee might reconsider its unusual standard for sending golfers to the Olympics.

Besseling and Joost Luiten qualified for the 60-man field for Tokyo, only to be kept home because Dutch officials added criteria that eligible golfers had to be among the top 36 in Olympic rankings and the top 100 in the world ranking to play in the Olympics. The reasoning was it only wanted athletes with a chance to win.

Luiten, a six-time winner on the European Tour, was No. 177 in the world and Besseling was at No. 221 when qualifying ended.

Slovakia's own Rory Sabbatini was No. 204 and won the silver. C.T Pan of Taiwan at No. 208 in the world won the bronze.

"The Olympics, especially now that golf is in the Olympics, is something you want to play," Besseling said at the U.S. Open. "Holland just made different rules to any other country. It was a shame. I would have been playing and it didn't happen."

Maybe they took notice of Brookline, where Besseling (No. 255 in the world) qualified for his first major and opened with rounds of 71-71. He played alongside Jordan Spieth on Saturday, and a 77-74 weekend dropped him to a tie for 56th.

"It's just a stupid rule to make," Besseling said. "I'm hearing they will change the rules for the next one, and hopefully next time we'll be there."

Divots: Scottie Scheffler became the fourth player in the last 20 years to have at least four wins and at least three runner-up finishes in one season. The others were Tiger Woods (three times), Phil Mickelson and Jordan Spieth. ... Jennifer Kupcho and Minjee Lee are the only LPGA Tour players with multiple victories this year. That includes a major title for both. ... Kupcho went to No. 9 in the women's world ranking with her victory last week. She is the 15th American woman to reach the top 10 since the ranking began in in 2006. ... Three players at the Travelers Championship celebrate birthdays on Tuesday -- Scheffler (21), Aaron Wise (26) and Russell Knox (37). ... Ben Griffin, Brandon Matthews and Trevor Werbylo bring the total to eight players who have earned enough points on the Korn Ferry Tour to secure PGA Tour cards for next year. ... The last three U.S. Opens have been won at 6-under par. ... "Winning a major's just a different level and that really does give me a hell of a confidence boost going into any event now." -- U.S. Open champion Matt Fitzpatrick.