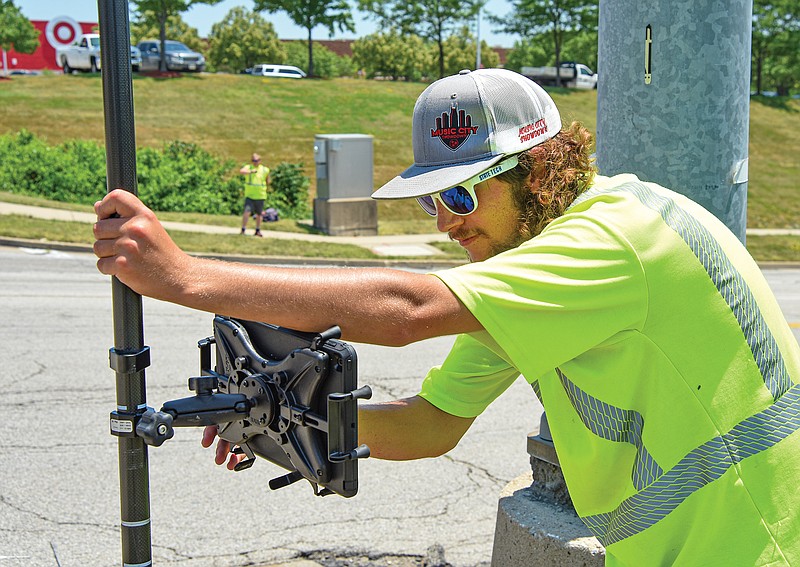 Dillon Wineland, of Jefferson City Public Works, uses a GPS locater on Tuesday, June 21, 2022, to enter precise location into an application that will be loaded into the MidMoGIS. Wineland and Chris Jaegers, shown across the street, worked to locate underground utility services. (Julie Smith/News Tribune file photo)

The Jefferson City Council tabled a vote Tuesday on whether to increase wages for city employees by five percent.

The matter will be reviewed at a council work session next week. The bill proposes an increase for full-time and part-time employees with benefits, and is aimed at retaining employees from leaving for higher paying jobs. Due to rising inflation levels, Ward 2 Council members Mike Lester and Laura Ward urged the council to approve the wage increase at Tuesday's meeting.

"Time is important, I do think we need to take action on it as soon as possible," Lester said.

"I really think we need to address this as immediately as possible," Ward said. "This has been presented to help out employees who are suffering from inflation across-the-board."

Some council members thought the sponsor, Ward 3 Council member Erin Wiseman, should be present to provide information on the bill.

"I would like to have the deal because I know the need is immediate," Ward 4 Council member Ron Fitzwater said. "It just seems like protocol that she ought to have an opportunity to speak on it."

In a 5-4 vote, Lester, Ward, Mark Schreiber and David Kemna voted in favor of passing the bill, while Fitzwater, Jon Hensley, Jack Deeken, Scott Spencer and Derrick Spicer voted to table it.

After a lengthy discussion, the council later deferred a resolution on suspending bus fares to the Transit Advisory Committee. The council asked for more information about how to market it as a city-wide promotion. If the suspension for fixed routes is approved later, it will likely occur for a six-month period.

With rising gas prices, making the bus service free to riders is an effort to gain ridership, though some council members wanted to see a more targeted marketing strategy.

"I don't think we planned to vote on this if we don't have a marketing plan moving forward," Ward said.

While Mayor Carrie Tergin said she thinks it is a good idea, she said "I don't feel like we have a strong plan to make a bus service better just by making it free."

Fixed routes cost $1 per ride. City staff said the suspension would amount to about $39,000 in revenue forfeited, but remaining funds from the CARES funding will be used to offset the costs.

The number of bus riders using the city service, JeffTran, has declined since 2018. Buses lost about 60,000 riders from 2018-21, according to data provided by the city Transit Department.

This year ridership has spurred promisingly, with numbers about 13 percent higher than 2021. The city's para-transit service, Handi-wheels, will not be included in the fare suspension, though it has seen a 33 percent increase in ridership from last year.

Council also heard a bill addressing litter Tuesday, or more particularly snow or ice removal on private property during the winter months. Director of Planning and Protective Services Sonny Sanders said the current litter ordinance does not allow city officials to act on hazardous material on streets or sidewalks in time-sensitive manner. Revisions to Section 1 of city code would allow any city official to directly reach out to owners if the property presents unsafe conditions for pedestrians or cars.

This is supposed to address the time-sensitive nature of the issue and to help people travel safely during wintertime. With the revisions, any city official is permitted to give notice to homeowners. Revisions mandate a sidewalk or street must be cleaned within 24 hours of the notice time or homeowners could face a misdemeanor penalty.

The council decided to forgo a $141,140 contract with the Engineering Surveys and Services to design a replacement for the Ohio Street bridge, which crosses Wears Creek at Louisiana Avenue and South Boulevard in Washington Park. Fitzwater noted that for this project, the city lacked funds in the budget.

CORRECTION: This article was edited at 11:10 a.m. June 22, 2022, to report that David Kemna voted in favor of passing an employee wage increase bill while Jon Hensley voted against it. The original version incorrectly reported their votes.