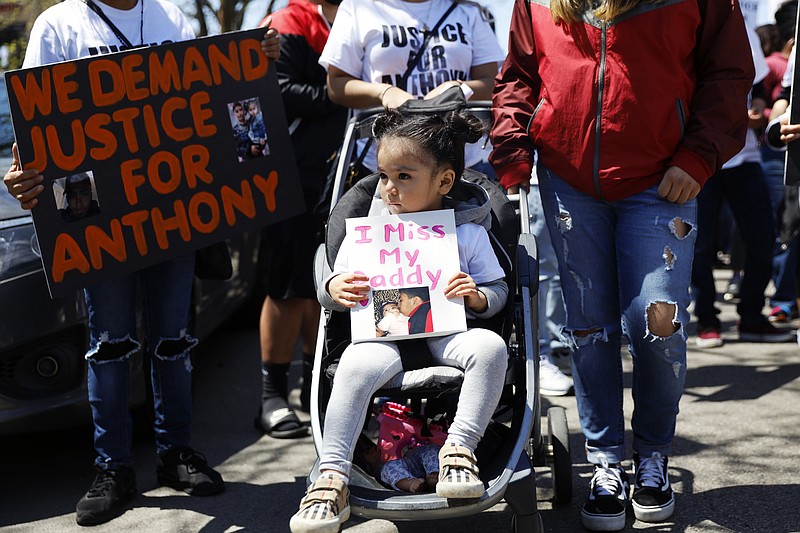 FILE - In this Saturday, May 1, 2021 file photo, Ailani Alvarez, 2, daughter of Anthony Alvarez who was shot by the police, holds a sign reading "I miss my daddy" during a protest in Chicago. Chicago police officers will no longer be allowed to chase people on foot simply because they run away or give chase over minor offenses, the department said Tuesday, June 21, 2022, more than a year after two foot pursuits ended with officers fatally shooting a 13-year-old boy and 22-year-old man. (AP Photo/Shafkat Anowar, File)

CHICAGO (AP) -- Chicago police officers will no longer be allowed to chase people on foot simply because they run away or they've committed minor offenses, the department said Tuesday, more than a year after two foot pursuits ended with officers fatally shooting a 13-year-old boy and 22-year-old man.

The new policy adheres closely to a draft policy put in place after those shootings and gives the department something it has never had: permanent rules about when officers can and can't engage in an activity that can endanger themselves, those they're chasing and bystanders.

Chicago Police Superintendent David Brown said he expects the new policy will make the officers and the public safer, as has happened in other cities with similar policies.

"The impact on crime has been studied (and) we can look back at what has made officers safer, has made communities safer for over a decade," he told reporters at a news briefing on the policy, which he expects to be in place by the end of the summer after all officers receive training.

Under the policy, officers may give chase if they believe a person is committing or is about to commit a felony, a Class A misdemeanor such as domestic battery, or a serious traffic offense could risk injuring others, such as drunken driving or street racing.

Officers won't be allowed to chase people on foot if they suspect them of minor offenses such as parking violations, driving on suspended licenses or drinking alcohol in public. But they will still have discretion to chase people who they've determined are committing or about to commit crimes that post "an obvious threat to any person."

Perhaps most significantly, the policy makes clear the days of officers giving chase just because someone tries to avoid them are over.

"People may avoid contact with a member for many reasons other than involvement in criminal activity," the policy states.

The names of 13-year-old Adam Toledo and 22-year-old Anthony Alvarez, who were armed when they ran from police in separate March 2021 pursuits, are not mentioned in the news release announcing the policy or the policy itself. But those pursuits -- particularly that of Alvarez -- cast a shadow over the policy.

Mayor Lori Lightfoot demanded the department create an interim policy after the shootings and the county's top prosecutor harshly criticized police over the Alvarez pursuit. It also appears the police department took pains to prohibit just that kind of foot chase.

Under the policy, the chase of Alvarez would apparently not have been allowed for two key reasons. First, when police chased him for a traffic violation they knew who he was and where he lived, Cook County State's Attorney Kim Foxx told reporters in March when she announced the officers involved in the two shootings wouldn't be charged. Second, officers are no longer allowed to chase on foot people who are suspected of the kind of minor offense that led to the chase.

The policy includes a number of circumstances in which an officer must call off a chase, including a requirement the pursuit must end if a third party is injured and needs immediate medical attention that can't be provided by anyone else. If officers realize they do not know exactly where they are, which is possible in a chaotic situation in which they are running through alleys and between houses, they must stop. And if they find themselves unable to communicate with other officers, because they drop their radios or for another reason, they must stop.

The policy also makes a point of reminding officers they or their supervisors will not be criticized or disciplined for deciding against a foot pursuit or calling one off -- the significance of which a law professor who has studied the department and was part of a legal team that successfully fought the city over its refusal to release video of a police shooting said can't be overstated.

"How do you change the culture you have to chase those bad guys no matter what, no matter how dangerous to everyone who is around you?" University of Chicago Law Professor Craig Futterman said. "You create polices that make it so you can't be disciplined, chewed out, criticized for following a policy and not engaging in an inherently dangerous act."

Officers are also prohibited from provoking chases, such as by employing a tactic in which they speed in their squad cars toward a group of people, stop suddenly and jump out "with the intention of stopping anyone in the group who flees."

The city has been waiting for a policy since long before the shootings of Toledo and Alvarez.

Five years ago, the U.S. Department of Justice issued a scathing report saying too many police chases in the city were unnecessary or ended with officers shooting people they did not have to shoot. And three years ago, a judge signed off on a consent decree that included a requirement to adopt a foot pursuit policy.

The city also had plenty of evidence about the dangers of foot pursuits, including a Chicago Tribune investigation that found a third of the city's police shootings from 2010 through 2015 involved someone being wounded or killed during a foot pursuit.

Police officials have denied any suggestion they have been dragging their feet, pointing out the department has met the established deadlines.

But Chicago has not taken the lead on the issue, with other major cities such as Baltimore, Philadelphia and Portland, Oregon, already having implemented foot pursuit policies and Futterman said the department has resisted following suit for years despite knowing how dangerous foot pursuits can be.

Still, he praised the department. 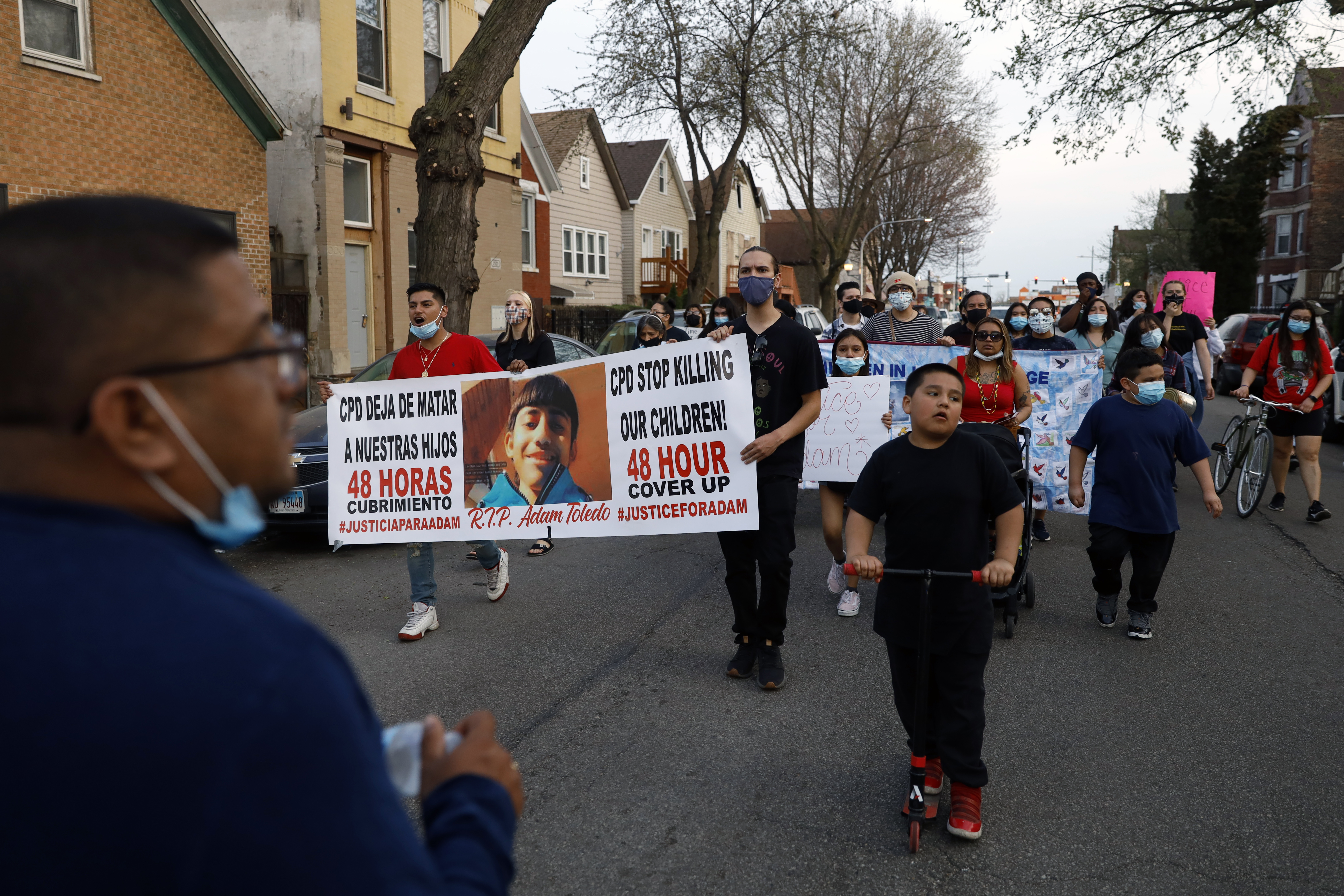 FILE - In this Tuesday, April 6, 2021 file photo, members of Chicago's Little Village Community Council march to protest against the death of 13-year-old Adam Toledo, who was shot by a Chicago Police officer at about 2 a.m. on March 29 in an alley west of the 2300 block of South Sawyer Avenue near Farragut Career Academy High School. Chicago police officers will no longer be allowed to chase people on foot simply because they run away or give chase over minor offenses, the department said Tuesday, June 21, 2022, more than a year after two foot pursuits ended with officers fatally shooting a 13-year-old boy and 22-year-old man. (AP Photo/Shafkat Anowar, File)