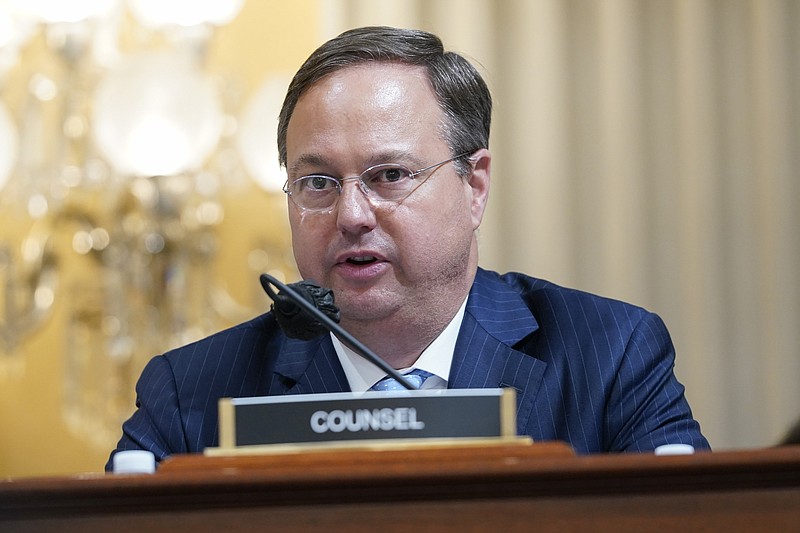 FILE—John Wood, committee investigative staff counsel, at the House select committee investigating the Jan. 6, 2021, attack on the Capitol hearing at the Capitol in Washington, June 16, 2022. An effort is underway in Missouri to get Wood to run as an independent for U.S. Senate. Supporters on Monday, June 20, launched a website, and former U.S. Sen. John Danforth said he also supports a run by Wood. Danforth said in an interview that politics has become too polarized and a right-leaning centrist like Wood could set the tone for change. (AP Photo/Susan Walsh, File)

Republican former U.S. Sen. John Danforth and others are urging a former federal prosecutor who is an attorney for the congressional committee investigating the Jan. 6 insurrection to make an independent run for Missouri's open Senate seat.

A committee on Monday launched a website encouraging John F. Wood to run for retiring GOP Sen. Roy Blunt's seat. The website said Missourians "deserve an alternative," and called Wood a "principled leader who has put country over party when the stakes are highest, and is committed to serving the people of our state with integrity."

The launch came the same day a leading Republican candidate for the seat, former Gov. Eric Greitens, released a campaign video showing him brandishing a shotgun and declaring he's hunting RINOs, which stands for Republicans in Name Only. The ad drew strong criticism, including from some conservatives.

Steve Crim, a spokesperson for johnwoodformo.org, said Tuesday that Wood considers himself a Republican whose beliefs "align philosophically with the majority of Missourians." He expects Wood to decide soon if he'll run. A message left with Wood's office wasn't returned.

Danforth, 85, said in an interview he had nothing to do with the website but also wants Wood to run. Wood once worked on Danforth's Senate staff.

"He is exceptionally able and qualified and experienced, and also has the temperament and really the heart for the job," Danforth said.

To get on the November ballot as an independent, Wood would need to submit petitions signed by 10,000 registered voters by Aug. 1. Wood also would have to quit his job; federal employees are prohibited from seeking federal political office.

Wood, 52, served as U.S. attorney for Missouri's Western District from 2007-09 and prior to that held key roles in the George W. Bush administration. He was working as general counsel for the U.S. Chamber of Commerce when he stepped down in September to become senior investigative counsel for the Jan. 6 committee.

Blunt's announcement last year he would not seek a third term set off a frenzy to replace him. The field of candidates includes 21 Republicans.

In addition to Greitens, who resigned as governor in 2018 in the midst of an investigation into whether he used a compromising photo to blackmail a woman from speaking about their extramarital affair, GOP contenders include Attorney General Eric Schmitt, U.S. Reps. Vicky Hartzler and Billy Long, Missouri Senate President Pro Tem Dave Schatz and St. Louis attorney Mark McCloskey.

Polls have consistently shown Greitens at or near the top, raising concerns among many leading Republicans that he could win the nomination in August but lose to a Democrat in November, ceding what should be a safe Republican Senate seat.

Leading Democratic contenders include former Marine Lucas Kunce and Trudy Busch Valentine, who is part of the Busch brewery family.

Danforth, of suburban St. Louis, first expressed his displeasure with the GOP field in February. He reiterated Tuesday the Senate needs right-leaning centrists like Wood who can find a way around the partisan divide so prevalent in Washington.

The problem of polarization "is not confined to our state," Danforth said. "But here we are right in the middle of the country, and we have an opportunity to send a message to America that there is an alternative to political extremism."