Despite Western arms, Ukraine is outgunned in the east 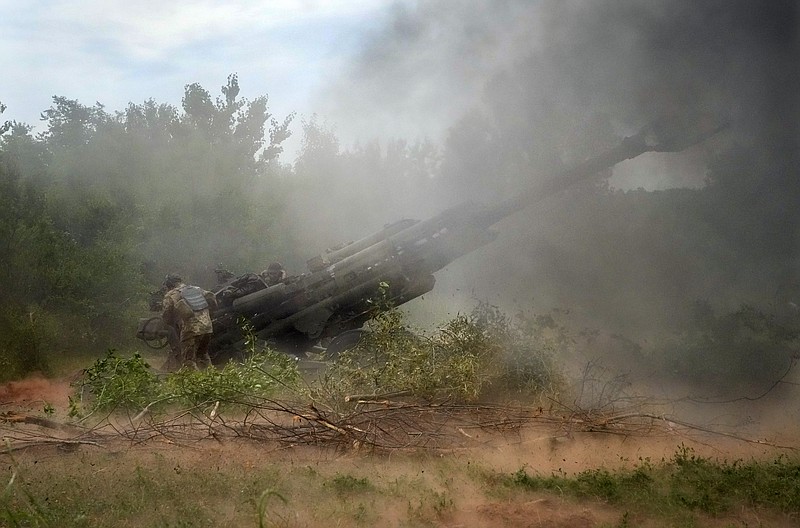 By ANDREA ROSA and JAMEY KEATEN

BAKHMUT, Ukraine (AP) -- Holed up in a bombed-out house in eastern Ukraine, Ukrainian troops keep a careful accounting of their ammunition, using a door as a sort of ledger. Scrawled in chalk on the door are figures for mortar shells, smoke shells, shrapnel shells, flares.

Despite the heavy influx of weapons from the West, Ukrainian forces are outgunned by the Russians in the battle for the eastern Donbas region, where the fighting is largely being carried out by way of artillery exchanges.

While the Russians can keep up heavy, continuous fire for hours at a time, the defenders can't match the enemy in either weapons or ammunition and must use their ammo more judiciously.

At the outpost in eastern Ukraine, dozens and dozens of mortar shells are stacked up. But the troops' commander, Mykhailo Strebizh, who goes by the nom de guerre Gaiduk, lamented that if his fighters were to come under an intense artillery barrage, their cache would, at best, amount to only about four hours' worth of return fire.

Ukrainian authorities say the West's much-ballyhooed support for the country is not sufficient and is not arriving on the battlefield fast enough for this grinding and highly lethal phase of the war.

While Russia has kept quiet about its war casualties, Ukrainian authorities say up to 200 of their soldiers are dying each day. Russian forces are gaining ground slowly in the east, but experts say they are taking heavy losses.

The Kiel Institute for the World Economy in Germany last week reported that the U.S. has delivered about half of its pledged commitments in military support for Ukraine, and Germany about one-third. Poland and Britain have both come through on much of what they promised.

Many foot soldiers say they can't even begin to match the Russians shot for shot, or shell for shell.

Earlier this month, Ukraine's ambassador in Madrid, Serhii Phoreltsev, thanked Spain -- which trumpeted a shipment of 200 tons of military aid in April -- but said the ammunition included was enough for only about two hours of combat.

Part of the problem, too, is that the Ukrainian forces, whose country was once a member of the Soviet Union, are more familiar with Soviet-era weaponry and must first be trained on the NATO equipment they are getting.

An untold number of Ukrainians have traveled abroad to get training on the Western weapons.

"What the Ukrainians have got to do is conduct what military people tend to call a counter-battery operation" to respond to Russian artillery fire, said Ben Barry, a former director of the British Army Staff who is senior fellow for land warfare at the International Institute for Strategic Studies. "To do this, you need accurate weapons with a high rate of fire and a range that allows them to keep out of the way of the other side's artillery."

"The Ukrainians are saying they don't have enough long-range rockets to adequately suppress Russian artillery," he said. "I think they're probably right."

As it now stands, Ukrainian have to use "shoot and scoot" tactics -- fire, then move before the Russians can zero in on them.

Better NATO hardware, even in small quantities, is often welcome.

Time may be on Ukraine's side, the experts say. Ukrainian fighters are both motivated and mobilized -- all men in the country of 40 million have been called to fight, whereas Russia has so far avoided a call-up of conscripts, which could vastly tilt the war in Russia's favor but may not be popular domestically.

Print Headline: Despite Western arms, Ukraine is outgunned in the east