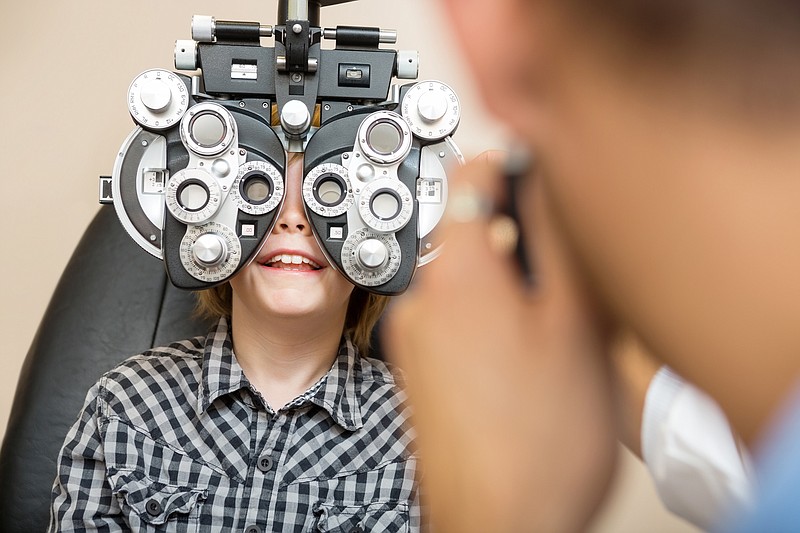 The Centers for Disease Control and Prevention estimates that more than 600,000 children and teens are blind or have a vision disorder. (Tyler Olson/Dreamstime/TNS)

Jessica Oberoi, 13, can't exactly remember when her eyesight started getting blurry. All she knows is that she had to squint to see the whiteboard at school.

It wasn't until last fall when her eighth grade class in Bloomington, Indiana, got vision screenings that Jessica's extreme nearsightedness and amblyopia, or lazy eye, were discovered.

She's been going through intense treatment since then, and her optometrist, Dr. Katie Connolly, said Jessica has made great improvements -- but her lazy eye, which causes depth perception problems, may never go away. The chances of it being completely corrected would have been much higher if her condition had been caught earlier, said Connolly, chief of pediatric and binocular vision services at Indiana University's School of Optometry.

Jessica is one of the countless students falling through the cracks of the nation's fractured efforts to catch and treat vision problems among children.

The Centers for Disease Control and Prevention estimates that more than 600,000 children and teens are blind or have a vision disorder. A recent opinion article published on JAMA Network notes that a large number of these children could be helped simply with glasses, but because of high costs and lack of insurance coverage, many are not getting that help.

Yet the National Survey of Children's Health, funded by the federal Health Resources and Services Administration, found that in 2016-17 a quarter of children were not regularly screened for vision problems.

And a large majority of those vision impairments could be treated or cured if caught early, Connolly said.

"Screenings are important for kids because kids don't realize what's abnormal," Connolly said. "They don't know what their peers around them -- or even their parents -- are seeing to realize their experience is different."

Eye exams for children are required under federal law to be covered by most private health plans and Medicaid. Vision screenings are mandated for school-age children in 40 states and the District of Columbia, and 26 states require them for preschoolers, according to the National Center for Children's Vision and Eye Health at the nonprofit advocacy organization Prevent Blindness.

Still, many children who are struggling to see clearly are being overlooked. The pandemic has only exacerbated the issue since classes moved online, and for many students in-school vision screenings are the only time they get their eyes checked. Even when campuses reopened, school nurses were so swamped with covid testing that general screenings had to be put to the side, said Kate King, president-elect of the National Association of School Nurses.

"The only kids who were getting their vision checked were the ones who were complaining about not being able to see," King said.

The problem is most prevalent among preschoolers, according to the national center. It points out that the federal survey of children found that 61 percent of children 5 and younger had never had their vision tested.

Kindergarten, Connolly said, is a critical time to check a child's vision because not only are they old enough to cooperate with eye exams, but it's when vision problems are more likely to be identifiable.

The CDC survey also found that 67 percent of children with private health insurance had their vision screened, compared with 43 percent of those who were uninsured.

Optometrists, physicians and school nurses are concerned not only about children's visual acuity, but also their ability to learn and overall quality of life. Both are strongly linked to vision.

"There seems to be an assumption that maybe if children can't see, they'll just tell somebody -- that the problems will sort of come forward on their own and that they don't need to be found," said Kelly Hardy, senior managing director of health and research for a California-based child advocacy group, Children Now. But that's not the case most of the time because children aren't the best advocates for their own vision problems.

And when left untreated, those problems can worsen or lead to other serious and permanent conditions.

"It feels like a pretty low-tech, pretty easy intervention to make sure that kids have a chance to succeed," Hardy said. "And yet there's kids going around that haven't had their vision screenings or haven't had an eye exam, and that seems unacceptable, especially when there's so many other things that are harder to solve."

Her brother, Tanul Oberoi, 7, tagged along on her follow-up visit to Connolly's clinic and had his vision screened for the first time. His serious astigmatism was identified, and he now wears glasses. Since his condition was caught early, there is a good chance his eyesight with glasses will improve and that over time his prescription will be reduced.

"It was surprising to me that they have trouble seeing because they didn't say anything to me before," said Sonia Oberoi, Jessica and Tanul's mom. "They usually tell me when they have a problem, and I watch them when they read something. I didn't know."

Getting vision screenings is only part of the battle, Connolly said. Purchasing glasses is a stretch for many families lacking coverage since the average cost without insurance is $351 a pair. The JAMA article points out that in developing countries, sturdy glasses made from flexible steel wire and plastic lenses can be manufactured for about $1 a pair but that option is not generally available in the U.S.

Since Jessica and Tanul are not insured, their mom said the family would have to pick up the cost of their glasses. Connolly's clinic worked with several programs to completely cover their treatment and glasses, plus contacts for Jessica.

The issue goes beyond poor eyesight and overlooked vision problems. There is a strong link between children's vision and their development -- especially the way they learn. Struggling to see clearly can be the beginning of many downstream problems for children, such as low grades, misdiagnosed attention-deficit disorders, or lack of self-confidence.

In a 2020 study by researchers in Spain published by the International Journal of Environmental Research and Public Health, students who had "bad academic performance" were twice as likely as those with "good academic performance" to admit that they can't see the blackboard properly. Additionally, those who performed poorer academically were also twice as likely to get tired or suffer headaches while reading, according to the study.

"Kids do better in school and they do better socially if they're not going around with uncorrected vision problems," Hardy said. "And so it feels like a no-brainer that we need to make sure that we're doing better to make sure that kids are getting the care they need."

King, who works at a middle school in Columbus, Ohio, said that even before the pandemic students' vision problems were being overlooked.

Of all the optometrist referrals she sends home, she said just around 15 percent of children are taken to an eye doctor without her having to reach out to parents again.

"An overwhelming majority actually don't follow up and don't get a comprehensive exam," King said.

Another issue is that Medicaid and private insurance usually cover one pair of glasses every year or two, which King said is not ideal for growing and clumsy children.

"School nurses are experts at glasses repair," King said, while chuckling. "Often we need to put in a new nosepiece or put in a new screw, or get them fixed because a classmate sat on them."

Kaiser Health News) is a national newsroom that produces in-depth journalism about health issues. Together with Policy Analysis and Polling, KHN is one of the three major operating programs at KFF (Kaiser Family Foundation). KFF is an endowed nonprofit organization providing information on health issues to the nation.