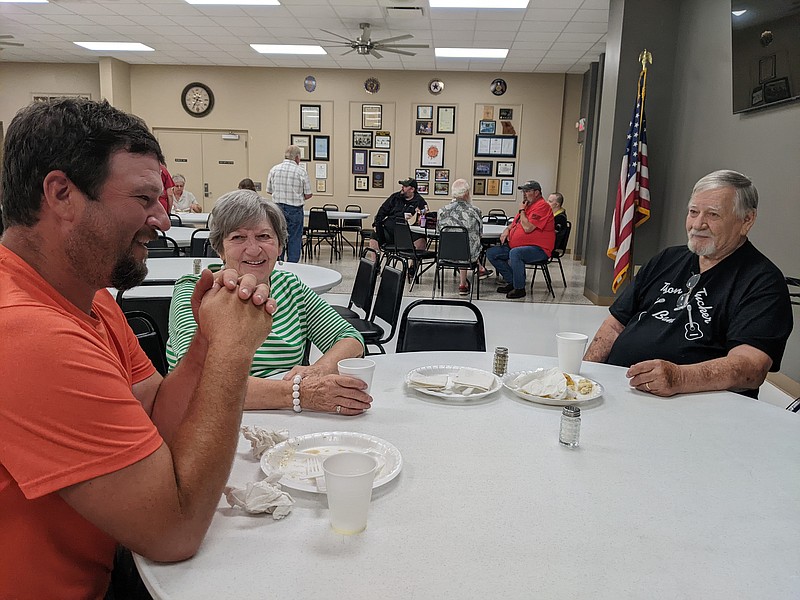 Aaron Bernskoetter joined his parents Harry and Cathy for breakfast and conversation Sunday, June 19, 2022, at the American Legion Post 5 in Jefferson City to celebrate Father's Day. Harry, the father of four sons, and Aaron, the father of two daughters, generally don't like the attention of Father's Day but find small ways to celebrate with family. (Ryan Pivoney/News Tribune photo)

Every dad is different and the qualities that make them unique are worth celebrating.

Whether it's learning to become more patient or taking on selfless tasks, dads often set an example for their children and future generations.

"It's kind of hard to explain," said Jim Mead, a father of five. "It's their day to honor me and sometimes I feel I don't need to be honored, just be yourselves and that's an honor. My kids have all been successful so, for me, that's my biggest honor."

In addition to his five adult children -- the youngest of which recently retired from the Air Force -- Mead has 14 grandchildren. Volunteering his Father's Day is nothing new.

The American Legion has been offering a Father's Day meal for more than 25 years and has a similar event for Mother's Day. The Meads usually lend a hand.

Mead said he volunteers to help other families celebrate their fathers and to support fellow veterans.

"It's just to give the opportunity to other families to come in and enjoy a day out of the house and treat their fathers to a meal," he said.

Wolters said he mowed his lawn Saturday, so his plans for Sunday were to relax and visit his son's house.

"I don't think we're going to do a damn thing, actually," he said with a chuckle.

Wolters said his family is close and they have breakfast together often, which makes it feel like Father's Day all year long.

It's important to be a good father, Wolters said, because there aren't enough of them in the world today. He said he hopes his sons learned to be good fathers and work hard to set their children up well to navigate the world.

Cody Sharpe, 47, is a behavioral specialist with a local school district and said he often sees children without a father.

"That helps me be a better father because I realize there are a lot of kids that don't have fathers, so I'm sometimes the only positive male role model for some of the students that I see," Sharpe said.

Sharpe has two boys ages 5 and 9. After playing a game of basketball, he and his family stopped at Last Flight Brewing Company for pizza and a beer.

Sharpe's Father's Day varies from year to year, he said, but it usually involves fun activities for the family.

"My wife, obviously, makes it a bigger deal, but it's kind of cool," he said. "I think it's good for the kids to see that dads need to be celebrated. I've always said moms get, sometimes, too much credit -- there's a lot of good dads out there but it sometimes gets overshadowed so it's kind of neat."

Since becoming a father, Sharpe said he's learned to be more patient and realized it's okay to make mistakes, as long as you learn from them.

"You're going to make mistakes, no parent is perfect," he said. "Learning from those mistakes and fixing the problems that happen when those mistakes happen, that's a big deal because we're going to screw up. Like I told them the other day, parents aren't perfect, we're just like kids, we mess up all the time."

Having two children, he said, helps with correcting some mistakes the second time around.

Sharpe said it's easy to get caught up in material motivations, but on Sunday, he was cherishing the fleeting time he has with his boys.

"I think the most important thing is to appreciate these days because they're not always going to be around," he said. "One day, these kids are going to be 16 years old and they're not going to want to do this."

According to the Missouri Economic Research and Information Center, 74 percent of Midwesterners had Father's Day plans this year.

Americans spent roughly $20 billion on Father's Day in 2022 as the average consumer spent $171.79 on gifts. Both total and average spending were down from last year.

The most popular gifts to celebrate dads this year were cards, clothing and special outings, according to MERIC. At $3.4 billion nationwide, special outings are where the most money was spent this year.

Collins owns and operates Misty Mountains Guiding Service, which was promoting its services Sunday at Last Flight. The company sells fly fishing gear and offers training, among other fishing and guiding services.

"Today, I'm just kind of sharing my love for the support and talking to folks that might be interested in booking a trip and just talking fishing," he said. "Father's Day is a good day for it."

Collins and his wife said it was an important day to be with family, which is why his wife and 11-month old son Oliver were with him promoting Misty Mountains.

As he begins the journey of fatherhood, Collins said he's relying on his own father's patience and ability to instill life values.

Those values can come from a wide variety of lessons, the Bernskoetters said.

His 48-year-old son, Aaron, said even those bad examples were good examples to learn from while growing up.

Aaron has two daughters and said he hopes they learn to work hard and maintain a balanced, centered life so they can handle whatever comes their way.

"I enjoy being a father, for sure, but I don't want any special treatment," Aaron said of the holiday. "It just seems like everything runs together, but we might take a little time and have a meal or something today."

Aaron Clark, 38, has an 11-year-old and a 6-year-old. He said spending Father's Day with them was the most important thing he had to do Sunday.

After picking up a new grill from Lowe's, Clark and his family spent time relaxing at Last Flight Brewing Company before celebrating with family friends who recently became first-time parents. He said his Father's Days are usually the relaxing kind.

"To me, today was a really big reminder of how important I am to my family. It was a big reminder," Clark said. "I think that sometimes us dads think that we are bottom of the totem pole, so to speak, but it's the little things that they appreciate that they share on this day."

Clark didn't have a father figure until the sixth grade, he said, when his stepfather came into his life. He recently rekindled his relationship with his father and said the connections he has developed are inspiring.

"He is a perfect example of what a father should be," Clark said. "So, though I got to experience that later in life, it was still good to see that."

"They're my legacy," Clark said. "I'm a reflection of them and if I see them failing in that aspect of their life then I've failed them as a father." 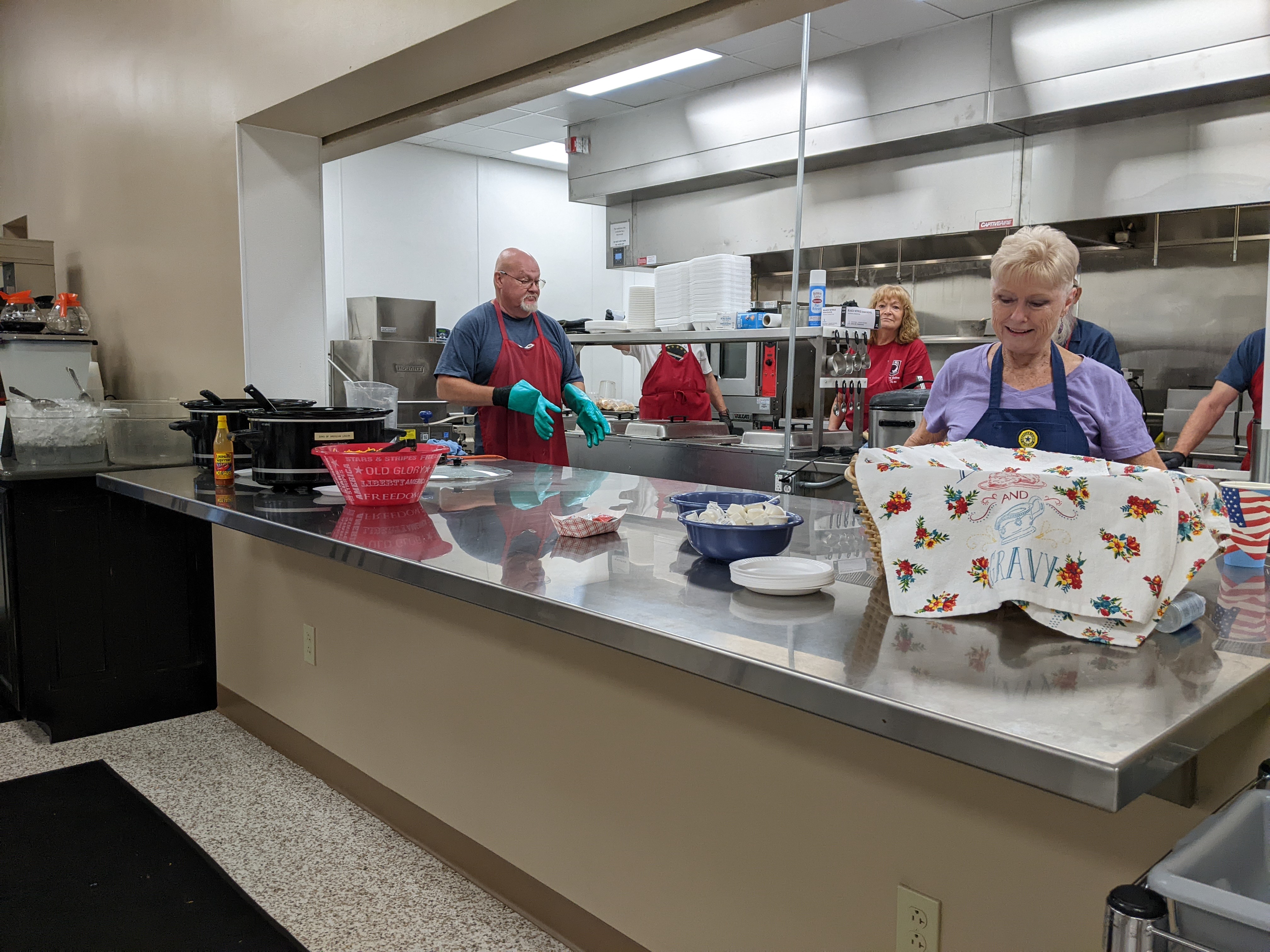 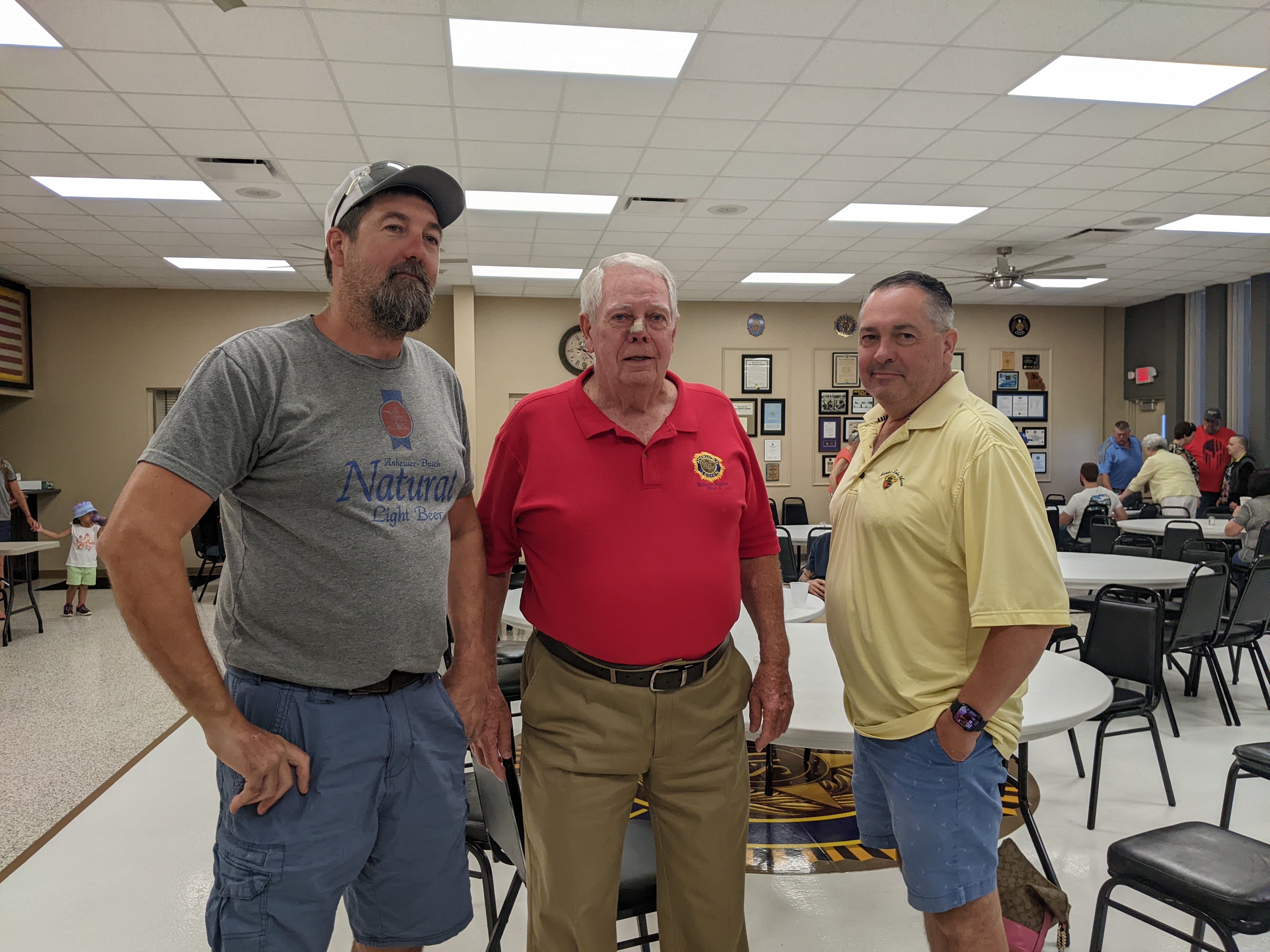 Don Wolters was joined by sons Lance and Rick in celebrating Father's Day on Sunday morning, June 19, 2022, at the American Legion's free brunch in Jefferson City. Don said his gift this year was a couple of drinks at the Eagles Club. (Ryan Pivoney/News Tribune photo)