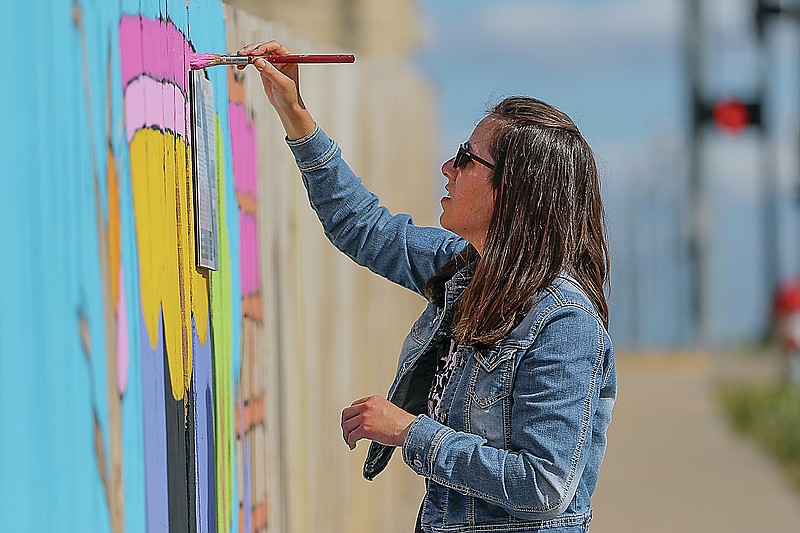 Innovative jobs are becoming a bigger focus across the country and state, and Jefferson City's workforce is no exception.

Amy Greenbank, a local artist who has done murals around town, such as the colorful one on Capitol Avenue she painted last year, as well as commission work and teaching, said the community has upped its focus on the arts -- one of the job sectors identified by the U.S. Bureau of Labor Statistics' O*NET program as an innovative profession.

"In recent years, the opportunities for artists have picked up here in town," Greenbank said. "The mural I did on East Capitol Avenue was one of the first, and they're trying to add more. It's a great opportunity for artists to get their name out there, and Jefferson City is looking to add more of that unique vision throughout the community."

She said artists also had plenty of opportunities through local groups like Capitol Arts and the Art Bazaar, while festivities around town like Porchfest and Chalk Art Festival allowed artists to show their talent and sell their work.

Artists make up a portion of the innovative jobs market, an area where Jefferson City nearly matches the national rate and leads the state in terms of an innovative workforce index, according to a new report.

Innovative jobs, as defined in the report, are those requiring creativity and alternative thinking to develop new ideas and work-related solutions. These occupations range across a wide variety of fields, from science, technology engineering and math (STEM) to the arts and education.

Examples in the report include airline personnel, choreographers, physicists, chief executives and agricultural producers. Those industries are also scaled most to least innovative, with more creative occupations like designers taking higher scores while more blue-collar jobs were assigned a lower score, with these values and their prominence in different metros impacting those communities' rankings.

The Jefferson City area received a 59 on the composite innovation index, ranking No. 157 for all metros, while the U.S. as a whole came in at 59.5. The metro area saw 1.4 percent of workers employed in innovative fields, or around 1,040 employees.

The report, compiled by research firm Smartest Dollar, ranked metros across the country based on their Occupation-Level Innovation Score, an index of the employment-weighted average of each metro area, as well as data from the U.S. Bureau of Labor Statistics.

The report noted the highest index scores were in areas of the country that were considered knowledge hubs, like Massachusetts, as well as manufacturing-heavy areas like Michigan.

It also found little correlation between above-average pay and the innovative scale of an occupation, since wages fluctuate wildly from one profession to another.

The full report can be found at smartest dollar.com/research.