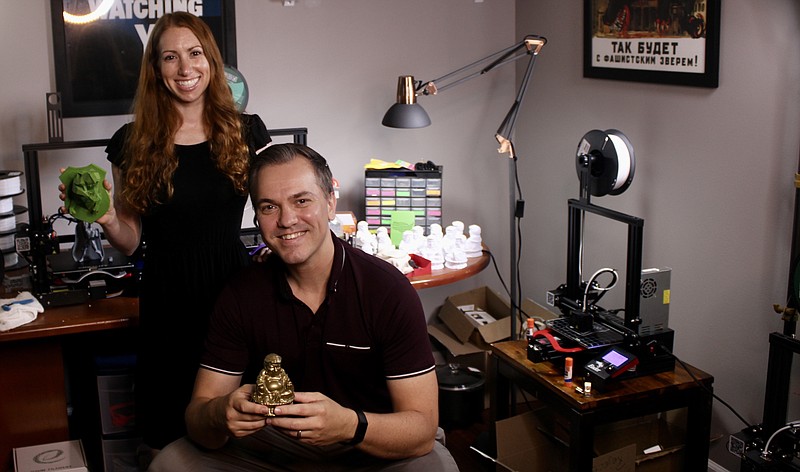 The new home-based business started with small figurines that placed the Founding Fathers' heads on Buddha bodies, and it has seen plenty of interest since it began in May.

The venture launched just over a month ago and has already received around 200 orders, owner Austin Petersen said. Customers are drawn to the unique designs, and Petersen -- a former presidential candidate and current radio host for Jefferson City's KWOS station -- said that explosive interest has given him hopes to reach new audiences in the near future.

"There's nothing like this: You can buy a shirt with American flag anywhere, but this is different," Petersen said.

Petersen said he was in talks with a local non-profit to print custom promotional items, while he could see movie theaters requesting custom prints of concession items or other promotional options.

Petersen prints the items on an array of printers in his home and his wife, Stephanie, sands off any imperfections and handles the shipping.

He said his first 3D printer was gifted to him last year, and interest quickly grew after a photo of a test figurine of Thomas Jefferson made the rounds online. The printer farm has now grown to five machines, allowing the couple to quickly produce their figures despite the hours of printing that it takes to create one.

"The thing that makes us unique is the 3D printing, but funny," Petersen said. "I work overtime to come up with things that are going to make you laugh. It disarms you, and it starts a conversation. We serve a niche market, but it's a good niche -- a strong niche."

You can learn more and shop at ap4libertyshop.com.

Know of any business happenings around Jefferson City? Let us know at biz [email protected] or 573-761-0243.