Missouri Capitol hosts young leaders from around the state 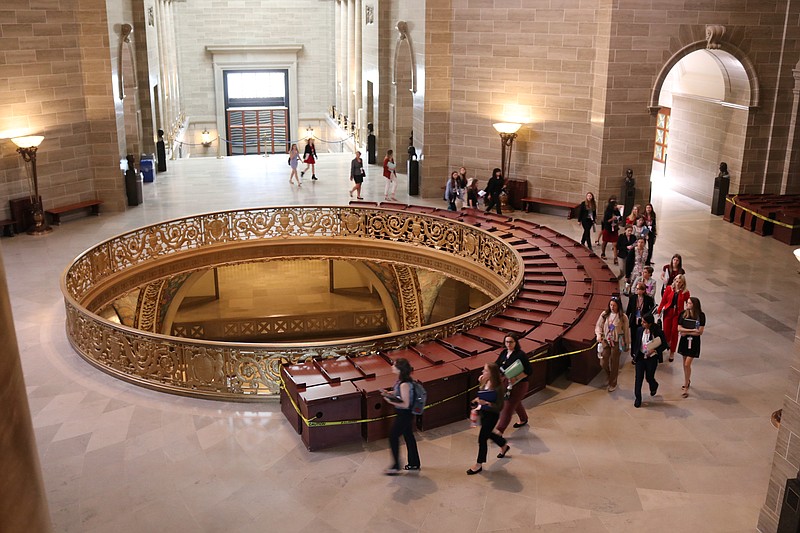 Members of Missouri Girls State pass a group of desks that have been removed from the Missouri House chamber Wednesday, June 15, 2022, as they head to the Senate chamber for their mock legislative session in Jefferson City. (Anna Campbell/News Tribune photo)

Normally subdued during the summer months, the Missouri Senate chamber was humming with life Wednesday as high school girls from across the state held a mock legislative session for Missouri Girls State.

American Legion Auxiliary Missouri Girls State, in its 80th session, is intended to "promote pride in America and to create a mythical state that the citizens will govern at the city, county and state level," according to its website.

Participants are chosen by an application and interview and are assigned to different cities and political parties during the week. They participate in activities that teach leadership and civics and spend the week in a specific school of instruction, such as the School of Campaigns and Political Operations or the School of Education.

The House and Senate sessions were held in the Senate chambers due to renovations in the House chamber.

Girls State representatives were split between the floor and the gallery because there weren't enough seats, but other that, everything was identical to a normal House session, from the opening prayer and pledge to the reading of bills, to the requests for decorum from the House speaker.

Members of the Missouri House walked around offering advice and assistance. Rep. Peggy McGaugh, R-Carrollton, stood on the dais, offering advice to the House speaker, while Reps. Chuck Basye, Ed Lewis, Willard Haley, Sara Walsh and Ann Kelley roamed the floor and helped Girls State representatives follow the script to inquire of other members, offer amendments or speak on a bill.

Also similar to a real-life House session was the press gallery, which held two students specializing in newspaper and broadcast journalism during their week at Girls State. Alivia Roach, of Jackson, and Amaya Morgan, of Kansas City, watched the proceedings while jotting down a few notes.

Bills offered on the floor centered on Girls State rules and proceedings, including a bill to encourage more homeschoolers to attend, a bill to require period products to be offered in the bathrooms through an additional dollar cost to each Girls State attendee, and a bill that would require clear labels on foods that contain common allergens during mealtimes.

Most bills met with a few inquiries, but little opposition. One bill, intended to promote equality between Girls and Boys State, would offer sports at Girls State and do away with some dress code rules and it sparked a bit more discussion.

Girls State representatives also got to enjoy a few of the bells and whistles of legislative action: the floor leader was able to move the previous question twice, and the House speaker got to pound the gavel after Rep. Chuck Basye stepped -- very deliberately -- into the line of debate.

After voting on a final bill, Girls State representatives filed out of the chamber to eat a quick lunch, and the next group filed in to do it all again.

While many of the girls needed help at first, they fell into more of rhythm toward the end of the session.

"It was definitely a bit shaky, but that's to be expected, of course. I honestly really enjoyed it because it was people that I knew, and it was on subjects that I actually knew about and supported and believed in," Roach said.

"I thought it was pretty interesting, I just didn't expect it to be so long," said Morgan, adding she was impressed with how some of the girls articulated their opinions.

Morgan said she'd like to be a filmmaker or a White House correspondent, while Roach said she was interested in journalism and politics.

"I've been doing things that I never thought I would be able to do," said Roach, adding the community at Girls State helps surround you.

Morgan agreed, saying the girls all seemed to be having a lot of fun.

Both agreed they were most looking forward to the party convention later on that day, where they would learn about their party's platforms, hear candidate speeches and choose representatives. The platforms will branch beyond Girls State policies and will cover traditional governmental issues.