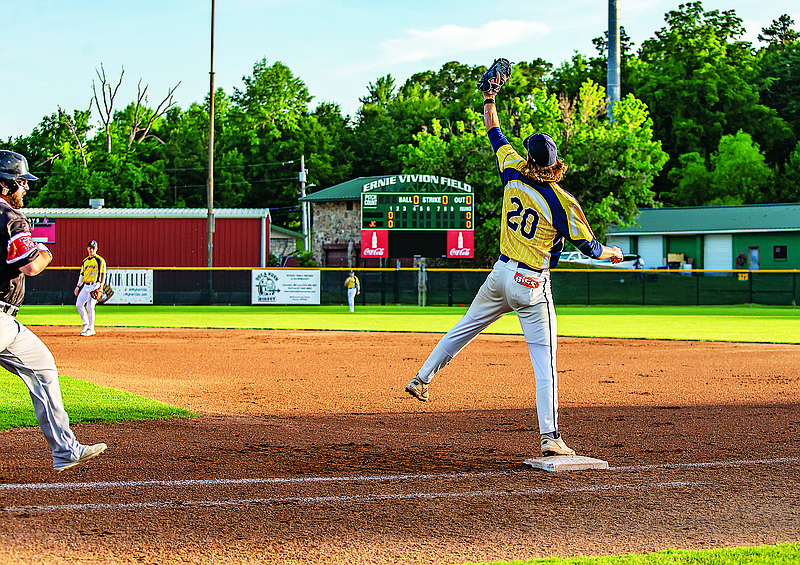 Jefferson City Renegades' First Baseman Ian Nolph from Wardsville reaches for the throw to get the put out Wednesday night, June 15, 2022, against Joplin at Vivion Field in Jefferson City. (Ken Barnes/News Tribune photo)

A passed ball and a wild pitch were the difference Wednesday night in the Joplin Outlaws' 2-0 win against the Jefferson City Renegades in MINK League action at Vivion Field.

Despite being outhit 6-to-2, the Outlaws drew eight walks that helped plate a pair of runs to grab the victory in the third of four games between the two sides this week.

The Renegades walked it off Sunday against Joplin for a 7-6 win and the Outlaws returned the favor in an 11-9 win in Joplin on Monday.

"That's the way it is sometimes," Renegades coach Mike DeMilia said. "Baseball is not necessarily a game of luck, but you make your own luck sometimes. We couldn't get a big hit, they didn't really get a big hit either, but we made a couple more mistakes than they did and that's the way it goes."

Brady Maltbie got the start on the mound for Jefferson City and cruised through the first five innings while only allowing two walks and a hit, but he ran into some trouble in the top of the sixth.

After a walk and a fielder's choice started the frame, Max Bruff picked up the last hit the Outlaws would get with a single to center field. The ball got passed Cole Wagner in center and allowed the lead runner to move up to third base, but Bruff was thrown out at second base for the second out. Maltbie could not get out of the inning as he walked the next two batters to load the bases.

Maltbie exited after 5⅔ innings pitched while allowing two runs (one earned) on two hits and five walks while striking out four.

"He was getting tired," DeMilia said. "He even told me he was losing feel of a few of his pitches, but that is what happens when you get a little tired. It's still hot and things like that. He was battling and competing, but he was tired. I probably left him in a batter or two too long, but I was trying to get him out through that sixth with that shutout. I thought he pitched really well. The walks looks worse than they really were. I thought his command was pretty good, it's going to look like his command wasn't, but I thought it was good for the most part."

DeMilia made the call to the bullpen for Drew Voss to pitch. Voss struggled to find the zone in his first few pitches, sending a pair of pitches to the backstop that brought home the two Joplin runs before picking up a strikeout to get out of the inning.

"Drew is one of our perfect examples of a guy that hasn't pitched a lot," DeMilia said. "He didn't get a lot of innings in the spring and this is only his second outing this summer, so he hasn't really been on the mound and it took him a little bit to figure it out. Once he did, he was good. It was a little uneasy at first, but hopefully every outing gets him a little bit better. He's got a lot of ability, he got a lot of swings and misses there, but he's got to be in the zone."

Edrian Rangel got the start and win on the mound for the Outlaws (5-6) after he tossed six scoreless innings while spacing out five hits to go along with his three strikeouts and no walks.

Cole White came out of the Joplin bullpen and threw three scoreless frames with only one hit allowed while striking out two and walking none.

"I thought we had some good at-bats, we only struck out five times," DeMilia said. "We have had a little problem with striking out this year, but only five strikeouts. You would think if we got shut out, we would have punched out a lot more than that but we didn't. We hit some balls hard, but unfortunately we weren't able to get that big swing with a runner on."

Ross Lovich led the way for Jefferson City (3-5) at the plate after a 2-for-4 night with a pair of doubles. Cole Wagner, Luc Fuller, Jackson Lovich and Jack Matousek each picked up a hit for the other five Renegade hits on the night.

The Renegades will look to rebound today when they travel to Joplin for the final meeting of the week between the two sides with a 7 p.m. start.