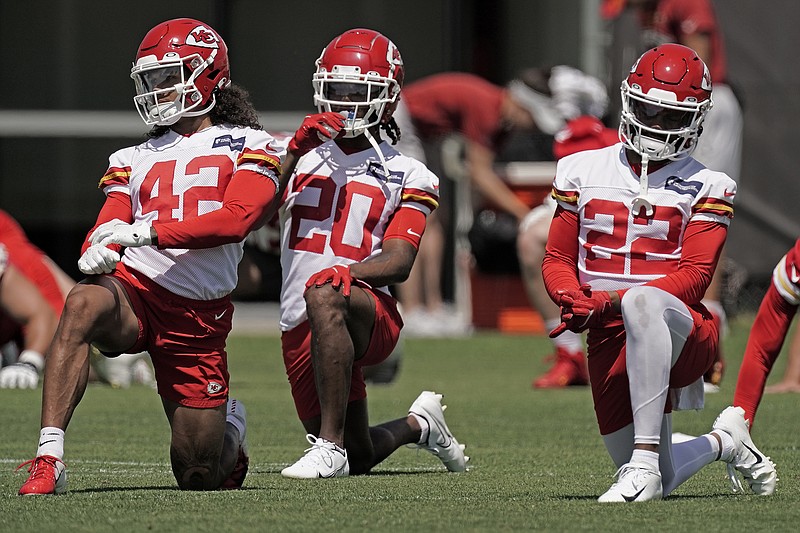 KANSAS CITY (AP) -- The prevailing narrative was that the Kansas City Chiefs signed Justin Reid away from the Houston Texans in free agency when they decided to move on from three-time All-Pro safety Tyrann Mathieu.

It was a one-for-one substitution, nice and tidy.

The reality is Mathieu's replacement might have already been on the team in the form of Juan Thornhill, who has been an in-and-out of the lineup starter his first three seasons in the league. With the departure of Mathieu and Dan Sorensen in free agency, Thornhill is the only safety on the roster with much experience in coordinator Steve Spagnuolo's defense.

Thornhill also has a more versatile skillset than Reid, who is the quintessential hard-hitting safety, with a unique ability to not only drop into coverage, but also blitz the quarterback and step into the box against the run.

"I love it, being the oldest guy in the room with a bunch of rookies," the 26-year-old Thornhill said after a sweltering practice during Kansas City's three-day mandatory minicamp. "I need to lead the way, take on that role."

He had a great role model himself in Mathieu, who arrived in Kansas City around the same time Thornhill was drafted.

For the past three years, Thornhill has had the best seat possible to watch Mathieu not only ply his trade on the field, but exhibit the kind of off-the-field leadership that made him invaluable. Mathieu was the ringleader of the defense, the one who got players into the proper position on defense and gathered them at his house for barbecues on days off.

Mathieu, who has experience with two torn ACLs, also helped Thornhill deal with a devastating knee injury that ended his rookie season, and for a while sidetracked what had been a promising start to his career.

"I was really quiet when he was here because I knew that he was the type of guy to be the leader, and I'd just follow in his footsteps," Thornhill said. "Now it's my time to take on that role and get everyone lined up."

That includes Bryan Cook, a second-round pick out of Cincinnati who could become a crucial piece of the defense.

"It's definitely a role I want to take on," Thornhill said. "I want the guys to have fun. Sometimes playing this game, it can feel like there's a lot of pressure on you, but we don't want that pressure. We just want to go out there and have a lot of fun and enjoy the game. That's when you make a lot of plays, when you're comfortable and bonding on the field."

Make no mistake: This is a big year for Thornhill.

He started all 16 games as a rookie fresh out of Virginia, making 58 tackles with three interceptions and a touchdown. But the injury lingered into Year 2, when he started just eight of 16 games and watched his playing time dwindle, and Thornhill was left fighting for his place in the base defense headed into last season.

He wound up starting 12 of 17 games with a career-high 64 tackles, setting him up well for a crucial contract year.

The Steelers reportedly set the market for safeties earlier Wednesday when they agreed with Minkah Fitzpatrick on a $73.6 million multiyear deal that includes $36 million guaranteed. That follows big contracts that have been handed out to Seattle's Jamal Adams, Baltimore's Marcus Williams and Justin Simmons of AFC West rival Denver.

"I got high expectations. It's as simple as that," Thornhill said. "I'm planning on playing my best football, by far -- at the top of my game. I'm expecting an All-Pro season. I'm saying that right now."

In other news, the Chiefs said defensive end Frank Clark was excused from practice for the second straight day while rookie cornerbacks Trent McDuffie and Joshua Williams did not work out after leaving with trainers Tuesday.

Others that did not practice included left tackle Orlando Brown Jr., who has yet to sign his franchise tender and is not required to report; running back Jerick McKinnon, who was signed just this week; backup offensive lineman Prince Tega Wanogho; defensive end Malik Herring; and right tackle Lucas Niang, who is still rehabbing a knee injury.

Chiefs coach Andy Reid is expected to discuss the minicamp after the final practice today, then the Chiefs will take the rest of the summer off before reporting in late July to their training camp at Missouri Western State University.