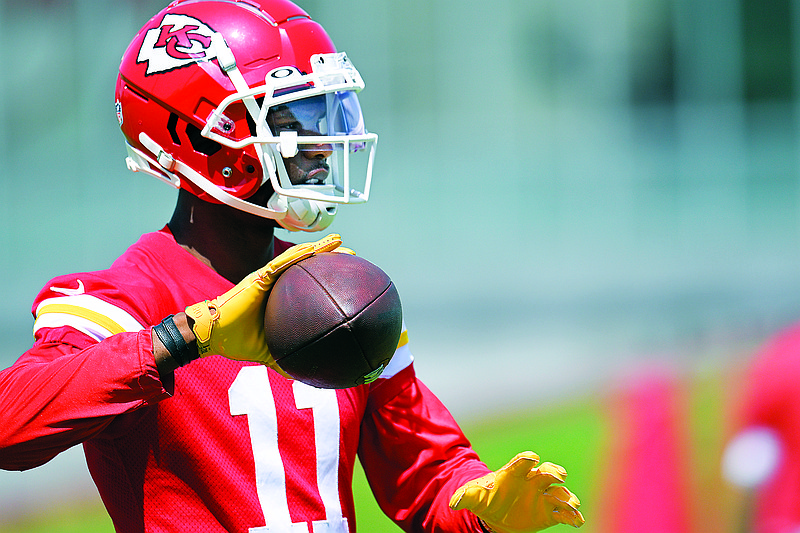 Chiefs wide receiver Marquez Valdes-Scantling prepares to throw the ball back during minicamp Tuesday in Kansas City. (The Associated Press)

KANSAS CITY — Patrick Mahomes walked onto the field for the start of the Kansas City Chiefs’ mandatory three-day minicamp with his right tackle standing off to the side in a bucket hat and his Pro Bowl left tackle nowhere to be found.

That wasn’t the only thing Mahomes found different Tuesday.

Three of his longtime targets, including Tyreek Hill, also were gone amid free agency and offseason dealings. In their place was a bunch of new faces — former Packers deep threat Marquez Valdes-Scantling, former Steelers star JuJu Smith-Schuster and rookie wide receiver Skyy Moore. They will have big shoes to fill.

It didn’t take long for them to learn life with Mahomes at quarterback is just a little bit different.

“Today he did the no-look pass and he got me, and I was on the sideline,” Smith-Schuster said with a smile. “I thought I was the only one who saw it. It got a linebacker, threw him off. I was just like, ‘Wow.’”

The practice was only about 90 minutes, shortened a bit from a regular minicamp because of temperatures that threatened to hit triple digits in Kansas City. But it was a crucial step after three weeks of voluntary workouts for what has long been one of the NFL’s dynamic offenses but is suddenly trying to reinvent itself with new personnel.

Valdes-Scantling may have been the star of the workout, catching a couple of deep balls during a team period, and Smith-Schuster also had a couple nice catches. Moore is still getting up to speed after an offseason injury but was involved in both the first- and second-team offenses’ work, getting a much-needed indoctrination before training camp starts in August.

“I think we’re going to be a great offense. We still have the best quarterback in the NFL, the best tight end in the NFL. We’re going to lean on them,” said receiver Mecole Hardman, who also is being counted upon to pick up some of the slack this season.

“We know they’re going to play every Sunday,” Hardman said. “The new guys, they’re learning the playbook, learning how we play here, the standard we have, so I think we’re going to be good.”

That’s assuming Mahomes can stay on his feet this season.

The Chiefs completely revamped their offensive line prior to last season with overwhelmingly positive results. The new-look bunch is due back with a year of experience behind them.

Two of them were missing from Tuesday’s workout. Right tackle Lucas Niang watched from the side as he continues recovery from knee surgery. Left tackle Orlando Brown Jr. was not required to attend because he has not signed his franchise tender.

The Chiefs and Brown, who recently hired new representation, are working on a long-term deal and there is optimism on both sides it will be finished before the July 15 deadline. Otherwise, he would be due $16.7 million on the franchise tag.

“We love Orlando here. He’s a good human being and he’s a good professional,” Chiefs coach Andy Reid said last week. “I think he’s got good counsel, so we just have to work through it. I don’t see anything that’s going to get in the way. Just have the guys working together, keeping everything open, like any other opportunity that you have to do deals with players.

“They normally don’t happen overnight,” Reid added, “so you work through it and you come up with something.”

Defensive end Frank Clark also was absent from practice on his 29th birthday, though a team spokesman said he had been excused. Clark signed a two-year, $29-million contract in March to remain with the Chiefs.

Others that missed the workout were tight end Blake Bell, defensive end Malik Herring, cornerback Rashad Fenton, wide receiver Justyn Ross and offensive lineman Darryl Williams. The Chiefs did not say whether any of them were excused from the workout. Players can be fined about $90,000 for missing the entire minicamp if they are not excused.

Rookie cornerbacks Trent McDuffie, the No. 21 overall pick, and Joshua Williams, a fourth-round selection, left the field with trainers during the workout. The Chiefs did not provide any updates on injured players.